Skip to content
Home » U.S. Politics » The Great Realignment of the Political Parties
Previous Next

The Great Realignment of the Political Parties 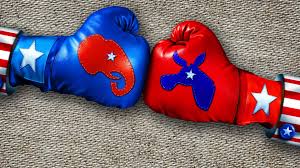 For decades the Democratic Party was synonymous with the blue collar American working class, as the Republican Party aligned itself with big business, but in recent years this has all changed.

Kraushaar continued, Democrats’ hopes for retaining power rest on nonwhite voters remaining a reliable part of the party’s coalition. Democrats’ theory of the case collapses if Republicans make even incremental gains with those voters.

The origins of this political realignment of the political parties began with the election of President Obama who was elected with the moniker of “Hope and Change,” but instead of governing as a centrist he pushed progressive policies.

Far too long the Democrats have always stated that there policies always help all Americans but especially low income and the minority communities, except what they enacted had unintended negative consequence of hurting the very communities they intended to help.

Instead of helping the working class with better economic opportunities, the benefits went strictly to the new class of voters that Democrats seem to favor, and that is the academics, the tech elites, college educated professionals, there Hollywood/entertainment benefactors and those in the financial industry.

Hawaii Democratic Sen. Mazie Hirono suggested that Democrats have a hard time connecting with voters because their breadth of knowledge tends to turn people off. This from the same people who stated often that inflation was only transitory, now it’s a permeate part of working class American life and impacting their families.

The knowledge of these Democratic Party elites have impacted the lives of working class Americans over the years who have seen their jobs outsourced overseas, especially to China all the while enriching the new Democratic Party power brokers bank accounts.

One of President Biden’s first official act as president was the elimination of the Keystone XL Pipeline, and with it thousands of well-paying working class jobs.

The new Democratic Party has moved far too far to the progressive left, embracing defund the police, which has resulted in an explosion of crime couple with progressive prosecutors who refuse to enforce the rule of law.  All of this impact low income and the minority communities all the while Democrats remain silent!

The greatest impact of this Democratic progressive soft on crime approach fall’s disproportionality on the minority communities, not on the Democratic Party elites who espouse this approach but they themselves live in multi-million dollar gated communities with 24-hour armed security protection.

The embrace of the Democratic Party’s “New Green Deal” and its extreme environmental policies have led to the cratering of America’s energy independence, which has led to rising energy prices which have directly impacted working class America.

This same insane policy on the environment also extends to education as working class Americans have to send their children to the massive failing public education system which spends around $800 billion. Once parents complained about the progressive woke curriculum being force fed their children they are labeled as domestic terrorists by the Democratic controlled federal justice government system.

In city after city controlled by Democrats 70% of black and Hispanic children can’t do math or English to grade level but are prevented with the opportunity to exercise school choice that Democrat elites enjoy for their own children.

With the recent recall of liberal school board members in San Francisco, one of the recalled school board member Alison Collins lashed out on her defeat by calling the mostly Asian electorate in a Twitter post “white supremacist thinking to assimilate and ‘get ahead,'” and comparing them to a “house n****r” (she added the asterisks and did not spell out the word).

The Asian-American community used to be a reliable Democratic core constituency, but in recent years the Democratic Party has sought to exclude them from education opportunities such has admission to Harvard University in favor of other minority groups with lesser test scores then there children.

Far too often the Democratic Party has relied on ethnic minority groups for their core support and assume they are one monolithic group instead of the diverse group that they are; such as the Hispanic community as a whole.

First Lady of the United States Jill Biden used a derogatory term when she described Hispanics as “breakfast tacos,” which is an insulting term in the same vain as when Democratic Congressional Reprehensive Alexandria Ocasio-Cortez utilizes the term “Latinx” which no one uses and is extremely offensive.

The newly elected Rep. Mayra Flores (R-Texas) slammed the first lady and Democrats on Twitter, writing: “They just don’t get it. Latinos aren’t buying their liberal pandering; we care about the rising costs of housing, food, gas, issues that impact everyday Americans. No matter how loud they yell their made up words, it won’t change the reality of their failed policies.”

Right now as the Democratic Party embraces socialism, many newly arrived immigrants from Venezuela, Colombia, Cuba, and Puerto Rico have rejected socialism as this is why they left their country of origin, so why would they want to embrace it when they saw firsthand its direct impact on their families and the pain that was inflicted.

This is why Republican Senator Rick Scott and Republican Governor Ron DeSantis won their respective races because they catered to the needs of the minority community especially with choice in educational opportunities for their families. Democrats have firmly aligned themselves the powerful teachers union who favor school closures and decidedly anti-school choice.  The Democratic Party elites believe in choice for their children, such as Democratic California Governor had school closures with in home learning for six million of the state’s children, except his children went to in person learning at a private school.

The Democratic Party today has become the party of the coastal, college educated, uber-wealthy, managerial class which benefits from the global division of labor, open borders, and the refusal of Congress to legislate, leaving decision-making in the hands of unelected bureaucrats.

This Democratic elite main concern today is the utilization of the right pronouns, the pushing of the LGBTQ + and the transgender agenda, just look at the exchange between Missouri Republican Senator Sen. Josh Hawley and Berkley law professor Khiara Bridges discussing the insistence that — against all biological evidence — men can menstruate and become impregnated, and the proposition that America is an oppressive racist society, when many Hispanics and people of color would rather be here than anywhere else.

The Republican Party is now fighting for the interest of working class by fighting to control inflation, expand energy production in America to reduce gas prices instead of relying on autocratic regimes for the nation’s energy needs.

The Republican Party is not ashamed of the true blue collar hard working Americans who have been taken for granted by the Democratic elites, and want to give choice in education, control the border and place in sensible immigration policy instead of the massive open-border policy of the Democratic Party

The Democrats with their progressive policies have pushed many into the Republican Party and still deride anyone who disagrees with them as racist or white supremacists which only fuels the exodus of the working class and minorities from the Democrats.

If the Democrats don’t wake up they will truly be a coastal white elite progressive party, never to govern at the national level for a generation.