Skip to content
Home » U.S. Politics » The Biden Administration in Chaos!
Previous Next

The Biden Administration in Chaos! 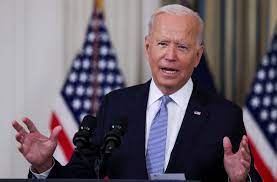 The media proclaimed the election of Joe Biden as president would usher in a period of normalcy and restore sanity back to the White House after four years of the turbulent Trump years, unfortunately instead of sanity America got chaos.

One may not have like President Trump’s bellicose rhetoric, and were looking for more calm and as we were told by a complicit and partisan media that with President Biden in the White House we now have the grown up’s running U.S. domestic policy and will restore America’s tarnished image to our allies and be a bulwark to our adversaries.

Instead America got the polar opposite!

On Friday, the Bureau of Labor Statistic released its report that inflation is running at 8.6% from a year ago and with no end in sight, and gas prices have hit a record $5 a gallon on average across the country.

Currently the economy is in free fall with the Stock Market ls losing ground at a precipitous pace, with families facing higher costs in all areas of basic living.

President Biden seems to blame everyone else for this dire economic news from corporations, to the pandemic and even Russia’s invasion of Ukraine.  What Biden fails to understand is that all this was happening way before Russian President Vladimir Putin decided to make his ill-fated invasion of Ukraine.

Do we remember the establishment economists and the grownups in the Biden administration that lectured the nation that massive government borrowing, increases in the monetary supply, actively incentivized by public policy labor non-participation, and placed obstacles that only exacerbated supply chain disruptions. That this would have no impact on inflation?

Anyone who took a rudimentary course in macroeconomics would have known this was doomed to failure and would only increase inflation, but the grown-ups knew otherwise, now America is feeling the impact of their failed progressive policies.

As soon as Biden was sworn into office he did everything to end America’s energy independence by canceling the Keystone XL Pipeline, energy permitting and leases on federal lands, placed byzantine regulations on domestic production, but encourages OPEC and Venezuela to import more oil to the U.S.

Does anyone wonder why we are at an average of $5 a gallon for gas and many energy experts anticipate $6 by Labor Day, with many expecting the nation to experience rolling brownouts this summer. This is what experience brings you!

As the nation reels in the continued crisis of a shortage of baby formula, where are the cabinet secretaries such as Transportation Secretary Pete Buttigieg, Commerce Secretary Gina Marie Raimondo, who when interviewed on CNN stated that the administration is doing a great job on the baby formula, but in the same breath stated she is not involved.

His agency oversees the Food and Drug Administration, why hasn’t he been pressed for more answer’s considering he stated he knew about this for some time, but when did he first become aware of this crisis? Industry leaders have been pressing the Biden administration for action to no avail.

Has Biden held anyone accountable?

Where any of these cabinet secretaries understand their duties of the agencies they run, given all of them had slim resumes to the positions appointed, or where they appointed to fulfill some progressive woke political agenda?

Foreign policy was supposed to be Biden’s expertise, but look how that has gone.

The fatal American withdrawal from Afghanistan which we left in the middle of the night, leaving over $80 billion in U.S. weapons to the Taliban, abandoned a key U.S. air field after spending billions on refurbishing the air field, and leaving countless U.S. civilians behind, then when we went back resulted in a chaotic scene resulting in the deaths of 13 service personnel.

The nation’s national security leaders called this operation a logistical success, based off what metric?

If this wasn’t bad enough, a surgical strike against the terrorist who killed the 13 service personnel, killed innocent civilians instead and Biden still believes this was a success, my question then in his minds what is a failure?

Look at the rest of Biden’s foreign policy; it’s always the moniker I didn’t see it coming. Biden failed to prevent the war in Ukraine, instead of rearming Ukraine early and forcibly telling Putin what we will do to his forces if they enter the country, the president was always reacting to events instead of being proactive. Far too often Biden tells Putin what he won’t do, so this gives the Russian leader and edge and being one step ahead of the U.S.

I ask anyone tell me one area of the world where the Biden administration has been successful?

Relations with China, the Middle East, immigration, relationships with our allies, just name one region of the world where Biden has been successful?

Maybe the media instead of being an arm of the Democratic Party would do their job and ask Biden tough question and report on his administrations failures, unfortunately they won’t they are too invested in the Democrats and the Biden administration to change course.