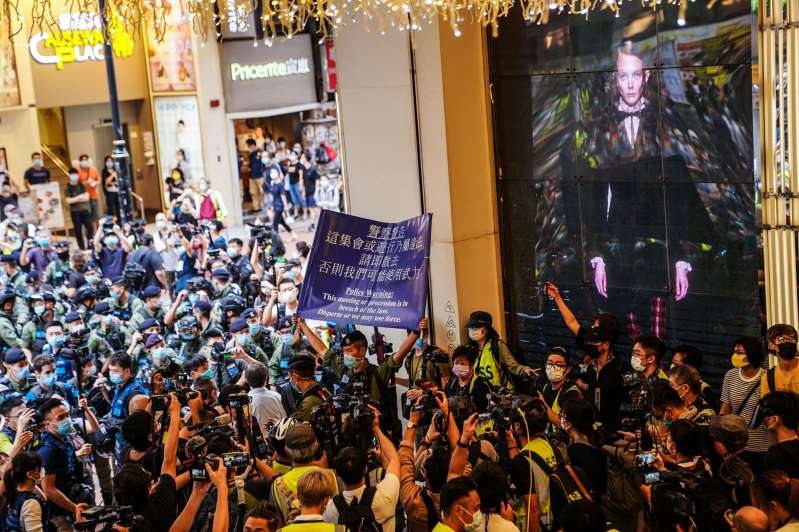 Taiwanese and Hong Kong activists expressed alarm over reports that China was compiling a global watch list of those who have voiced views deemed separatist, a move that would mark a major escalation in Beijing’s pursuit of its critics.

China is gathering names of prominent advocates of Taiwanese independence, Beijing-backed newspaper Ta Kung Pao reported earlier this week. The list could include activists both in Taiwan and abroad as well as those who helped fund such activities, Ta Kung Pao said, citing officials it didn’t name. The newspaper is among the publishing operations controlled by China’s government through its Hong Kong Liaison Office.

© Bloomberg Riot police raise a purple flag warning demonstrators that they may be in violation of the national security law during a protest in Causeway Bay district on National Day in Hong Kong, China, on Thursday, Oct. 1, 2020. Hong Kong leader Carrie Lam declared a return of stability, even as authorities deployed thousands of riot police and threats of arrests to deter protesters from returning to the streets in the Asian financial center.

Meanwhile, state broadcaster Shenzhen Satellite TV noted in a commentary over the weekend that secession was criminalized by the national security law imposed on Hong Kong in June, a measure that also covers those advocating Taiwan’s independence. The legislation includes a controversial provision that applies to non-residents residing overseas.

“They will no longer be able to set foot in Hong Kong, Macau and the Chinese mainland and it will also be very dangerous for them to travel to other countries and regions,” the Global Times said Monday in an editorial. “In short, this list will be a ‘sword of Damocles’ hanging over their heads for a long time to come and they will never know when it will come down.”

Ex-Hong Kong lawmaker Nathan Law, 27, who fled to London from the former British colony before the security law’s enactment, said the reports showed that Beijing planned to raise the stakes. “The list will definitely impose a stronger level of white terror and send a threatening signal to those in Hong Kong and in Taiwan that they dare not travel to Hong Kong, China and the other places anymore,” Law said.

While no Chinese law enforcement agency has confirmed plans for such a list or what it would entail, Beijing has been seeking to increase pressure on Taiwanese President Tsai Ing-wen after her re-election to a second four-year term in January. China’s Communist Party, which views the island as part of its territory despite never controlling it, has stepped up military patrols in recent months and lured away several of Taipei’s few remaining diplomatic partners over past few years.

Chinese Foreign Ministry spokesman Zhao Lijian on Tuesday referred questions about the list to the “competent authority,” without elaborating. “What I can tell you is China is determined to safeguard its national unity and territorial integrity. No separatist attempt will succeed, its only outcome is total failure,” Zhao told reporters.

Any effort to pursue Taiwanese and Hong Kong activists overseas could quickly escalate into a diplomatic dispute. Last month, the U.S. charged eight people, including six Chinese nationals, with a three-year effort to intimidate a U.S. resident into returning to China to face charges as part of the “Operation Fox Hunt” anti-corruption campaign.

Xiaoyu Lu, a research fellow at the Australian National University with expertise in China’s foreign policy, said Beijing could be seeking to exercise international reach the way the U.S. does with measures such as Magnitsky sanctions against human rights offenders. “China is facing global pressure right now on their human rights record, but China also has global influence and it’s hoping to use its international allies in a more cross-board transactional manner to target Taiwanese activists and politicians,” Lu said.

A list of Taiwanese people who support independence could theoretically include millions of names, since government surveys show about one-quarter of the island’s roughly 23 million inhabitants back a legal separation at some point. Taiwanese Premier Su Tseng-chang, who the Global Times editorial named as one prominent example, told reporters Tuesday that he would “guard the country and protect people without giving in to military force.”

Taiwan’s Mainland Affairs Office said any list would be “counterproductive” and ineffective. “China’s attempts to intimidate Taiwanese into self-censorship and incite cross-strait confrontation with such extreme agenda, has destroyed cross-strait peace and stability,” the Taipei-based agency said in a text message.

The list was reminiscent of a series of playing cards featuring the images of 13 Taiwanese politicians that circulated on Chinese social media in 2018 amid a debate over whether they should be blacklisted from the mainland. Huang Kuo-chang, a former Taiwanese lawmaker and independence activist who was on that list, said such intimidation “has always been there.”

“I don’t see the Taiwanese independence movement affected by the list as this is old news and old tricks,” Huang said. “At least I won’t change my own behavior because of the list.”