Stock futures limp into final trading session of the quarter 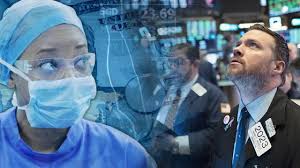 U.S. equity futures are pointing to a lower open when the final session of the second quarter begins on Wall Street.

The major futures indexes suggest a decline of 0.3 percent.

Analysts say questions remain on how the global economy will hold up as coronavirus outbreaks expand.

Fed Chairman Jerome Powell and Treasury Secretary Steven Mnuchin are slated to testify before the House Financial Services Committee as part of quarterly appearances required by the $2 trillion coronavirus relief package Congress approved in March, which provided more than $450 billion for the Treasury to cover losses in emergency lending programs run by the Fed.

A survey of China factory managers released Tuesday was better than expected, suggesting the global economy may be on the upswing after bottoming out at the height of shutdowns in April-May, analysts said.

The United States is ending its special treatment of Hong Kong as separate from mainland China, with both the State and Commerce departments announcing actions Monday that will pare back its special status. This comes after Beijing ushered a sweeping national security law through its rubber-stamp parliament last month that will drastically increase mainland China’s control of Hong Kong.

Monday’s report on the housing market showed the number of Americans signing contracts to buy homes rose a record 44.3 percent in May from a month earlier. That was more than double the 17 percent rise that economists were expecting and a whiplash reversal from the record-breaking plunge of nearly 22 percent that came in April as the pandemic froze the market.

GET FOX BUSINESS ON THE GO BY CLICKING HERE

The Associated Press contributed to this article.