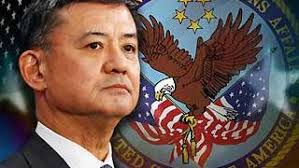 On Friday, President Obama announced and had accepted Director of Veteran Affairs Secretary Eric Shinseki resignation.  Shinseki would be taking the fall for the scandal which has engulfed the VA, but to many this was long overdue especially when members of both parties have called for his resignation.

President Obama stated, “A few minutes ago, Secretary Shinseki offered me his own resignation,” the president said in a statement in the White House briefing room. “With considerable regret, I accepted.”

The president continued to praise Shinseki for his years of honorable service to his country as a soldier, and as a member of his administration.

“He has worked hard to investigate and identify the problems with access to care, but as he told me this morning, the VA needs new leadership to address them,” the president said. “He does not want to be a distraction because his priority is to fix the problem and make sure our vets get the care that they need. That was Ric’s judgment on behalf of his fellow veterans. And I agree. We don’t have time for distractions. We need to fix the problems.”

With the resignation of Shinseki, the president has named Sloan Gibson as acting VA director until a permanent replacement is found.  Gibson previously served as Deputy Secretary of Veterans Affairs, and President of the United Service Organizations (USO). Gibson has also served his country in the U.S. military, having graduated from the West Point Military Academy.

Shinseki had faced a withering barrage of criticism since the scandal first broke, and when the IG presented its findings of systematic abuses and gross mismanagement the call grew louder for his resignation.

The call for his resignations began growing with the release of the IG’s report, with 12 Senate Democrats calling for Shinseki to step down.

Various veterans’ organizations reacted to Shinseki’s resignation with the Veterans of Foreign Wars (VFW) stating an “American patriot” whose commitment to veterans is “above reproach,” but said his resignation was in the best interests of the nation’s veterans.

Continuing,  the VFW said Shinseki’s successor “will inherit a host of ongoing challenges, but he or she must immediately identify and fix what’s broken, to hold people accountable to the maximum extent of the law, and to do whatever is necessary to help restore the full faith and confidence of veterans in their VA.”

The American Legion commented, “Shinseki’s resignation “is not the solution, yet it is a beginning.”

“Too many veterans have waited far too long to receive the benefits that they have earned,” the organization said in a statement. “Wait times are increasing even for fully developed claims. But it was never just about a few of the top leaders. The solution is to weed out the incompetence and corruption within

[the VA] so the dedicated employees can continue to perform admirably on behalf of our nation’s veterans.”

Iraq and Afghanistan Veterans of America issued a press statement, signaling deep systematic failure at the VA, which goes far beyond the resignation of Shinseki.

“President Obama now has the opportunity and a moral obligation to step up and demonstrate his own leadership and bring under control a deep systemic element of incompetence and corruption that clearly exists in the VA. Regardless of the long history of troubles at the VA, this crisis has occurred under his watch, and America’s vets are looking to the Commander in Chief to act quickly. President Obama must move now to appoint an energetic Secretary who is unafraid to make bold changes and work quickly and aggressively to change the VA system. Over 9 million vets who rely on its care are depending on it,”

The resignation of Shinseki, doesn’t end the bureaucratic mess which all veterans know firsthand of.  As someone who has served in both Iraq and Afghanistan I know all too well the chaotic dysfunction associated at the Veterans Affairs.

Both political parties now have the chance to now overhaul Veterans Affairs.

Now is not the time to score political points or in some cases, with members of Congress have now becoming outraged over this scandal as this might hurt them in the 2014 mid-term elections.

It’s time to finally give the Veterans Affairs a much needed overhaul with a true bi-partisan investigation, independent of any government agency or political party.

Veterans gave all for this country now it’s the nation’s turn to serve them.