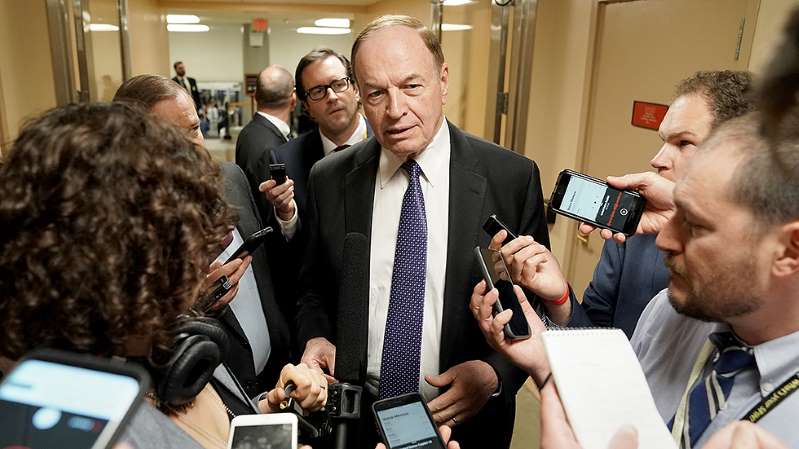 By Jordain Carney, The Hill–

Alarm bells are starting to go off on Capitol Hill over a looming fight to fund the government and prevent a shutdown later this year.

Though Congress has until the end of September to pass legislation preventing another funding lapse, lawmakers are sending up warning signs to their colleagues and the White House that they are heading toward a fall train wreck, with deadlines for raising the debt ceiling and preventing across-the-board budget cuts and the second shutdown of the year all in the same month.

Senate Appropriations Committee Chairman Richard Shelby (R-Ala.) on Wednesday said he highlighted the deadlines, and the consequences for failing to get a budget deal, during a GOP lunch this week with Vice President Pence and in a phone call with acting White House chief of staff Mick Mulvaney.

“That’s what I told our caucus – that this will be draconian,” he said, referring to the looming cuts. “They probably haven’t thought about it much because they think we’ll take care of it.”

Asked if he thought the White House understood how steep the spending cuts would be, Shelby demurred, then said he was going to meet with President Trump.

The growing concern about the chances of getting agreements to raise the budget caps and fund the government comes as Congress and the administration have struggled for months to strike a smaller deal on a stalled package of disaster recovery aid.

Sen. John Thune (S.D.), the No. 2 Senate Republican, said the struggle to reach a deal on disaster aid was “not a good bellwether” for the rest of the fiscal year.

Senators appeared optimistic late last week that they would be able to reach a deal on the recovery legislation after Shelby and Sen. Patrick Leahy (D-Vt.) swapped offers.

But they ran into a “hiccup” over the weekend, and senators signaled this week that the administration’s $4.5 billion request for emergency funding for the border was complicating the talks. With legislation slowing to a crawl in the Senate, the White House has a limited number of must-pass bills it could try to attach the border funding to.

“Well, we have to see what exactly he wants,” Minority Leader Charles Schumer (D-N.Y.) told reporters during a weekly press conference, referring to Trump. “But you know, again, he complicated up the disaster bill once. Maybe now he’s doing it twice. That’s what it seems to be.”

The disaster aid bill stalemated more than a month ago after Trump criticized Puerto Rico’s handling of recovery money during a closed-door Republican lunch. He tweeted this week that “Puerto Rico should be very happy and the Dems should stop blocking much needed Disaster Relief!”

Shelby acknowledged Wednesday, more than a month into the standoff, that he doesn’t know what the White House wants in the legislation in order for Trump to sign it. But he urged the administration to take the win on being able to provide relief for a spate of recent disasters in the Midwest and Southeast.

Asked if he thought Mulvaney was playing a “constructive” role in the disaster relief negotiations, Shelby responded by saying: “Constructive role? He’s certainly playing a role.”

The disaster bill pales in comparison to the months-long process for preventing an October shutdown – budget deals in Congress followed by passing 12 appropriations bills.

The limbo status in the Senate comes as House Democrats are pushing ahead with their own spending plan, setting up a clash with GOP senators and the White House as the fall deadlines draw closer. House Democrats are aiming to pass all 12 of their appropriations bills next month, potentially giving them an opening for leverage in the upcoming funding negotiations.

Thune said Wednesday that he expects several Senate Republicans will want to get a two-year budget deal but hadn’t gotten a clear signal from the White House if the administration would accept such an agreement.

“The White House is going to have to be a part of that conversation. I think a lot of our members would love to see a caps deal, if we could work something out with the House, get a two-year deal. But at the moment I don’t know if that’s something the White House would support,” he said.

A Democratic leadership aide added that talks are underway but declined to give an update on the status of negotiations. The source dismissed any link between the roadblocks on disaster aid and potential funding headaches for Congress in the coming months, saying one has nothing to do with the other.

“Shelby hasn’t been given clear direction on where we’re going. He wants to go to work and I want to join him. Without a number, we’re at a loss,” he said, referring to the need for topline defense and nondefense figures.

Republicans prided themselves on their appropriations work last year, when they passed all 12 bills in the committee by the end of June. But even that high-water mark ended in multiple short-term spending bills and a 35-day partial government shutdown, the longest in U.S. history.

Shelby said he warned Mulvaney and his colleagues that if they can’t resolve disaster aid it would be a “bleak winter” as they try to fund the government.

“I told the caucus and I told Mulvaney, too … the disaster bill is very important,” Shelby said. “But it pales in comparison to what the next thing is – the big regular appropriations. If we can’t work this out, we’re going to have a bleak winter.”

He added to reporters, “You guys will be here a long time. So, don’t plan any vacations.”