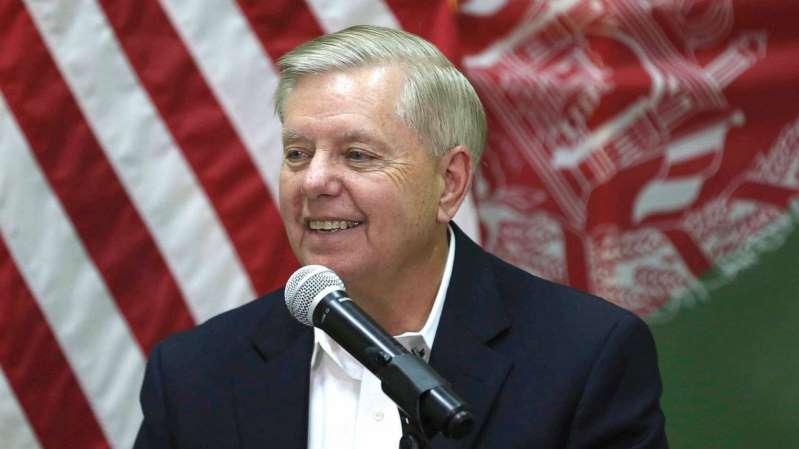 Sen. Lindsey Graham said on Monday that President Donald Trump could decide in the next few weeks to announce a partial withdrawal of thousands of U.S. troops from Afghanistan.

During a visit to Kabul, the South Carolina Republican said he could support a decision by Trump to reduce troop levels from about 12,000 to 8,600 — a figure that Trump expressed support for this past August.

“The Afghan security forces are getting more capable,” Graham told reporters in Kabul. “As they achieve capability, the number of U.S. forces necessary can go down.”

During a visit to Kabul, the South Carolina Republican said he could support a decision by Trump to reduce troop levels from about 12,000 to 8,600 — a figure that Trump expressed support for this past August.

“The Afghan security forces are getting more capable,” Graham told reporters in Kabul. “As they achieve capability, the number of U.S. forces necessary can go down.”

The president has long advocated for a reduction in the number of American forces in Afghanistan and the Middle East. Most recently, he told service members during a surprise Thanksgiving visit to Bagram Air Base, the largest U.S. base in Afghanistan, that he would “reduce” forces there “very substantially.”

But the partial withdrawal could be seen as a key concession to the Taliban by making clear Trump’s intent to pull all troops out of the country, possibly undermining the U.S. negotiating position following the initial collapse of peace talks this fall.

In a statement, U.S. Forces Afghanistan said they had not received orders to reduce troops levels.

Earlier this month, Defense Secretary Mark Esper said that reducing forces is not contingent on a peace deal with the Taliban, saying that there has been a “marked improvement” in the performance of Afghan Security Forces that are “leading the way” against extremist groups like the Taliban and ISIS with U.S. support.

“The commander feels confident we can go down to a lower level without jeopardizing our ability to ensure that Afghanistan doesn’t become a safe haven for terrorism,” Esper told the Reagan Defense Forum on Dec. 7.

The secretary said he’s in favor of the reduction in order to “reallocate” U.S. troops to the Asia-Pacific region to deter aggressive actions by China.

But any draw down of U.S. forces would come without an agreement between U.S. negotiators, led by special envoy Zalmay Khalilzad, and the Taliban. Those talks nearly reached a final agreement in September before Trump invited the militant group to Camp David, rescinded, tweeted about it, and declared talks “dead.”

This month, the two sides restarted negotiations, with a State Department official telling ABC News, “The focus of discussion will be reduction of violence that leads to intra-Afghan negotiations and a ceasefire.”

Instead, the talks took a break last Thursday after a Taliban attack the day prior on an abandoned medical facility outside Bagram. Khalilzad said he “expressed outrage” to Taliban negotiators and both sides agreed to “a brief pause for them to consult their leadership on this essential topic” of a reduction in violence.

Taliban spokesperson Suhail Shaheen made no mention of that in his readout, saying the meetings were “good and positive” and would resume after “a few days’ breaks and consultations.”

A full U.S. withdrawal has been a sticking point of negotiations. While the Taliban are demanding all U.S. troops depart the country, some U.S. officials are pushing for a residual counter terrorism force.

The timeline of that withdrawal is also a key issue, with the U.S. pushing for the militant group to sit down to talks with the Afghan government before all troops are out — and America’s strongest piece of leverage is gone.

Nineteen American service members have been killed in Afghanistan in 2019, making it the deadliest year for U.S. forces there in five years.

Editor’s Note: This story has been corrected to reflect that Sen. Graham said a troop drawdown announcement could come in a matter of weeks, not this week as was reported earlier.