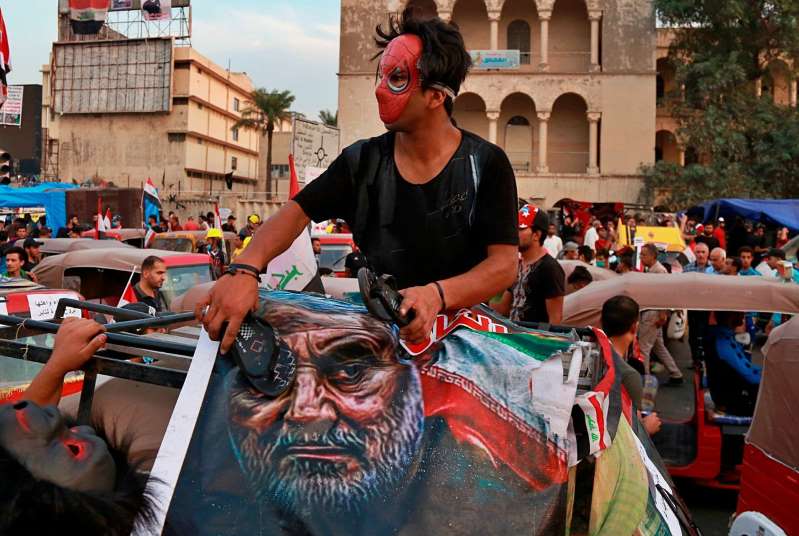 Iraqi protesters attacked the Iranian consulate in the city of Karbala, in the latest sign of mounting anger against Tehran’s involvement in the country’s affairs.

The attack on the consulate came days after Iraq’s top cleric warned foreign powers, including Iran, not to interfere in Iraq. It also followed weeks of accusations by protesters and human-rights organizations against Iranian-backed militias for alleged violence against protesters.

The protests, which began in October, are rooted in grievances about government services, but have expanded into demands for the toppling of the entire political class.

Over the weekend, thousands of protesters blocked access to the vital Umm Qasr port near the southern city of Basra, in an apparent attempt to impose an economic toll on the government.

They also blocked roads and shut offices and schools in Baghdad.

Prime Minister Adel Abdul-Mahdi’s pledge last week to resign once a successor is found failed to quell the demonstrations, largely because it was seen as an attempt to buy time while the main political blocs agree on a candidate.

Mr. Abdul-Mahdi on Sunday called on protesters to allow the country to return to normal, without mentioning his offer to resign.

Anger against Iran has escalated, particularly in the southern provinces where Tehran has the most influence. Karbala—one of the world’s main Shiite pilgrimage sites—holds enormous importance for Iran.

Iraqi protesters last year torched the Iranian consulate in Basra in a similar attack, although the protests that triggered it were smaller.

The rage against Iran has been fueled by allegations by human-rights groups that paramilitary groups backed by Tehran have killed and abducted protesters as part of a crackdown by security forces that has killed more than 250 people since the protests started.

Protesters in Karbala last week carried banners reading, “Iran is the reason for the catastrophe.”

In his weekly Friday sermon in Najaf, Iraq’s top Shiite authority, Grand Ayatollah Ali al-Sistani, who was born in Iran and disagrees with Iran’s Supreme Leader on religious issues, warned that “no international or regional party” should interfere with the will of the Iraqi people, referring to Iran.