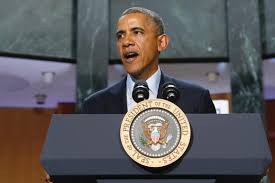 Over the past year President Obama has been criticized at home and abroad on his handling of foreign policy.  On Wednesday, the president will use his commencement address at the U.S. Military Academy at West Point to launch his foreign policy strategy for his remaining time in office.

A White House official stated on Saturday, “You will hear the president discuss how the United States will use all the tools in our arsenal without over-reaching.”  Continuing, “He will lay out why the right policy is one that is both interventionist and internationalist, but not isolationist or unilateral.”

The president routinely mentions he will not be repeating the mistakes of his predecessor George W. Bush who led the U.S. into wars in Iraq and Afghanistan.

Many of the critics inside the United States and our overseas allies look at the examples of how the president handled the Ukraine crisis, which many attribute to have only emboldened China in its territorial disputes with neighboring countries.

Syria, was a foreign policy disaster for the president after issuing a redline over Syria’s use of chemical weapons on its own people, then quickly backing away from use of military force.

Russia was allowed to broker an agreement, but the bloody civil war continues and   President Bashar al-Assad remains in power, even when in 2011, the president stated he needed to go.

Other foreign policy trouble spots have continued to haunt this president, including the confusing and chaotic nature on how the president dealt with Arab Spring, which still continues today.

Poland’s former president and Nobel Peace laureate, Lech Walesa, had strong words for the president.   Speaking to the Associated Press last week, Walesa, said the “world is disorganized and the superpower is not taking the lead.”

Walesa will be meeting with the president in June in which he will say to the president, “Either you want to be a superpower and guide us, or you should give the superpower to Poland and we will know what to do with it.”

A White House official stated, “Obama will say the United States is the only nation capable of galvanizing global action and why “we need to put that to use in an international system that is sustainable and enduring, and that can address challenges from traditional ones, like maritime and trade issues, to emerging ones, like climate change.”

The problem is that the president and his administration see the world as they wish it to be, not the world they are in.

Too often the president and his advisors have a hard time conceptualizing the unique role the United States plays in the world.

“The president’s engagements will explain how we move out of a period of war in Iraq and Afghanistan to a new stage in our engagement with the world, what we expect to accomplish over the next 2.5 years of the administration, and how our approach in hot spots like Ukraine, Iran and Syria fit into that construct,” a White House official said.

The real follow up to the president’s foreign policy address will not be what he says but what his actions will be as we move forward.