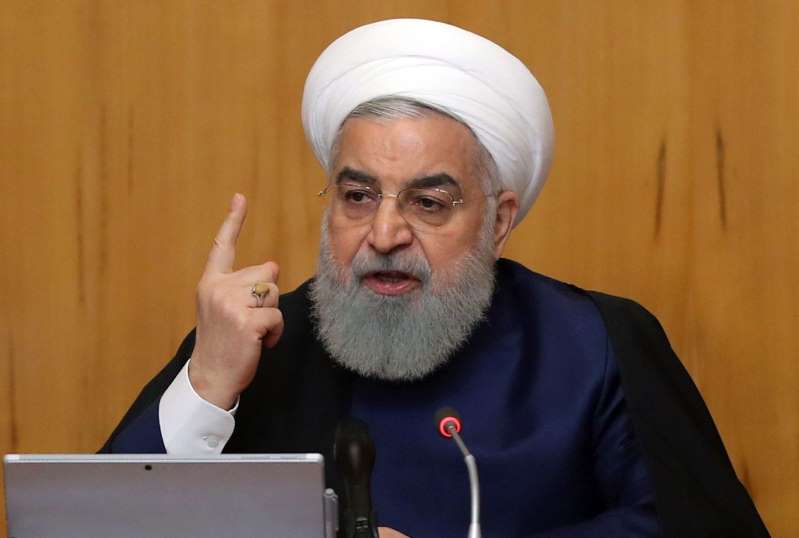 Iran’s president announced on Wednesday that the nation would stop complying with some parts of the nuclear accord it signed with world powers as President Donald Trump’s administration has ratcheted up economic and military pressure on Tehran.

Hassan Rouhani said his country would reduce its compliance with the 2015 deal. The declaration came on the one-year anniversary of Trump’s complete withdrawal from an agreement that limited Iran’s nuclear program in return for sanctions relief.

Rouhani said Iran will start keeping excess uranium and “heavy water” from its nuclear program inside the country – as opposed to selling it internationally – in a move that effectively amounts to a partial breach of the deal. He also set a 60-day deadline for new terms to its nuclear accord, absent the U.S., with Britain, France, Germany, China, Russia and the European Union or threatened to resume higher uranium enrichment.

“We felt that the nuclear deal needs a surgery and the painkiller pills of the last year have been ineffective,” Rouhani said in a nationally televised address.

“This surgery is for saving the deal, not destroying it.”

Iranian Foreign Minister Mohammad Javad Zarif, who was in Moscow, tweeted: “After a year of patience, Iran stops measures that (the) U.S. has made impossible to continue.” Zarif warned world powers have “a narrowing window to reverse this.”

The announcement came as the White House has appeared to inch closer toward a military confrontation with Iran than at any other time during Trump’s presidency. The Pentagon has redirected aircraft bombers and a carrier strike group to the Middle East after claiming it intercepted intelligence indicating that Iran or its proxies in the region might be preparing attacks on American military troops and facilities.

Last month, Trump designated Iran’s Islamic Revolutionary Guards Corp, an elite wing of the nation’s military that is also a broad pillar of the state and whose tentacles extend to a large role in economic, political and social affairs, a terrorist organization.

Secretary of State Mike Pompeo took an unscheduled trip to Iraq on Tuesday where he told reporters that he met with Iraqi Prime Minister Adel Abdul Mahdi and briefed Iraqi officials on the “increased threat stream that we had seen” from Iranian forces.

“We talked to them about the importance of Iraq ensuring that it’s able to adequately protect Americans in their country,” Pompeo said.

“I think everyone will look at the Iranian decision and have to make their own assessment about how much increased risk there is,” he added.

There are about 5,000 U.S. troops serving in Iraq. After pulling out of the nuclear deal, the Trump administration has renewed crippling economic sanctions on Iran that have isolated the nation economically and harmed its capacity to export oil.

America’s top diplomat is due to give an address later Wednesday in London where the topic of rising tensions between the U.S. and Iran is likely to come up again. There was no immediate response from the White House to Rouhani’s announcement.

Former President Barack Obama, whose administration negotiated the nuclear deal, sought to block Iran’s progress toward nuclear weapons through diplomacy. The Trump administration, by contrast, has not been shy in its preference for a campaign of “maximum pressure” on Iran and has cut off all contact with the regime as its attempts to bring its oil revenues down to zero through increasingly hard-hitting sanctions.

European signatories to the nuclear accord have meanwhile attempted to stay in the nuclear agreement by establishing a financial mechanism, known as INSTEX, intended to help them circumvent U.S. sanctions, but it has yet not been fully implemented.