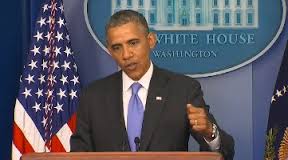 President Obama spoke publicly about the growing scandal at the Veterans Affairs since he first remarked about the controversy last month during his Asian overseas trip.

Since the scandal first came to the forefront last month, when allegations VA officials in Phoenix were accused of keeping a secret set of records in order to cover up wait times for veterans, in which 40 patients died while awaiting care.

The president also stressed his support for embattled Veterans Affairs Director Eric Shinseki.  “The responsibility for things always rests ultimately with me, as the President and Commander-in-Chief.  Ric Shinseki has been a great soldier.  He himself is a disabled veteran.  And nobody cares more about our veterans than Ric Shinseki.  So if you ask me how do I think Ric Shinseki has performed overall, I would say that on homelessness, on the 9/11 GI Bill, on working with us to reduce the backlog, across the board he has put his heart and soul into this thing and he has taken it very seriously.”

To many veterans organizations the president’s remarks ring hollow, according to a CBS news, President Obama and his administration were informed of the inaccurate wait time’s during the presidential transition.

“The problems and causes associated with scheduling, waiting times and waiting lists are systemic,” the officials wrote. The memo urged to “properly document desired appointment dates and ensure patient waiting times are accurate” and failure to do so would affect “quality of care by delaying – and potentially denying – deserving veteran’s timely care.”

This was far different when in 2007 candidate Obama chastised the Bush administration for how they treated veterans.  “After seven years of an Administration that has stretched our military to the breaking point, ignored deplorable conditions at some VA hospitals, and neglected the planning and preparation necessary to care for our returning heroes, America’s veterans deserve a President who will fight for them not just when it’s easy or convenient, but every hour of every day for the next four years.”

In his remarks the president vowed to hold those accountable for manipulating records, wants to have a account of the problem, conduct a broader review of the Veterans Health Administration, and expects everyone involved to work with Congress in its oversight role.

Finally the president remarked, “even as we get to the bottom of what happened at Phoenix and other facilities, all of us, whether here in Washington or all across the country, have to stay focused on the larger mission, which is upholding our sacred trust to all of our veterans, bringing the VA system into the 21st century — which is not an easy task.”

The question, will there be a full accounting of what happened as previous scandals were never given the full oversight needed to hold those responsible.