Skip to content
Home » U.S. Politics » Pelosi tells Trump: No State of the Union address in the House until government is opened
Previous Next

Pelosi tells Trump: No State of the Union address in the House until government is opened 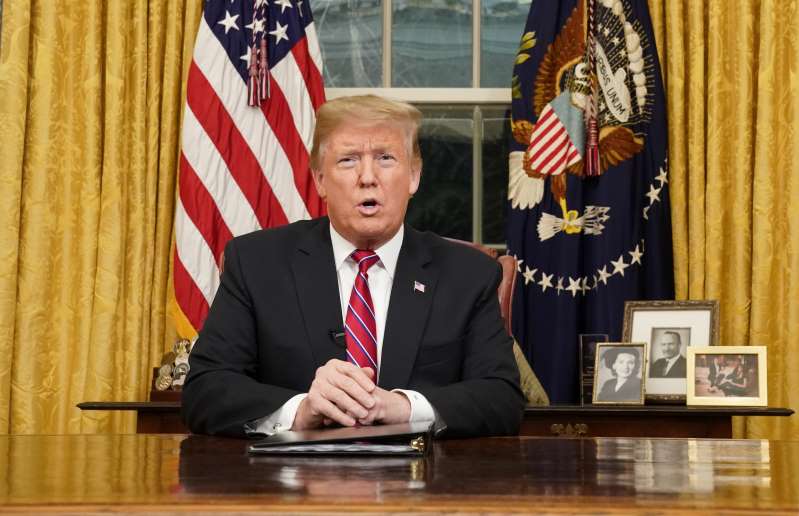 House Speaker Nancy Pelosi (D-Calif.) will not allow President Trump to deliver the State of the Union in the House chamber next week, writing to him on Wednesday afternoon that he can give the annual speech at the Capitol once the government shutdown is over.

Pelosi said when she extended Trump the invitation earlier this month on Jan. 3, “there was no thought that the government would still be shut down.” The partial shutdown, triggered by a partisan standoff over Trump’s demand for a border wall, is now on its 33rd day.

“I am writing to inform you that the House of Representatives will not consider a concurrent resolution authorizing the President’s State of the Union address in the House Chamber until government has opened,” Pelosi wrote to Trump. “Again, I look forward to welcoming you to the House on a mutually agreeable date for this address when government has been opened.

Pelosi’s letter came just a few hours after Trump had informed her that he planned to show up at the Capitol on Jan. 29 to deliver his annual speech to Congress. The sparring between the two leaders reflects the growing acrimony as the partial federal government is now the longest in history, with 800,000 federal workers forced to go without pay and states scrambling to mitigate the impact on the poorest Americans.

The House and Senate must pass a concurrent resolution for a joint session of Congress to hear the president.

“It’s really a shame, what’s happening with the Democrats. They’ve become radicalized,” Trump said. He added: “This will go on for a while. Ultimately, the American people will have their way, because they want to see no crime.”

Pelosi maintained in a brief exchange with reporters at the Capitol that her offer to Trump still stands as long as they are able to find a “mutually agreeable date.”

Shortly before Pelosi released her letter, House Minority Leader Kevin McCarthy (R-Calif.) announced that he had submitted a resolution that would permit the president to deliver his address. But Pelosi’s statement means that the measure stands little chance of being taken up by the chamber.

“I don’t think anyone in America would agree with that position,” McCarthy said when asked about the possibility of Pelosi canceling the speech. “I understand people have different politics. I understand people come from different parties. But the one thing you should do when you’re elected [is] put America’s public first.”

Earlier Wednesday, Trump said in a letter to Pelosi that he is pressing ahead with plans to deliver his address at the Capitol, dismissing the speaker’s concerns about security due to the shutdown.

“It would be so very sad for our country if the State of the Union were not delivered on time, on schedule, and very importantly, on location!” he said.

Pelosi had sent a letter to Trump this month inviting him to deliver his annual address at the Capitol. But with Democrats and the White House at an impasse over Trump’s long-promised U.S.-Mexico border wall, Pelosi wrote to Trump again last week urging him to delay the speech, or deliver it in writing.

Trump responded by denying Pelosi the use of a military plane for a trip to Afghanistan. Pelosi accused Trump of then publicizing her and other lawmakers’ plans to make the journey on a commercial flight, forcing them to abandon the trip. The White House has denied Pelosi’s claims.

In a speech to the winter meeting of the U.S. Conference of Mayors Wednesday afternoon, Pelosi made no mention of the presidential address. She continued to accuse Trump of “holding the health, safety and paychecks of the American people hostage” and said that Democrats fear he may do so again in future if they agree to his demands.

© Manuel Balce Ceneta/AP In this Jan. 19, 2019 file photo, President Trump speak to reporters before leaving the White House in Washington.

“That is why we must hold the line on this shutdown,” Pelosi said.

The House has passed a number of bills that would reopen the government without border wall funding, and Democrats plan another vote Thursday. The Republican-controlled Senate is planning votes Thursday as well on two competing proposals, neither of which is expected to garner the 60 votes necessary for passage.

While Pelosi last week suggested that Trump reschedule the address, until Wednesday, she had not formally rescind her invitation — a detail upon which top White House officials had seized in arguing that Trump’s speech should go forward as originally planned.

In an exchange with reporters Wednesday morning, White House press secretary Sarah Sanders said that the Secret Service and the Department of Homeland Security had “satisfied” the safety concerns raised by Pelosi, without giving further details.

White House counselor Kellyanne Conway said on Fox News that there was uncertainty around the presidential address and that Trump had written his letter “to put that to rest so people can plan.”

First lady Melania Trump has been inviting guests to the State of the Union, she added, and if Pelosi disinvites them, “then she’s going to have some explaining to do.”

“The president intends to go to the chamber on Tuesday night to address our great nation and give them an update on the state of our union,” Conway said. “It would be, I think, remarkably petty of the speaker to disinvite the president of the United States to address the nation that they both serve at the highest level.”

House Majority Leader Steny H. Hoyer (D-Md.) said Wednesday that his own preference would be for Trump to reopen the government and then address Congress.

But he noted that the U.S. Capitol Police and Secret Service would be ready to protect the president if he chose to give his speech, and otherwise did not indicate any logistical obstacles to Trump addressing a joint session of Congress on Tuesday.

Hoyer later declined to weigh in on the maneuvering over Trump’s speech.

“You need to talk to the speaker,” he said Wednesday afternoon.

Mike DeBonis and John Wagner contributed to this report.