Skip to content
Home » U.S. Politics » Pelosi Alerts House To Be Ready to Send Impeachment Articles Next Week
Previous Next 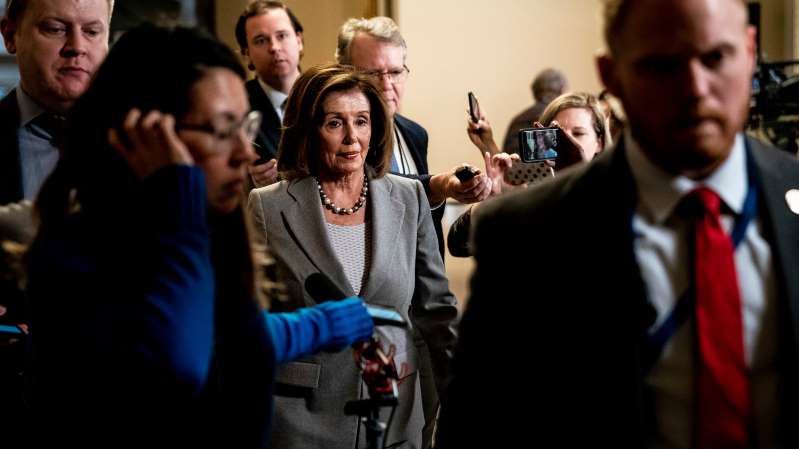 Speaker Nancy Pelosi alerted lawmakers on Friday that she would move next week to transmit articles of impeachment against President Trump to the Senate and prompt a historic trial over charges that the president abused his office and obstructed Congress.

In a letter to colleagues Friday morning, the speaker moved to end a weekslong impasse over the impeachment process that had left the president’s fate in limbo. She did not announce the members of the team she will ask to manage the case, but said the House should be ready to vote to appoint them sometime next week.

“I have asked Judiciary Committee Chairman Jerry Nadler to be prepared to bring to the floor next week a resolution to appoint managers and transmit articles of impeachment to the Senate,” Ms. Pelosi wrote after lawmakers departed the Capitol for the weekend. “I will be consulting with you at our Tuesday House Democratic Caucus meeting on how we proceed further.”

Once the House votes and the articles are transmitted, the Senate’s proceeding, only the third impeachment trial of a sitting president in American history, will begin promptly — as soon as Wednesday based on Ms. Pelosi’s timeline.

The Democratic-led House impeached Mr. Trump on Dec. 18 in a largely party-line vote charging him with abuse of power and obstruction of Congress in connection with a scheme to pressure Ukraine to publicly investigate his domestic political rivals.

Since then, the speaker has elected not to send the articles of impeachment to the Senate in an unusual attempt to pressure the Republican-led chamber to guarantee it would compel additional witnesses and documents Mr. Trump shielded during the House’s inquiry. A trial with no new evidence, Democrats have argued, would fundamentally abet that president’s cover-up.

But Senator Mitch McConnell, Republican of Kentucky and the majority leader, said this week that he had secured the votes he needs to begin a trial on his own terms, without any commitment to Democrats to call witnesses or admitting new evidence. Mr. McConnell has repeatedly condemned the House’s case as rushed and woefully inadequate, without addressing the behavior it alleges by Mr. Trump, and has made clear he would like to bring about a speedy acquittal.

For weeks now, Mr. McConnell “has been engaged in tactics of delay in presenting transparency, disregard for the American people’s interest for a fair trial and dismissal of the facts,” Ms. Pelosi wrote in her letter.

In recent days, Ms. Pelosi found herself beating back questions about her strategy amid growing pressure from Republicans and some Democrats eager for the proceeding to move forward. But as recently as Thursday, she told reporters that she would keep her own counsel and refused to share details about when she would act beyond saying it would be “soon.”

She had asked once more for Mr. McConnell to share the precise rules for a Senate trial so she could select her prosecutorial team. He declined, and the speaker decided on Friday to move ahead anyway without a concession.

Despite winning no commitment from Mr. McConnell, Democrats argue that the strategy did have payoffs. During the intervening three weeks between the House vote and Ms. Pelosi’s announcement, relevant new documents that Mr. Trump suppressed have come to light, suggesting that there is additional evidence to support the charges the House brought. And this week, a pivotal witness who declined to cooperate in the House impeachment inquiry, the former national security adviser John R. Bolton, said he would be willing to testify at the trial if senators subpoenaed him.

Still, Ms. Pelosi had come under mounting pressure to move the case along. Republicans spent weeks accusing her of hypocrisy for waiting to prosecute Mr. Trump after months of insisting that he posed an urgent threat to the integrity of the 2020 election that must be addressed with a speedy impeachment vote. Democrats privately worried that argument could gain traction with the general public, undermining months of hard work in the House.

Though presidential impeachment precedent is scant — the House has only charged two past presidents, Bill Clinton and Andrew Johnson — Ms. Pelosi’s move was unusual.

The House impeached Mr. Trump after months of investigation and testimony from officials in his own administration who described a scheme to pressure Ukraine to publicly investigate the president’s political rivals. The Democratic inquiry concluded that Mr. Trump withheld about $400 million in vital military aid for Ukraine and a White House meeting with its leader to try to exert leverage over Ukraine’s president to publicize the investigations, effectively asking a foreign power to help his 2020 re-election campaign.

The pressure campaign resulted in a charge of abuse of power. The House also charged Mr. Trump with obstructing Congress, based on his blanket blockade against testimony by administration officials and refusal to turn over documents requested by the House impeachment investigators.