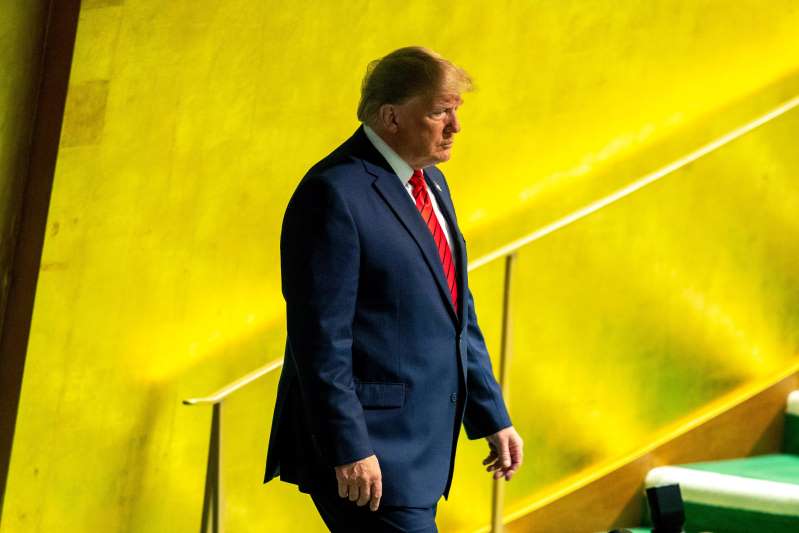 President Donald Trump brushed aside warnings from the United Nations on Wednesday that the 74-year-old organization risks being unable to pay its staff and bills if member nations don’t cough up their annual dues soon.

The biggest delinquent payer in the world? The United States.

Washington owes the U.N. $381 million in back payments and $674 million this year, according to the U.S. mission to the U.N. As the largest contributor to the 193-member organization, the U.S. has long sought to pressure the U.N. to rein in spending.

Trump, who has openly questioned the value of the U.N., has made skepticism of multinational organizations a central component of his foreign policy. Trump has demanded European countries contribute more to NATO and has pressed allies in Asia and the Middle East to rely less on U.S. military might and spend more on their own security.

Trump v. Thunberg: Is the UN moving on from Donald Trump?

Responding to reports of deep U.N. budget deficits, Trump returned to the theme.

“So make all Member Countries pay, not just the United States!” he wrote Wednesday.

U.N. officials say 129 countries have paid their 2019 dues, two-thirds of all members. Stéphane Dujarric, spokesman for U.N. Secretary General Antonio Guterres, said that nearly $2 billion has been paid to the organization this year and that the outstanding balance for other countries amounts to another $1.3 billion.

Dujarric described the financial situation as “the worst cash crisis facing the United Nations in nearly a decade” and said it “runs the risk of depleting its liquidity reserves by the end of the month and defaulting on payments to staff and vendors.”

Created in 1945 on the heels of World War II, the United Nations charter tasked the organization with ending conflict and human rights abuses. Its real power lies in the 15-member Security Council, which can authorize sanctions and military action.

The U.S. has quarreled with the U.N. for decades over funding. A U.S. mission official, speaking on the condition of anonymity to discuss internal decisions, said the U.S. paid $600 million to peacekeeping efforts this year and will pay “the vast majority of what we owe to the regular budget this fall, as we have in past years.”

But the longstanding tension has received renewed attention because of Trump, who once described the U.N. as “not a friend of democracy” and has consistently questioned multinational efforts such as NATO and the annual G-7 and G-20 summits.

Trump spent three days in New York last month for the annual U.N. General Assembly, pressing his case for sovereignty while also seeking support from allies to address a suspected Iranian attack on Saudi Arabia. Despite the international audience, Trump has used his U.N. addresses to speak more to domestic audiences.