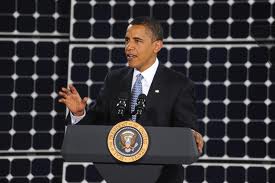 After failing to pass carbon dioxide emissions or so called cap-and-trade in 2010, President Obama on Monday issued new mandates that fossil-burning power plants cut carbon emissions by 30 percent by 2030.

Many have claimed this new mandate circumvents Congress and will cost nearly a quarter of a million jobs, forcing many power plants across the country to shut down.

The last attempt by the president to reduce carbon dioxide emissions was in in 2010, when the Democrats controlled both the House and Senate, but many attribute the loss of the House Representatives to this vote.

This new proposal has sent shock waves across Washington and around the country especially in energy producing states.

EPA Administrator Gina McCarthy stated, “We have a moral obligation to act.”

In his weekly radio address over the weekend President Obama remarked, “right now, there are no national limits to the amount of carbon pollution that existing plants can pump into the air we breathe. None.  We limit the amount of toxic chemicals like mercury, sulfur, and arsenic that power plants put in our air and water.  But they can dump unlimited amounts of carbon pollution into the air.  It’s not smart, it’s not safe, and it doesn’t make sense.”

The White House is selling this proposal by giving the states flexibility by highlighting the fact states can choose from a menu of policy options to reduce emissions.

The New York Times reported on the proposed rule change, “Rather than immediately shutting down coal plants, states would be allowed to reduce emissions by making changes across their electricity systems — by installing new wind and solar generation or energy-efficiency technology, and by starting or joining state and regional ‘cap and trade’ programs, in which states agree to cap carbon pollution and buy and sell permits to pollute,”

The president’s new proposal is not without detractors with the U.S. Chamber of Commerce study released last week estimated the EPA’s climate rule could cost $50 billion annually and about 40 percent of the U.S. coal fleet could be retired by 2030.

The Chamber study also found that shutting down coal plants would mean more natural gas would have to be used to generate power, driving up gas prices and forcing people to pay $17 billion more for electricity per year.

Last week the president said at the Children’s National Medical Center in Washington, D.C. “It’s just time for Washington to catch up with the rest of the country.”

“Now, special interests and their allies in Congress will claim that these guidelines will kill jobs and crush the economy,” Obama said. “Let’s face it, that’s what they always say.”

This new proposal by the president places vulnerable Senate Democrats in a precarious situation with many in the fight for their lives.  Republicans need to flip just six seats and to regain control of Senate and with the House in GOP hands, and full control of both branches of Congress, the president would be stymied legislatively.

One of the vulnerable Senate Democrats Sen. Mary Landrieu of Louisiana, who also chairs the stated, Senate Committee on Energy and Natural Resources, “While it is important to reduce carbon in the atmosphere, this should not be achieved by EPA regulations,” the Democratic senator said in a statement Monday.

“The senator has time and time again opposed the EPA acting alone to reduce carbon emissions,” said the release from the Landrieu-chaired Senate Committee on Energy and Natural Resources.

Vulnerable House Democrat Representative Nick J. Rahall II of West Virginia spoke on the House floor last week, denouncing the proposed new EPA regulations, “The only real question is where on a scale from devastating to a death blow the new rule will fall.”

The real question, what will be the effect on the economy, or will the real pain be felt in the November mid-term elections.