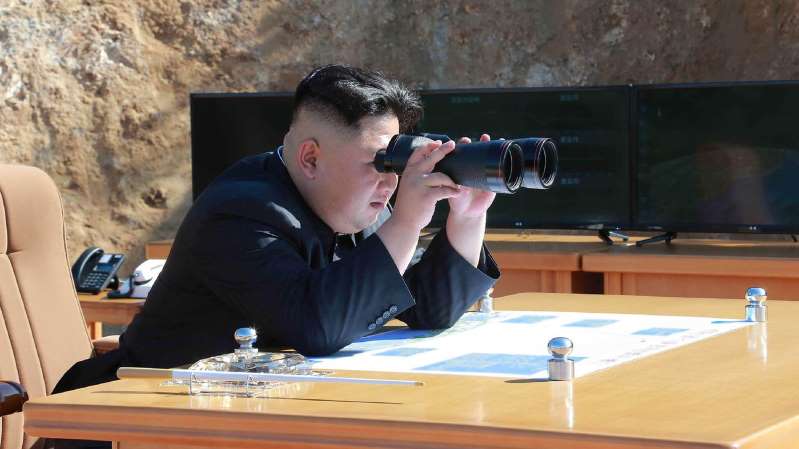 North Korea test-launched another volley of what appeared to be short-range ballistic missiles, in a show of firepower that reminded the U.S. of Kim Jong Un’s threat to walk away from nuclear talks in the new year.

North Korea has fired off at least 20 missiles in a dozen different military tests since breaking a testing-freeze in May, with the operations seen by experts as improving its ability to launch quick strikes through new weapons that can deliver nuclear warheads to all of South Korea and parts of Japan.

Weapons experts said one projectile shown in a photo appeared to be the KN-25 short-range ballistic missile, which the regime has recently fired off from mobile launchers. South Korea said the two projectiles traveled about 90 kilometers (55 miles) into the atmosphere and covered a distance of 370 kilometers, which experts said was similar to previous KN-25 launches.

“Supreme Leader Kim Jong Un expressed satisfaction over it and sent congratulations to the national defense scientists who are devotedly struggling for developing the self-defensive military muscle of the country and bolstering up its armed forces,” the official Korean Central News Agency said Friday. There was no immediate indication that Kim, who has been on hand for most of the tests since May, personally oversaw the latest one.

The latest launch Thursday came about a day after Kim sent a condolence message to South Korean President Moon Jae-in over the death of his mother. North Korea has in recent days reiterated its calls on U.S. President Donald Trump to ease sanctions on the state or risk Pyongyang taking a “new path” that could escalate security tensions.

The Association of Southeast Nations’ annual meetings opened this week in Bangkok and the North Korean regime has sometimes timed weapons tests to coincide with such high-profile summits. The meeting draws leaders from across the region, although Trump isn’t attending this year.

“The North Korean-set year-end deadline is approaching, and Pyongyang will likely continue to keep up the pressure and even escalate tensions by testing more weapons over the next several weeks,” said Rachel Minyoung Lee, a Seoul-based analyst with the NK Pro website.

On Sunday, the North Korean spy chief who delivered a personal message from Kim to Trump at the White House at the start of the year, issued a fresh warning to Washington, saying “there is a limit to everything.”

“The U.S. is now more desperately resorting to the hostile policy towards the DPRK, misjudging the patience and tolerance of the DPRK,” Kim Yong Chol was quoted as saying by KCNA , referring to North Korea by its official name.

After about an eight-month lull in direct nuclear dealings, the U.S. and North Korea held their first direct nuclear negotiations in Stockholm in early October, with the two sides disagreeing about what was on the table and showing how far apart they are.

Trump and Kim Jong Un have little to show for their diplomacy that started with their first summit in Singapore in 2018 and included two other direct meetings. Trump has shrugged off the recent North Korean weapons tests, saying Kim has lived up to his pledge to halt tests of nuclear weapons and intercontinental ballistic missiles.

North Korea’s prior launch of a ballistic missile came Oct. 2, when it fired from an underwater platform a new type of weapon designed to be deployed on a submarine, which had an estimated range of about 1,900 kilometers.

–With assistance from Kanga Kong and Sophie Jackman.

To contact the reporters on this story: Jihye Lee in Seoul at jlee2352@bloomberg.net;Emi Nobuhiro in Tokyo at enobuhiro@bloomberg.net

To contact the editors responsible for this story: Brendan Scott at bscott66@bloomberg.net, Jon Herskovitz