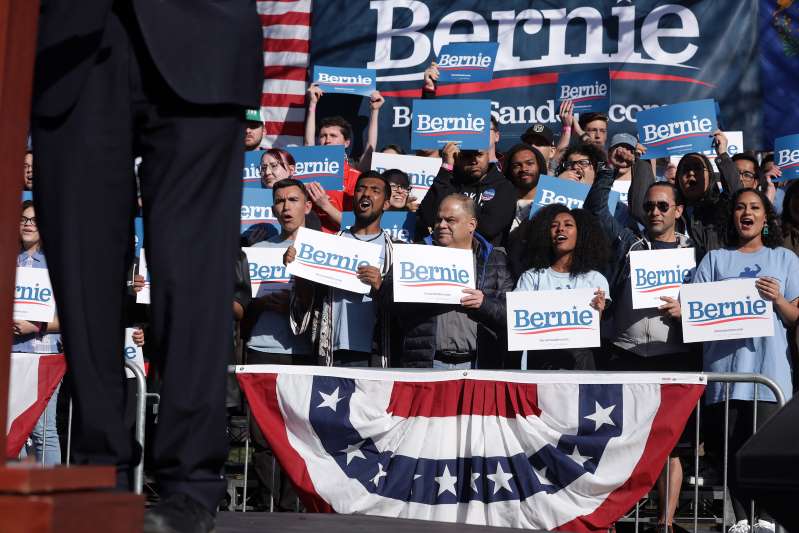 As the Democratic primary battle turns to states with more racial diversity than the first two nominating contests in Iowa and New Hampshire, newly released data from the NBC News/Wall Street Journal poll finds that Vermont Sen. Bernie Sanders now enjoys similar levels of support among black Democratic primary voters as former Vice President Joe Biden does, while all of their other rivals — with the exception of former New York City Mayor Mike Bloomberg — have failed to gain any meaningful traction with this crucial voting bloc.

But the same poll also shows that all black registered voters give President Donald Trump an approval rating of just 14 percent, and they would overwhelmingly chose any of the Democratic candidates over him in a general election.

According to the newly released data, Biden has the support of 31 percent of black Democratic primary voters, while Sanders captures the backing of 29 percent.

The NBC News/WSJ poll used an oversample of black voters to gain greater insight into their views of the 2020 field. Because the margin of error for black Democratic primary voters alone — a sample size of 139 respondents — stands at a high 8.31 percent, it is difficult to differentiate the true levels of support for each of the candidates.

Still, the close margin shows that Sanders has made inroads in a community previously dominated by Biden; aggregated data from 2019 shows that Biden led Sanders among these voters by as much as 30 percentage points in NBC News/WSJ national polls last year.

Bloomberg, who has saturated the TV and radio airwaves with more than $300 million in personal spending over the last 10 weeks, received about half as much support with black primary voters as either Biden or Sanders, while all other Democratic candidates were mired in single digits.

The poll was conducted February 14-18, 2020 — before Bloomberg’s debut on the Democratic debate stage in Las Vegas. During the debate, Bloomberg came under fire from his rivals for his embrace of the policing policy known as stop-and-frisk, which disproportionately targeted people of color for searches during his tenure as New York City mayor.

The poll particularly underscores how former South Bend mayor Pete Buttigieg and Minnesota Sen. Amy Klobuchar, who hoped to use strong performances in the overwhelmingly white Iowa and New Hampshire contests to catapult to frontrunner status, have failed to make significant inroads into the black community.

For both candidates, more black voters overall express reservations or discomfort with their candidacies than enthusiasm or comfort.

For Buttigieg, a combined 28 percent are comfortable or enthusiastic, while 41 percent have reservations or are uncomfortable.

While Massachusetts Sen. Elizabeth Warren appears to garner little support from black voters in the Democratic horserace, more say they’re enthusiastic or comfortable (46 percent) than those expressing discomfort with her (35 percent).

“These are difficult numbers for Pete Buttigieg and Amy Klobuchar as regards their standing in the African-American community,” said Republican pollster Bill McInturff of Public Opinion Strategies, who conducted the poll along with Democratic pollster Peter Hart. “Just weeks away from South Carolina and Super Tuesday, they simply don’t have the standing with what’s 20 percent of Democratic primary voters.”

Some have suggested that Buttigieg, who is gay, may be lagging with minority voters because of more socially conservative views among some older African-Americans. The poll finds that 37 percent of black registered voters say they either have reservations or are uncomfortable with a presidential candidate who is gay or lesbian. That’s compared with 27 percent in the larger sample of all registered voters surveyed in the poll.

Twelve percent of black voters express discomfort with a female candidate. That’s compared with 14 percent of all registered voters who said the same.

And a combined 55 percent of registered black voters say they have reservations or are uncomfortable with a socialist candidate. That’s compared with 67 percent of all voters.

Overall, black voters express far more comfort with Sanders and Biden than with their rivals, although neither candidate has a significant edge when it comes to enthusiasm about their candidacy.

While the poll may show muted enthusiasm for much of the Democratic field among black voters, one candidate elicits particularly strong disapproval: President Donald Trump.

Trump’s approval rating among all black voters stands at just 14 percent, with 84 percent disapproving — including 69 percent who say they disapprove of him strongly.

The president fares slightly better in their ratings of his economic performance, with 23 percent approving and 62 percent disapproving of how he’s handling the economy.

And among all black voters, nearly eight-in-ten say they are very uncomfortable with his candidacy for president in 2020.

In hypothetical head-to-head matchups, overwhelming majorities of these voters also say they would choose the Democratic candidate. Joe Biden leads with them over Trump 89 percent to 8 percent; Sanders leads him 87 percent to 7 percent; and Bloomberg leads him 84 percent to 11 percent.

Klobuchar and Buttigieg fare slightly worse, but would still enjoy about three-quarters of black support in these matchups. Buttigieg leads over Trump 75 percent to 16 percent, and Klobuchar leads 77 percent to 15 percent.