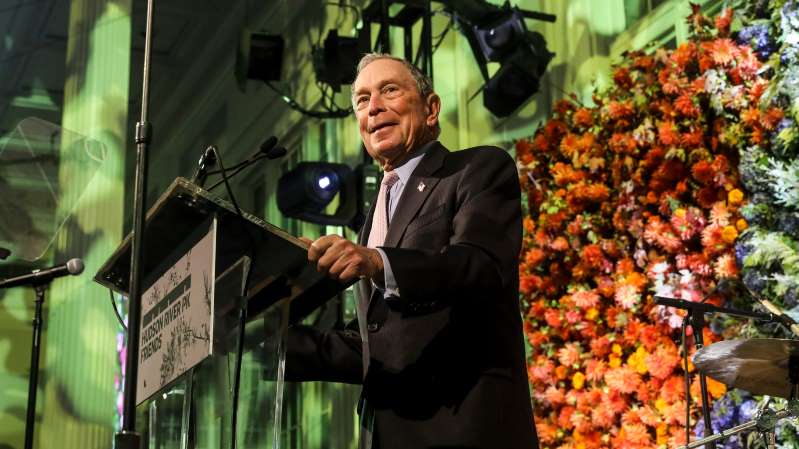 Michael R. Bloomberg is actively preparing to enter the Democratic presidential primary and is expected to file paperwork this week designating himself as a candidate in at least one state with an early filing deadline, people briefed on Mr. Bloomberg’s plans said.

Mr. Bloomberg, the former New York City mayor and billionaire businessman, has been privately weighing a bid for the White House for weeks and has not yet made a final decision on whether to run, an adviser said. But in the first sign that he is seriously moving toward a campaign, Mr. Bloomberg has dispatched staffers to Alabama to gather signatures to qualify for the primary there. Though Alabama does not hold an early primary, it has a Friday deadline for candidates to formally enter the race.

Mr. Bloomberg and his advisers called a number of prominent Democrats on Thursday to tell them he was seriously considering the race, including former Senator Harry Reid of Nevada, the retired majority leader who remains a dominant power broker in the early caucus state. Aides to Mr. Bloomberg also reached out to Gov. Gina Raimondo of Rhode Island, the chair of the Democratic Governors Association.

Mr. Reid said in a brief interview that Mr. Bloomberg had not explicitly said he was running for president but that the implication of the call had been clear.

“It wasn’t just to wish me a good weekend,” Mr. Reid said.

Mr. Bloomberg has prepared to enter presidential races before, in 2016 and then earlier this year, only to pull back in the end. Yet in those flirtations with the presidency, Mr. Bloomberg has never taken the step of filing to put his name on a state ballot.

Should Mr. Bloomberg proceed with a campaign, it could cause a seismic disruption in the Democratic race. With his immense personal wealth, centrist views and close ties to the political establishment, he would present an instantaneous threat to former Vice President Joseph R. Biden Jr., who has been struggling to raise money and is already defending his ideologically moderate base on multiple fronts.

Mr. Bloomberg, 77, initially bowed out of the 2020 race because of Mr. Biden’s apparent strength, but he has since grown skeptical that Mr. Biden is on track to win the Democratic nomination and he does not see the two leading liberals in the race, Senators Elizabeth Warren of Massachusetts and Bernie Sanders of Vermont, as strong candidates for the general election.

But Mr. Bloomberg would face a difficult path in a Democratic primary largely defined so far by debates about economic inequality. His presence in the race would offer fodder to the party’s rising populist wing, led by Ms. Warren and Mr. Sanders, who contend that the extremely rich already wield far too much influence in politics. He is a former Republican who registered as a Democrat ahead of the midterm elections last year. And his mayoral record, including his support for stop-and-frisk policing and his championing of charter schools, has the potential to alienate pillars of the Democratic Party’s political base.

Ms. Warren, who has sparred from afar with Mr. Bloomberg over her proposals to tax the extremely rich, issued a blistering fund-raising message calling his potential candidacy “another example of the wealthy wanting our government and economy to only work for themselves.” Campaigning in North Carolina on Thursday evening, Ms. Warren offered a restrained comment on Mr. Bloomberg and cast her candidacy as a “grass roots movement.”

“It’s not enough just to have somebody come in, anybody, and say they’re going to buy this election,” she said.

Howard Wolfson, a close adviser to Mr. Bloomberg, said on Thursday that the former mayor has grown uneasy about the existing trajectory of the Democratic primary. He said Mr. Bloomberg viewed President Trump as an “unprecedented threat to our nation,” and noted the Democrat’s heavy spending in the 2018 midterm elections and this week’s off-year races in Virginia.

“We now need to finish the job and ensure that Trump is defeated — but Mike is increasingly concerned that the current field of candidates is not well positioned to do that,” Mr. Wolfson said. “If Mike runs he would offer a new choice to Democrats built on a unique record running America’s biggest city, building a business from scratch and taking on some of America’s toughest challenges as a high-impact philanthropist.”

Advisers to Mr. Bloomberg said he would likely make up his mind about the race within days, rather than weeks.

He will have to move quickly if he is to compete in a serious way for the Democratic nomination. Beyond Alabama, several other states have filing deadlines in quick succession, including Arkansas and New Hampshire, with its crucial early primary, next week.

Bloomberg petitioners were on the campus of the University of Alabama on Thursday, a Democratic strategist said, and officials with the Arkansas Democratic Party said they had been contacted by a Washington, D.C., law firm on Thursday to seek detailed information about the state’s filing procedures. The firm had not named Mr. Bloomberg as its client, stirring speculation in the state party that the surprise candidate might be Hillary Clinton.

Michael John Gray, the chairman of the Arkansas Democratic Party, said Mr. Bloomberg’s financial might would make him an important wild card in the race.

“It shakes things up, obviously,” Mr. Gray said of a potential Bloomberg campaign.

A Fox News poll found in late October that Mr. Bloomberg would face more opposition than enthusiasm at the outset of a primary campaign: Presented with Mr. Bloomberg as a hypothetical entrant into the primary, 6 percent of Democratic primary voters said they would definitely support him, while 32 percent said they would never vote for him.

While some of Mr. Bloomberg’s longtime advisers have committed to a campaign, including the pollster Doug Schoen and the ad-maker Bill Knapp, he would have to build a campaign from zero in the early primary and caucus states, and he may have a hard time qualifying for either of the two remaining debates this year.

In a Democratic race, Mr. Bloomberg would face a battery of complicated questions about his political ideology and governing record. He has been a vigorous advocate for core liberal causes, like gun control and battling climate change. But as mayor Mr. Bloomberg also championed police searches that targeted black and Latino men, and in an interview last fall, he defended his administration’s stop-and-frisk policing strategy.

In the same interview, Mr. Bloomberg also expressed skepticism about the #MeToo movement in general, as well as the specific allegations of sexual misconduct against Charlie Rose, the disgraced anchor who for many years broadcast his show from the offices of Mr. Bloomberg’s media company.

Mayor Steve Benjamin of Columbia, S.C., said in an interview that he spoke with Mr. Bloomberg in late October, and the two discussed the unfolding presidential race. Mr. Benjamin, a Democrat who has not taken sides in the primary, predicted Mr. Bloomberg’s background as a businessman and mayor, and his stances on climate and guns, would make him a formidable contender if he runs.

“There’s a lot of work to be done in gearing up for the first four primaries and caucuses, and certainly for Super Tuesday, but I would caution anybody not to underestimate Mike Bloomberg,” Mr. Benjamin said.

Ms. Raimondo, the Rhode Island governor, stopped short of backing Mr. Bloomberg as a presidential candidate but issued a glowing statement about his record.

“While this is not an endorsement, Michael Bloomberg is a friend and I admire his track record as a successful business leader and mayor who finds practical solutions to some of America’s biggest challenges, from creating good jobs to addressing the opioid crisis and fighting for common-sense gun safety,” Ms. Raimondo said.

But several likely Iowa caucusgoers, in interviews on Thursday night at an event for another candidate, Senator Amy Klobuchar of Minnesota, expressed a lack of enthusiasm for a potential Bloomberg candidacy.

“This is a rigorous thing, to run for political office,” said Janny Miller, 65, of Des Moines. “For somebody to step in late — while he probably has a lot to offer — maybe it’s not the right thing to do.”

Even if Mr. Bloomberg enters the race almost immediately, it would likely be impossible for him to qualify for the next debate on Nov. 20. The deadline is just six days away, and he would need 165,000 unique donors and four polls showing him at 3 percent or higher (or two early-state polls at 5 percent). There may not even be four qualifying polls released in the next six days, and those that will be released may already be underway without Mr. Bloomberg’s name.

For the December debate, he would need 200,000 unique donors and four polls showing him at 4 percent or higher, or two early-state polls at 6 percent. The deadline for meeting that threshold is Dec. 12.

Though Mr. Bloomberg could still opt against running, even his preliminary steps toward a campaign may come as a blow to Mr. Biden, who has been counting on strong support from centrist Democrats, traditional party donors and much of the business community to carry him forward in the race.

When Mr. Bloomberg previously announced in March that he would not run for president, advisers indicated the decision was shaped in part by Mr. Biden’s strong popularity with Democratic primary voters. But Mr. Biden’s position in the race is evidently no longer imposing enough to keep Mr. Bloomberg at bay.

As of late afternoon on Thursday, Mr. Bloomberg had not spoken with Mr. Biden about his updated plans, an adviser to Mr. Bloomberg said.