Skip to content
Home » Foreign Policy » Maduro Sounds Conciliatory but Warns: U.S. Intervention Would Be Worse Than Vietnam
Previous Next

Maduro Sounds Conciliatory but Warns: U.S. Intervention Would Be Worse Than Vietnam 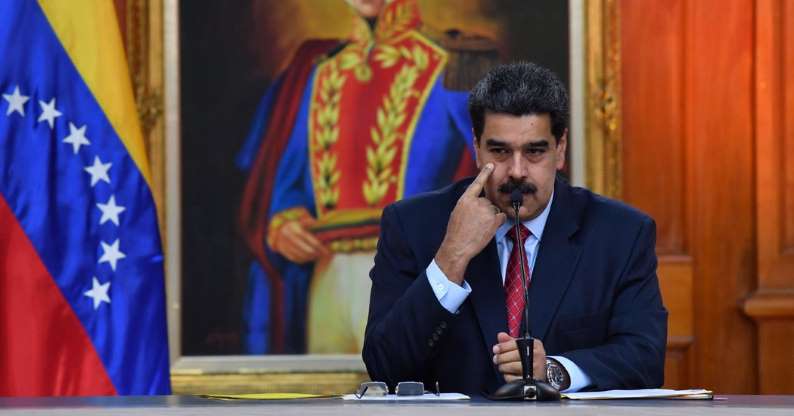 President Nicolás Maduro of Venezuela warned Americans in a video posted on Wednesday that intervening in his country “would lead to a Vietnam worse than they can imagine.”

The video, posted on his social media accounts, came out on the same day Mr. Maduro gave an interview to Russia’s RIA news agency in which he seemed more conciliatory, saying he was open to talks with the country’s opposition but rejecting calls for a new election.

“I am ready to sit down at the negotiating table with the opposition,” Mr. Maduro said, naming Mexico, Uruguay, Bolivia and Russia among possible mediators, but giving no indication of having made progress in arranging the talks.

The United States last week recognized Venezuela’s opposition leader, Juan Guaidó, as the country’s acting president, as have 26 other countries.

Many thousands of Venezuelans poured into the streets last week and again this week in anti-government protests called by Mr. Guaidó. Mismanagement and corruption under Mr. Maduro has plunged Venezuela, an oil-rich country that was once the wealthiest in Latin America, into a humanitarian crisis. Many of its citizens are going hungry and sick, and more than three million have fled abroad.

As part of a push to oust Mr. Maduro, the Trump administration has imposed sanctions that cut off his government’s access to the revenue from oil sales in the United States, one of Venezuela’s main sources of cash, and seeks to make it available to Mr. Guaidó instead.

A presidential election last year returned Mr. Maduro to office for a second six-year term, but it was marred by widespread reports of fraud and coercion. Several European Union countries have called for new elections — a prospect even the opposition says will take some time — and have warned that they will recognize the opposition leader if Mr. Maduro does not schedule a new vote.

China and Russia have continued to support Mr. Maduro, as have Cuba and Bolivia.

President Trump seized on Mr. Maduro’s offer for talks with the opposition by suggesting on Twitter that the Venezuelan leader had acted in response to American sanctions.

Maduro willing to negotiate with opposition in Venezuela following U.S. sanctions and the cutting off of oil revenues. Guaido is being targeted by Venezuelan Supreme Court. Massive protest expected today. Americans should not travel to Venezuela until further notice.

Mr. Guaidó said on Twitter that Mr. Trump had telephoned him to reiterate American support and pledge humanitarian help. He said the opposition was focused on large-scale demonstrations scheduled for Saturday.

Mr. Guaidó also took part in protests on Wednesday at the Central University of Venezuela in Caracas, where he was swarmed by international reporters. Wearing a white lab coat, he linked arms with medical students and marched with them up a roadway, before speeding off on the back of a motorbike.

The demonstration was one of a handful in the city on Wednesday, though on a smaller scale than some recent demonstrations. Some workers walked out of their jobs for hours in protest against Mr. Maduro and his government, gathering on corners through the capital.

“We protest because we are going through a lot of need,” said Darío Rodríguez, 50, a construction worker demonstrating in the Las Mercedes neighborhood. “Insecurity, money, food — my salary is not even enough to buy salt.”

The government has tried to impede reporters covering the protests. On Tuesday, security forces detained a number of journalists covering demonstrations outside the presidential palace in Caracas.

In his RIA interview, Mr. Maduro rebuffed calls for a new presidential election, saying that “if the imperialists want new elections, let them wait until 2025.”

Mr. Maduro also dismissed the possibility of military intervention by the United States to remove him from power, a prospect raised by John R. Bolton, the national security adviser. He called Mr. Bolton “infantile” and “clowning” for speaking to reporters while holding a notepad with the phrase “5,000 troops to Colombia” written on top.

“Let’s not allow a Vietnam in Latin America,” Mr. Maduro said in the video. “If the United States intends to intervene here, they will have a Vietnam worse than what they can imagine. Let’s not allow violence.”

In an Opinion article published Wednesday in The New York Times, Mr. Guaidó wrote that the opposition’s effort to oust Mr. Maduro would require “support from key military contingents.”

“We have had clandestine meetings with members of the armed forces and the security forces,” he wrote. “We have offered amnesty to all those who are found not guilty of crimes against humanity.”

The opposition has been meeting with midlevel officers to discuss amnesty for defectors, a prominent opposition member told The Times last week.

Mr. Guaidó also called for international backing while he takes steps to set up a functioning government.

“I have appealed to António Guterres, the United Nations secretary general, as well as to several humanitarian agencies, for support in easing the humanitarian crisis,” he wrote.

Mr. Guaidó’s envoy to the United States, Carlos Vecchio, said in Washington on Wednesday that he was starting the complex process of securing Venezuelan government assets held in bank accounts in the United States. He said he was meeting with White House and Treasury officials this week.

Speaking at a news conference, Mr. Vecchio said the country needs to have a “fair and transparent election,” but that could take some time. “It’s not just a matter of days.”

Elliott Abrams, the new United States special envoy for Venezuela, told reporters that American officials and Mr. Guaidó were looking around the globe for assets belonging to the Venezuelan government. Where possible, he said, the United States will ask countries to freeze the assets to keep Mr. Maduro’s government from accessing them, he said.