Skip to content
Home » U.S. Politics » Lawmakers say they have reached an ‘agreement in principle’ to avoid government shutdown
Previous Next 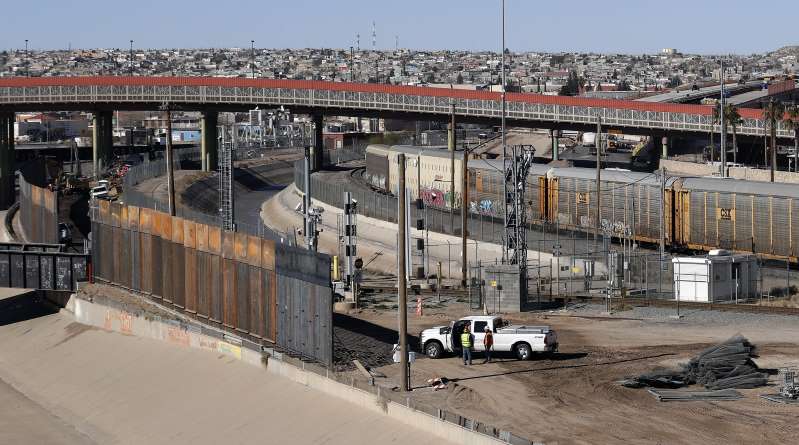 Key lawmakers said late Monday they had reached a tentative agreement over immigration rules and funding for border barriers, a deal that if signed by President Trump would avert another government shutdown set to start at week’s end.

White House officials did not have an immediate comment on the preliminary deal, which would fall far short of Trump’s demands for funding to build more than 200 miles of wall along the U.S.-Mexico border. And while congressional negotiators said they were hopeful Trump would sign off on the deal, they said they had not been given assurances.

The breakthrough in Congress came after a slog of meetings between top negotiators in the House and Senate. The deal is still being vetted with their colleagues, but top lawmakers expressed optimism they had resolved major differences.

“The fact that it looked like there was going to be another shutdown imminently” brought renewed efforts on Monday, Senate Appropriations Committee Chairman Richard C. Shelby (R-Ala.) told reporters after announcing the deal.

Asked if the White House would support the agreement, Shelby said, “We think so. We hope so.”

The framework would provide $1.375 billion for barriers along the border, including 55 miles of new fencing, with certain restrictions on the location, according to a congressional official familiar with the agreement. The official spoke on the condition of anonymity because the agreement had not been made public.

Democrats backed down from their demand for tight limits on the number of detention beds Immigrations and Customs Enforcement could use to detain undocumented immigrants, pulling away from a push that led to a breakdown in talks over the weekend.

Negotiators felt the deal would prove sufficient to fund all government operations through the end of the September, potentially removing any more shutdown threats for the remainder of the fiscal year.

House Appropriations Committee Chairman Nita M. Lowey (D-Calif.), who was in Monday’s meetings, said she hoped the negotiators would have a finished product by Wednesday. She said she ran the proposal by House Speaker Nancy Pelosi (D-Calif.) and she signed off on it.

“Some may be happy, some may not be happy,” said Lowey, assessing how Democrats would receive the deal and saying she hoped the agreement would have the votes needed to pass the House. “We did the best we could.”

Asked why she thought the dispute over the detention beds flared up over the weekend, Lowey paused before saying, “You’ll have to ask those who were debating it and arguing it. It’s one part of the bill. And the issue, in some communities across the country, has really become very volatile and personal to many of the members.”

The White House and congressional leaders have struggled for months to reach an agreement on a government funding bill because of major differences between Democrats and Republicans over immigration policy. Trump called for using $5.7 billion in taxpayer money to construct more than 200 miles of wall along the U.S.-Mexico border. Democrats objected to this, and Trump forced a partial government shutdown that began Dec. 22 to try to exert pressure on Congress to act. The shutdown dragged on for 35 days.

The White House and Republicans eventually backed down, agreeing last month to a short-term spending bill for a number of agencies that was meant to give congressional negotiators more time to reach a longer-term deal.

Negotiators had made steady progress but ran into trouble over the weekend. The White House had largely signaled to Republicans that it would soften its demand for $5.7 billion in wall money, convinced it could use other legal maneuvers to redirect existing funds. Instead, discussions bogged down over disagreements about how many undocumented immigrants could be detained at once. Republicans wanted flexibility in detention rules, arguing they needed to be able to adjust to account for violent criminals and others. Democrats countered that the changes Republicans sought would give the White House almost limitless powers to detain as many people as they wanted.

The unexpected dispute imperiled talks, spooking negotiators as they worried they were running out of time. Democrats signaled earlier in the day that they were more interested in cutting a deal than digging in as the Friday deadline neared, and they largely backed down by late Monday.

The discussions are the first major political test for Democrats and Republicans after the last government shutdown froze the paychecks of 800,000 federal workers.

Trump attempted Monday to put the onus on Democrats to broker a deal. Asked by reporters if the government would shut down again Saturday, he responded, “That’s up to the Democrats.”

Republicans went on the attack Monday over Democrats’ demands, which Senate MWith ajority Leader Mitch McConnell (R-Ky.) called an “absurd last-minute poison pill” and “a get-out-of-jail-free card for criminals because the radical left doesn’t like U.S. Immigration and Customs Enforcement.”

“This provision would rightly be a total nonstarter for the White House,” McConnell said on the Senate floor.

But Democrats have said the Republican descriptions inaccurately characterize their position. They said the White House’s insistence on excluding people charged or convicted of crimes, even nonviolent drug offenses, would give the White House almost limitless power to detain people and make existing rules irrelevant.

Trump has readied a plan to declare a national emergency on the southern border, which he believes will allow him to redirect taxpayer money from other projects to build parts of a wall — without approval from Congress.

The Monday meetings came at a pivotal time. Trump traveled to El Paso for a rally Monday evening, and he is expected to restate his case for tougher immigration rules. Republicans in Congress have tried to avoid Trump’s hard-line rhetoric during negotiations, but his support is crucial for a final deal.

The president on Monday attacked Democrats on Twitter, alleging Democrats are trying to create new protections for undocumented immigrants with criminal records.

Unlike in the fight over billions in funding for a border wall, which a majority of Americans oppose, Republicans say they are on strong political ground if the debate becomes centered on whether ICE has free rein to detain convicted or suspected criminals.

“The wall is unpopular. Enforcing the law is popular,” said Michael Steel, a GOP strategist and former top House aide. “This is particularly difficult terrain for Democrats to fight on. I think that most people want the laws enforced, and they expect that if illegal immigrants break the law, that they will be detained.”

A partial shutdown could have a broad impact on the country. Funding lapses would go beyond DHS to hit a number of other federal departments, including the Housing and Urban Development, Treasury, Agriculture and Interior departments, the Environmental Protection Agency, and the Internal Revenue Service.

During the last government shutdown, 800,000 federal employees went without pay.

At the beginning of talks, lawmakers looked for ways to avoid conflict over Trump’s demand that $5.7 billion in taxpayer money be used to build parts of a wall along the border with Mexico. Lawmakers were discussing sums between $1.3 billion and $2 billion, far short of Trump’s initial demands.

The White House recently signaled to Republicans that it could accept smaller sums, because it believed it could legally take money from other accounts to build the wall. Moving money from one account to another could be challenged in court, but top White House officials have said they are prepared for legal challenges.

With lawmakers planning to continuing negotiating into the evening, they were cognizant that they didn’t have much time left to broker a deal.

“I wish we could have concluded it and I’d walk and say ‘Hallelujah,’ but we’re still having discussions,” Lowey said.