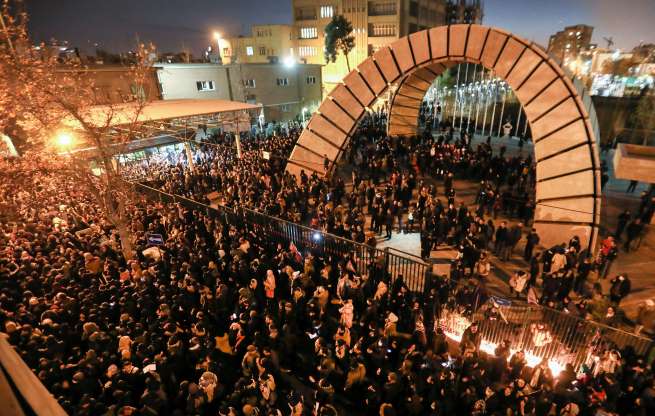 President Trump had from his earliest days in office raised the possibility of killing Maj. Gen. Qasem Soleimani, the powerful Iranian military commander who died this month in a U.S. military drone strike.

As a presidential candidate in 2015, Trump in an interview didn’t seem to have heard of Soleimani or the paramilitary Iranian Quds Force he led. But within five months of taking office, Trump was raising the possibility of killing him — an idea he would bring up several times again in the months and years to follow.

The president’s decision to act now was a response to increased Iranian aggression in the Middle East and an “imminent threat” that the administration has struggled to consistently describe. But the attack also reflects Trump’s growing comfort in his job and the presence of a new group of top national security advisers who are more hawkish on Iran, more willing to provide him with aggressive options and less inclined to check his instincts.

Trump initially floated the possibility of killing Soleimani in the spring of 2017 when Iranian-backed rebels in Yemen fired a ballistic missile at Saudi Arabia’s capital just before Trump’s arrival, according to one current and one former U.S. official. But then-Defense Secretary Jim Mattis resisted any action.

“It’s an idea that’s been batted around for a while,” said a former senior Pentagon official who, like others, spoke on the condition of anonymity to discuss internal deliberations. “It’s not a hard or particularly complicated idea to come up with.”

Former White House officials who supported the killing of Soleimani this month viewed Mattis’s absence as one of the reasons the strike proceeded, surmising that Mattis either wouldn’t have supported such a strike or wouldn’t have presented the option to the president. Mattis declined to comment on the strike or advice he would have provided.

His caution was often backed up by the then-chairman of the Joint Chiefs of Staff, Gen. Joseph F. Dunford Jr., and then-White House chief of staff John F. Kelly, according to former administration officials. The trio for decades served together in the Marines and were focused on the possible ramifications of escalation in the Middle East.

Despite his reputation as an Iran hawk, Mattis prioritized defeating the Islamic State. More broadly, he was focused on preparing the military for possible conflicts with great powers, such as China and Russia, during his time in the top civilian post at the Pentagon.

The diminished threat posed by the Islamic State in Iraq and Syria has given Trump’s national security team license to shift its focus more toward Iran. Gen. Joseph L. Votel, who retired at Central Command, had been a chief architect of the Trump administration’s plan to destroy the Islamic State and a staunch advocate of keeping U.S. troops in northern Syria to support Kurdish forces and ensure the remnants of the Islamic State did not return.

Last year, Trump withdrew some of those troops, and he has declared the Islamic State defeated.

Votel’s successor, Marine Gen. Kenneth F. McKenzie Jr., has made Iran the top focus for his command. “There’s been a change in circumstances, priorities and personality from Votel to McKenzie,” said the former senior Pentagon official.

Another shift taking place was in the role of the president’s top military adviser. Army Gen. Mark A. Milley has taken over as chairman of the Joint Chiefs of Staff for Dunford, who carved out a conservative role and was deliberately measured when publicly defending administration policy.

Milley, who is more comfortable in the spotlight, has been a vocal defender of the president’s decision to strike Soleimani, saying those on the president’s national security team who saw the intelligence about future attacks “would have been culpably negligent to the American people had we not made the decision we made.”

Esper initially faced questions about whether he was taking a back seat to Secretary of State Mike Pompeo in the administration’s public response to the attack on Soleimani. But in the days since, the former Army officer and defense industry lobbyist has become an increasingly vocal surrogate for Trump, appearing on television multiple times and giving remarks to the press at the Pentagon.

In his appearances, Esper has walked a fine line, defending the president’s decision to kill Soleimani while also rolling back or clarifying some of Trump’s more questionable statements.

After Trump threatened to attack Iranian cultural sites in a message on Twitter, Esper said the U.S. military would follow the laws of armed conflict, which would prohibit such an attack.

Trump’s confidence is further bolstered by three years of White House experience and a feeling that the expert predictions of dire consequences, especially in the Middle East, don’t always come true. Top officials warned Trump that moving the U.S. Embassy from Tel Aviv to Jerusalem would lead to increased attacks on U.S. troops throughout the Middle East, but the attacks never came.

The decision to kill Soleimani at the Baghdad airport on Jan. 3, came in response to an attack by an Iranian-backed militia in Iraq that killed an American contractor and a subsequent siege of the U.S. Embassy. It was another instance where “a lot of folks were advising him not to do it” and Trump believed the consequences weren’t nearly as bad as predicted, said a former White House official.

Trump is also surrounded by a group of advisers who appear more unified, especially in their view of Iran. The result is “less introspection, less debate and faster action,” said a second former senior Pentagon official. “It’s a smaller team, more like-minded, capable of coming to agreement quicker.”

The longest-serving and most influential member of the group is Pompeo, who long has pushed for a more hawkish posture toward Iran.

Esper closely coordinates with Pompeo, his former West Point classmate, and regularly talks to the president but came into the job with more of a defense industry background and “without his own agenda,” a senior Defense official said.

The Soleimani strike reflected Trump’s preference for quick strikes designed to dissuade adversaries over longer and costlier deployments, such as the U.S. troop presence in Syria.

National security adviser Robert C. O’Brien also operates differently from his predecessor, John Bolton, who regularly injected his own policy views into the decision-making process and rankled Cabinet members by keeping them out of the loop, according to one former National Security Council official.

O’Brien, officials said, sees his role as coordinator and facilitator. A former California lawyer and hostage negotiator, he has not gotten into arguments with Trump as Bolton and former national security adviser H.R. McMaster did. Trump regularly complained McMaster talked down to him or tried to convince him he was wrong.

Acting White House chief of staff Mick Mulvaney similarly has shied away from clashing with or trying to constrain the president’s impulses, particularly on national security decisions, where Mulvaney, a lawyer and former congressman, has limited experience.

Kelly, his predecessor, regularly told military officials that he wanted to talk to Trump before they actually carried out one of his orders and sometimes told them to hold off. For example, when Trump ordered the United States to leave NATO, or U.S. troops to leave the Middle East in late 2017, senior intelligence and military officials were brought in to change his mind.

“He’d get spun up, and if you bought some time, you could get him calmed down, and then explain to him what his decision might do,” said a former senior administration official.

When Trump decided to pull U.S. troops out of Syria last year, aides did not attempt to block a statement that he had generated, officials said. Instead, it was circulated for others “to be aware,” in the words of the senior administration official. Previously, Kelly and other aides, including then-press secretary Sarah Sanders, had blocked such statements.

Those who support a hawkish Iran policy have cheered the new group of advisers around the president along with Trump’s more aggressive posture toward Tehran. Democratic lawmakers, however, have expressed fear that the president could inadvertently stumble into a larger war with Iran.

“The revolving door in the national security cabinet is a real danger. There is no consistency of communication with any of our allies,” said Sen. Chris Murphy (D-Conn.) in an interview.

“For all of Mattis’s reputation as an Iran hawk, he ended up being one of the most sober-minded people in the Cabinet,” Murphy said, noting that few people on Trump’s current national security team “have any real diplomatic experience.”