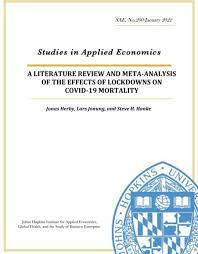 Early this month a controversial study from Johns Hopkins University’s Institute for Applied Economics detailed a report which reviewed extensive data that showed lockdowns do not work, instead impose a heavy cost on the economic, social, educational, and psychological costs which far outweigh any health benefits they might bring.

As the Coronavirus began to impact the world and especially the United States, pandemic, epidemiological modelers predicted catastrophic casualties and the only way to prevent the deaths of Americans and its impact on medical institutions would be to impose extreme lockdowns.  Lockdowns began on March 2020!

Since then we have learned that little evidence existed to support such extreme actions, and the various modeling studies were fatally flawed.

The esteemed Johns Hopkins University’s Institute for Applied Economics put forth a literature review and meta-analysis, that was authored by Professors Jonas Herby, Lars Jonung, and Steve Hanke, finds that lockdowns—“defined as the imposition of at least one compulsory, non-pharmaceutical intervention (NPI)” such as school and business closures and limitations on movement and travel—“had little to no effect on Covid-19 mortality.”

The authors only looked at data and not the political implications of lockdowns imposed by political leaders at the state of federal levels.

The various authors reviewed and analyzed thousands of studies and then gathered together 34 which had reliable and sufficiently relevant information to review. The authors then found that the results were mixed: with several studies finding no statistically significant effect of lockdowns on mortality; the authors then found other studies which found a significant negative relationship between lockdowns and mortality; and others found a significant positive relationship between lockdowns and mortality—i.e., that lockdowns actually increased deaths from Covid-19.

When the various authors of the John Hopkins University review performed what is called a meta-analysis—a statistical technique that combines the results of multiple studies addressing the same question and uses the pooled data to draw conclusions—they found that the coronavirus imposed lockdowns failed to show a large significant effect on Covid-19 mortality: “the effect was little to none.”

The John Hopkins Hopkins review also parlayed and reaffirmed the same conclusions found in an April 2021 review by Canadian economist Douglas Allen that lockdowns had little or no impact on the number of Covid-19 deaths. In Allen’s studies he focused his analysis between voluntary and mandated lockdown effects and concluded that voluntary changes in behavior explained most of the changes in cases and deaths.

This was also the same conclusion that Danish economist Jonas Herby who also is coauthored the Hopkins study, wrote in a January 2021 review concluding that voluntary behavioral changes were ten times as important as mandatory measures in limiting the growth of the pandemic.

This same sediment was reviewed 20 years ago, by economist Tomas Philipson who described how individuals change their behavior in response to infectious-disease outbreaks: they will take their own precautions by voluntarily acting to avoid unnecessary health risks and costs instead of the response to public-health mandates such as the sever pandemic lockdowns that were implemented by government to control the spread of disease.

City Journal reported that various economists predicted that individual actions and compliance with government measures responded to the degree of perceived risk at the moment. As Covid-19 prevalence rose, people stayed home and avoided large groups and indoor activities. As prevalence fell, people resumed normal activities. Even if lockdown measures are effective in the short run, changes in risky voluntary behaviors and compliance with public-health measures in response to that success may counteract the lockdowns’ benefits.

The various epidemiological models relied on by federal and state elected officials during the pandemic—particularly the highly regarded and influential Imperial College of London model—did not account for these voluntary effects. One widely cited Imperial College paper from June 2020 that attributed decreased European Covid-19 deaths entirely to lockdowns acknowledged as much. “We do not account for changes in behavior,” the researchers wrote—changes, they conceded, that would lower deaths “even in the absence of government interventions.”

The Hopkins authors of the review speculated the forced lockdown measures to curtail the spread of the coronavirus may have worsened the pandemic by forcing people to shelter in their homes where they were more likely to become infected or infect family members than if they had been allowed access to safer places like outdoor venues or workplaces that were instituting safety protocols. This is consistent with work from University of Chicago economist Casey Mulligan, who found that private companies voluntarily implemented infection-prevention measures that lowered workplace Covid-19 transmission to levels below household rates.

The review showed that imposed pandemic lockdowns had little to no public health benefits; which imposed massive economic and social costs. Job losses that began in in March and continued into April 2020 exceeded over 22 million and the country still hasn’t fully recovered all the jobs lost.  American children have lost years of educational and social development that will undoubtedly affect them for the rest of their lives. Various studies have shown the serious psychological problems which have soared throughout society. The Hopkins’ researchers’ issued its conclusion that lockdowns “should be rejected as a pandemic policy instrument.”

The question is why hasn’t the media fully covered this review, since its release none of the main stream media has even reported on this research; why?