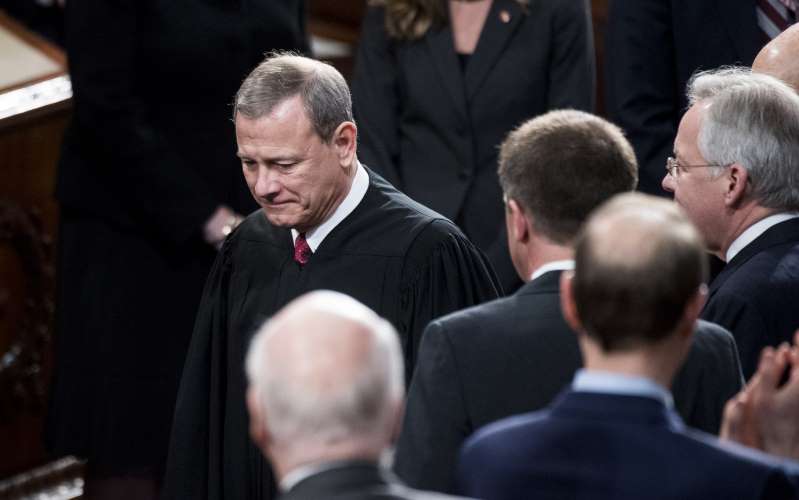 The Constitution requires that when a president is put on trial for impeachment, “the Chief Justice shall preside.” Roberts will be the third to assume that responsibility after Salmon P. Chase presided over the Senate trial of Andrew Johnson in 1868 and William Rehnquist oversaw the trial of Bill Clinton in 1999.

It won’t take Roberts more than a few minutes to get to the U.S. Capitol, directly across the street from the Supreme Court, leaving the court that he seeks to run in a nonpartisan manner and entering the highly charged political atmosphere of the Senate. But the televised image of him seated in the presiding officer’s chair will be a misleading one: He’ll actually have little control over what goes on.

Roberts’ role will be more master of ceremonies than trial judge.

“He has no ultimate authority over much of anything,” said Frank Bowman, an expert on impeachment at the University of Missouri School of Law.

Longstanding Senate rules say Roberts, as the presiding officer, may rule on key issues about evidence, including “questions of relevancy, materiality, and redundancy.” But whatever he concludes can immediately be overturned by a simple majority vote.

Senate Majority Leader Mitch McConnell, R-Ky., has stressed that Roberts is unlikely to issue any substantive decisions on his own. “I would anticipate the chief justice would not actually make any rulings,” McConnell said. “He would simply submit a motion to the body and we would vote.”

For that reason, senators are not merely trial jurors who decide the facts. They also decide legal issues, such as what evidence can be admitted, which is typically the job of a trial judge.

Roberts will have some responsibilities. He will call the Senate to order and decide when to adjourn. And he will read aloud any written questions submitted by senators, who will not be allowed to speak while the trial is underway. But he will defer repeatedly to the Senate parliamentarian on what the rules require.

Bowman said the House prosecutors may try to push Roberts to rule on the admissibility of evidence. “If he’s forced to decide, I think he would make an honest effort to apply normal rules of judicial relevance,” Bowman said. “But I imagine he’ll try to avoid being put in that situation.”

In addition, Roberts might be able to cast tie-breaking votes — a role that’s typically played by the vice president, who can act as the presiding officer during regular Senate proceedings. The rules do not explicitly give the chief justice that authority, but Chase broke two ties when he presided over Johnson’s impeachment trial, so there is some precedent.

Roberts’ job will likely be more complicated than the one Rehnquist faced. Before Clinton’s trial began, the Senate’s majority and minority leaders — Republican Trent Lott of Mississippi and Democrat Tom Daschle of South Dakota — worked out the rules together, sticking closely to those adopted for Johnson’s trial. No such spirit of bipartisanship has guided preparation for President Donald Trump’s trial.

Republican and Democratic leaders have been at an impasse over calling witnesses. Many Republican senators have said they would prefer a quick trial, and McConnell has said he has enough votes to proceed without first calling witnesses — a process that he says would be akin to what happened in Clinton’s trial.

The disagreement prompted House Speaker Nancy Pelosi, D-Calif., to delay sending the articles of impeachment to the Senate, preventing it from beginning a trial. But pressure has been building from within her own party as well as from Republicans to transmit the articles, and Pelosi said Friday that she could submit them as soon as this week after consulting with her caucus on Tuesday.

For many Americans, the impeachment trial will provide their first look at Roberts, who tends to avoid the limelight and is seldom seen in action, except at presidential inaugurations, when he administers the oath of office. Roberts, who turns 65 on Jan. 27, was nominated to be chief justice in 2005 by President George W. Bush to succeed Rehnquist, for whom he once served as a law clerk.

Roberts famously told senators at his confirmation hearing that as a justice, he’d strive to be a neutral umpire. “I will remember that it’s my job to call balls and strikes, not to pitch or bat,” he said.

He became the youngest chief justice in more than 200 years and soon upset many conservatives by writing the decision that saved President Barack Obama’s Affordable Care Act. But after Obama criticized a Supreme Court decision during a State of the Union speech as the justices sat nearby, Roberts wondered why they even bothered to attend.

“To the extent the State of the Union has generated into a political pep rally, I’m not sure why we’re there,” he said.

Roberts clashed with Trump, too, after the president tweeted criticism of what he called an Obama judge. In a rare public response, Roberts said: “We do not have Obama judges or Trump judges, Bush judges or Clinton judges. What we have is an extraordinary group of dedicated judges doing their level best to do equal right to those appearing before them. That independent judiciary is something we should all be thankful for.”

The chief justice will strive to display the same sense of independence in presiding over Trump’s impeachment trial, but the limits of his role will provide few opportunities to do so.

In reflecting on his own turn as chief justice during an impeachment proceeding, Rehnquist paraphrased a line from the Gilbert and Sullivan comic opera “Iolanthe”: “I did nothing in particular, and I did it very well.”