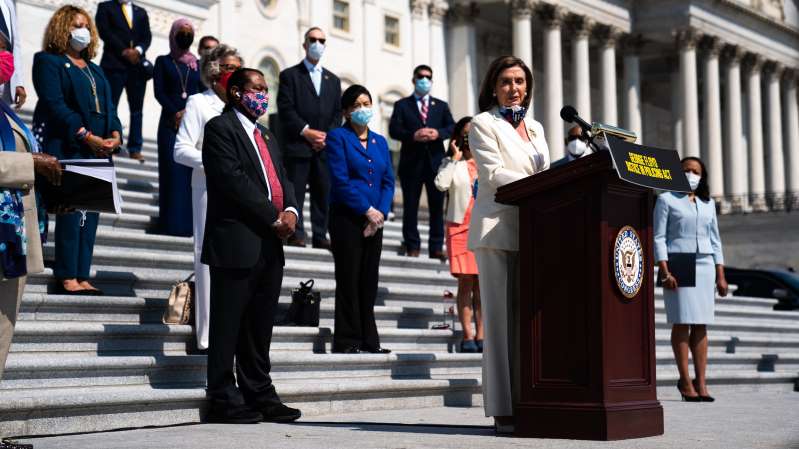 The House on Thursday passed an expansive policing overhaul bill aimed at combating racial discrimination and excessive use of force in law enforcement, as Democrats sought to respond to a nationwide outcry for racial justice and pushed through legislation that is doomed in the Republican-controlled Senate.

The bipartisan vote was 236-181 to approve the measure, the most sweeping federal intervention into law enforcement in years. It would eliminate legal protections that shield police officers from lawsuits, make it easier to prosecute them for wrongdoing, impose a new set of restrictions on the use of deadly force, and effectively ban the use of chokeholds.

But passage of the legislation, introduced as a response to the killings of black Americans across the country and a wave of protests that have followed, only underscored the depth of the stalemate in Congress over how to bring about law enforcement changes that both parties say are needed. Republicans have said the bill is a federal overreach into policing that will never pass the Senate, and the White House has threatened a veto.

Its approval came the day after Senate Democrats blocked a Republican effort to advance a much narrower bill that would encourage police departments to revise their practices, but not mandate any changes. That move all but extinguished the hope that Congress will be able to pass legislation this year addressing systemic racism in law enforcement, almost certainly shifting the debate over race and policing to the campaign trail, where the two parties will blame each other for the demise of the effort.

Still on Thursday, Democrats called the passage of their bill an important message at a time of upheaval over the treatment of black Americans by the police. Speaking from the Capitol steps, Speaker Nancy Pelosi said on Thursday that the vote would serve as a pledge to the American public: “Never again.”

“Exactly one month ago, George Floyd spoke his final words, ‘I can’t breathe,’ and changed the course of history,” Ms. Pelosi said. “The House is honoring his life and the lives of all killed by police brutality.”

Three moderate Republicans joined a united bloc of Democrats — including those facing difficult re-election fights in conservative-leaning districts — to support the legislation. The vote underscored just how quickly the politics of law enforcement have shifted during an election year amid a groundswell of public support for significant changes to the way that the police operate. Representatives Fred Upton of Michigan, Brian Fitzpatrick of Pennsylvania, and Will Hurd of Texas, the only African-American Republican in the chamber, voted in support of the bill.

“With the murders of George Floyd, Breonna Taylor, and far too many others, there was no doubt in my mind — or that of most Americans — that we needed to act,” said Representative Max Rose, Democrat of New York. “Once again, we saw that black Americans, and other communities of color, are not equal in the eyes of too many criminal justice systems around the country. This bill has the potential to change that.”

Democrats’ legislation, spearheaded by Representative Karen Bass of California, the chairwoman of the Congressional Black Caucus, included several measures that civil rights activists have been pushing for decades, such as amending the federal criminal code to make it easier to prosecute police officers for misconduct by lowering the standard that prosecutors must meet.

Over 100 civil rights groups endorsed the legislation, as did some families of black Americans killed by the police, including Gwen Carr, the mother of Eric Garner, who died in 2014 after an officer put him in a chokehold, and Samaria Rice, the mother of Tamir Rice, a 12-year-old boy who was shot for carrying a toy gun.

“From banning chokeholds to eliminating no-knock warrants, this bill will hold officers accountable to the communities they serve and compel them to have a guardian mentality, not a warrior mentality,” the families said in a statement. “In the valiant pursuit of justice, this is a strong step in the right direction.”

The bill would also create a national registry to track police misconduct and require law enforcement agencies to report data on the use of force, aim to force departments to eliminate the use of chokeholds, and condition some federal grants on the adoption of anti-discrimination training and practices.

Law enforcement organizations and police unions forcefully opposed it, mounting a successful effort to dissuade the White House and Senate Republicans from embracing the most stringent requirements and restrictions.

Hours before the vote, the White House issued an official threat to veto the measure, calling it “overbroad” and arguing that it would “deter good people from pursuing careers in law enforcement” and “weaken the ability of law enforcement agencies to reduce crime.”

Over two weeks ago, as protesters thronged streets in big cities and small towns across the nation, many lawmakers on Capitol Hill hoped that they would be able to bridge a previously insurmountable gulf on police reform efforts and pass legislation addressing systemic racism in law enforcement. Those hopes have rapidly fizzled, replaced by bitter recriminations after Senate Democrats refused on Wednesday even to allow the Republican bill to come up for debate, calling it “woefully inadequate.”

The move left Republicans apoplectic and charging that Democrats had blocked the legislation for political gain. Representative Kevin McCarthy, Republican of California and the minority leader, told reporters on Thursday that he had reached out to Democrats “explaining that I wanted to make law, I wanted to work together.”

On the other side of the Capitol, Senator Mitch McConnell, Republican of Kentucky and the majority leader, chided Senator Chuck Schumer, Democrat of New York and the minority leader, for his tone during the debate, charging that he had been disrespectful to Senator Tim Scott of South Carolina, the sponsor of the Republican bill and the only black senator in the party.

“I didn’t see why the Democratic leader talks right past Senator Scott as if he were not leading this discussion, as if he were barely here,” Mr. McConnell said on the floor. “All I can say is that it was jarring to witness.”

In fact in his remarks on Wednesday, Mr. Schumer called Mr. Scott “greatly respected” and asked Mr. McConnell to have the South Carolina Republican lead a bipartisan effort to negotiate a new, more expansive Senate policing bill. Republicans rejected that entreaty, and Democrats moved to block their bill.

Ms. Pelosi endorsed the decision to block the Republican bill, saying it did not contain “anything they could vote for.”

“You all gave them so much credit for a bill that did nothing and then expected us to embrace it,” she told reporters. “No way. They did the right thing.”

Both Republicans and Democrats have insisted that the opportunity to revive policing reform efforts has not been foreclosed. But given the partisan gridlock, and with lawmakers in both chambers expected to be out of Washington for extended periods of time leading up to the November election, many of them privately concede that a compromise will be difficult to strike.