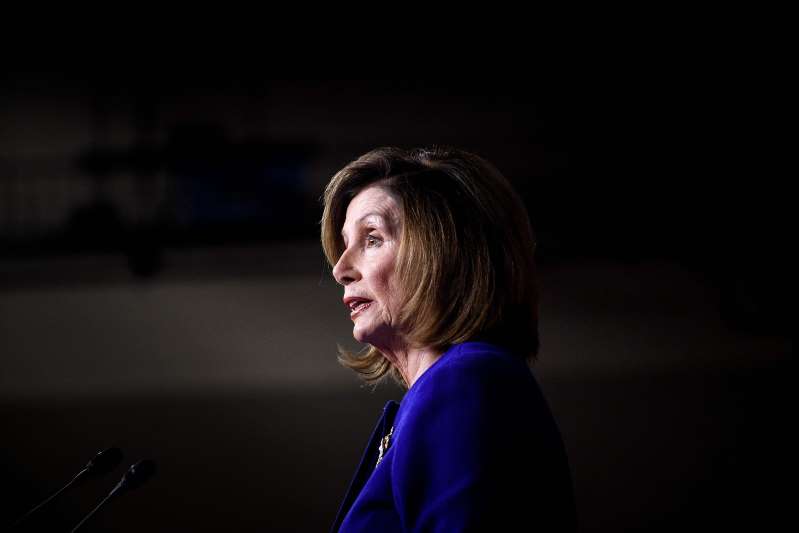 The House adopted a war powers resolution Thursday with the aim of limiting President Donald Trump’s military actions against Iran.

The adoption of the measure 224-194 on a largely party-line vote came amid heightened tensions between the two countries after the United States killed top Iranian Gen. Qassem Soleimani and Iran retaliated with a ballistic missile attack against Iraqi airbases housing U.S. forces.

Republicans Thomas Massie of Kentucky, Matt Gaetz and Francis Rooney, both of Florida, voted for the measure, while eight Democrats voted against it: Joe Cunningham of South Carolina, Josh Gottheimer of New Jersey, Kendra Horn of Oklahoma, Elaine Luria of Virginia, Ben McAdams of Utah, Anthony Brindisi, Stephanie Murphy and Max Rose, all of New York.

Before the vote, Speaker Nancy Pelosi, D-Calif., criticized the U.S. drone attack on the Iranian commander and said the resolution would send a clear statement that Trump should not take further military action against Iran without approval from Congress.

“Last week, in our view, the administration conducted a provocative disproportionate airstrike against Iran which endangered Americans, and did so without consulting Congress,” Pelosi said at her weekly press conference.

Asked if the Trump administration misled the American public in justifying the airstrike, Pelosi said that while she can’t share the classified information that she was briefed on, “I do not believe in terms of what is in the public domain that they have made the country safer by what they did.”

Pelosi said that when she was briefed on the airstrike over the weekend by Secretary of Defense Mark Esper and Chairman of the Joint Chiefs of Staff Mark Milley, she said that they were “disdainful in terms of not consulting Congress” and “dismissive.”

The president himself, asked Thursday about whether congressional authorization was needed for further military action against Iran, said “you don’t have to,” pointing to a need to “make split-second decisions.”

Still, he said, “in certain cases, I wouldn’t even mind doing it.”

The five-page resolution, sponsored by freshman Rep. Elissa Slotkin, D-Mich., a former CIA analyst, emphasizes that if the president wants to take the U.S. to war, he or she must get authorization from Congress.

Specifically, it directs the president to terminate the use of U.S. armed forces to engage in hostilities against Iran unless Congress has declared war or enacted a specific authorization or unless military action is necessary to defend against an imminent attack.

The legislation also makes clear that Iran’s government is a lead state sponsor of terrorism and that Soleimani was the “lead architect” of destabilizing activities around the world. It further states the U.S. has an “inherent right to self-defense against imminent armed attacks” and “maintains the right to ensure the safety of diplomatic personnel serving abroad.”

The White House later Thursday denounced the resolution as “misguided.”

“The President has the right and duty to protect this nation and our citizens from terrorism. That’s what he continues to do, and the world is safer for it,” spokesman Hogan Gidley said in a statement. “This House resolution tries to undermine the ability of the U.S. Armed Forces to prevent terrorist activity by Iran and its proxies, and attempts to hinder the President’s authority to protect America and our interests in the region from the continued threats.”

Although Pelosi said the measure has “real teeth,” because it is a concurrent resolution, it would not have to go to the president’s desk for his signature, leading GOP lawmakers to assert that the measure would be legally nonbinding.

“This is a statement of the Congress of the United States. I will not have that statement diminished by having the president veto it or not,” Pelosi said.

A senior Democratic aide noted that the War Powers Act sets out a clear process for the House legislation. The law says “forces shall be removed by the president if Congress so directs by concurrent resolution.”

House Minority Leader Kevin McCarthy, R-Calif., countered that notion Thursday, saying, “This resolution has as much force of law as a New Year’s resolution.”

At his weekly press conference earlier Thursday, McCarthy said, “This is a meaningless vote that only sends the wrong message that the House Democrats would rather stand with the socialist base than stand against Iran.”

Because the resolution is privileged, the Senate could be forced to vote on the House-passed bill or a similar resolution that’s been introduced by Sen. Tim Kaine, D-Va.

The Defense Department said that the Soleimani strike was “aimed at deterring future Iranian attack plans” and that the Iranian commander had been actively developing plans to attack U.S. diplomatic and service members in Iraq and in other parts of the region.

Democrats have demanded that the administration share the intelligence backing that assertion with lawmakers. Many of them left classified briefings by top administration officials on Capitol Hill on Wednesday saying they were dissatisfied with the information presented that Soleimani posed an immediate threat to the U.S., or that the administration had the proper legal justification for targeting him.

After the strike, Democrats expressed worry that it would spark a war with Iran, which they said can only be declared by Congress. Top officials have said they based the strike on the 2002 authorization for the use of military force that Congress passed to authorize the war against Iraq when it was led by Saddam Hussein.

Iran retaliated Tuesday when it launched a dozen ballistic missiles from Iran targeting U.S. bases in Iraq. On Wednesday morning, Trump announced that Iran appeared to be “standing down.”

Two GOP senators — Rand Paul of Kentucky and Mike Lee of Utah — left the Senate briefing Wednesday echoing the frustrations of Democrats on the basis for the decision to target Soleimani, with Lee saying “it was probably the worst briefing I’ve seen, at least on a military issue, in the nine years I’ve served in the United States Senate.”

Trump said Thursday that Lee and Paul had “wanted information that is very hard to get” due to the need for the military to protect sources. “I get along great with Mike Lee, I’ve never seen him like that” he said, adding that “other people have called and said it was the greatest presentation.”

Pelosi said that the House will soon consider another proposal from Rep. Barbara Lee, D-Calif., which would repeal the 2002 use of force authorization. “It needs to be addressed, it needs to be rewritten … specific to the danger that we are facing,” she said.