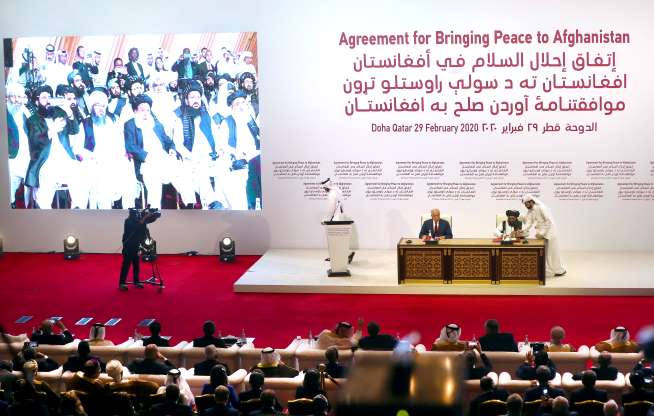 U.S. and Taliban negotiators signed an historic agreement Saturday in Qatar that could end 19 years of war in Afghanistan and allow President Donald Trump to begin the promised withdrawal of American troops.

Zalmay Khalilzad, the top U.S. negotiator, signed the pact as Secretary of State Mike Pompeo looked on. It sets the stage for further negotiations that could lead to a permanent peace treaty between Afghanistan’s government and the Taliban insurgency. It has several contingencies, among them not allowing Afghanistan to be used as a base for terrorists who threaten the United States.

However, a permanent peace and an end to the longest war in U.S. history rests on a commitment by the Taliban, a fractious insurgency, to renounce violence and al Qaeda terrorists that used Afghanistan as a base to stage the Sept. 11 terrorist attacks.

“If the Taliban and the government of Afghanistan live up to these commitments, we will have a powerful path forward to end the war in Afghanistan and bring our troops home,” the president said in a statement released ahead of Saturday’s signing ceremony in Doha.

Under the new agreement, the United States will begin a phased withdrawal from Afghanistan, drawing down to 8,600 troops from 13,000. In exchange, the Taliban agreed to sever its ties with al Qaeda, the terrorist group that launched the Sept. 11 attacks against the U.S.

If the Taliban fulfills its promises to renounce al Qaeda and begin intra-Afghan talks, the U.S. agreed to a complete withdrawal of all remaining American forces from Afghanistan within 10 months.

The pace of withdrawal will be “calibrated” with the Taliban’s commitment to ending violence, Pompeo said in Qatar.

The Taliban also agreed to open negotiations with the Afghan government on a power-sharing deal that American officials hope will eventually lead to a permanent end to the bloody conflict there and a full withdrawal of American forces.

The U.S.-Taliban deal, negotiated over a year, was finalized after seven days of reduced violence, a confidence-building measure both sides undertook as a prerequisite to inking a peace agreement.

The announcement comes with caveats. In September, negotiators hailed a breakthrough in talks only to see hope for peace dissipate and violence continue. A withdrawal of American troops also would likely take several months.

“It’s not like … this will bring flowers and roses and doves overnight,” said a senior administration official, who briefed reporters on the condition of anonymity.

The next step will be even more challenging: getting the Taliban and the Afghan government – bitter opponents with sharply divergent views about the future of their country – to hammer out a peace agreement in a country riven by tribal factions, devastated by war, and overrun with criminal and terrorist elements.

Those talks are expected to begin is Oslo within 10 days, but neither side has designated negotiators yet. And the Afghan government, backed by the U.S., is in the midst of a political crisis, with two leaders proclaiming victory in the country’s September election.

© KARIM JAAFAR, AFP via Getty Images US Secretary of State Mike Pompeo arrives to the signing of a US-Taliban agreement in the Qatari capital Doha on February 29, 2020. – Washington and the Taliban are set to sign a landmark deal in Doha that would see them agree to the withdrawal of thousands of US troops from Afghanistan in return for insurgent guarantees. (Photo by KARIM JAAFAR / AFP) (Photo by KARIM JAAFAR/AFP via Getty Images) ORIG FILE ID: AFP_1PG2OZ

The reduction in violence is supposed to continue as the intra-Afghan talks proceed, and the U.S. is hoping to secure a complete cease-fire in Afghanistan as one of the first elements of those talks.

Some Republicans warned against signing the deal, arguing that the Taliban is a terrorist group that cannot be trusted to live up to any commitments.

“The Taliban is a terrorist group that celebrates suicide attacks,” Rep. Liz Cheney, R-Wyo., wrote in a letter this week signed by 21 other GOP lawmakers. “Any promises the Taliban may have made to the U.S. related to counter-terrorism cannot be trusted,  not least because this group is a long-time ally of al Qaeda.”

Previewing the agreement earlier this week, Secretary of State Mike Pompeo seemed to concede the peace deal was not a resounding victory but rather a practical way to extricate American troops from what has been a horrific and costly war.

“We have to be realistic. We’re proud of our gains, but our generals have determined that this war is unlikely to be won militarily without tremendous additional resources,” he told reporters in Washington on Tuesday. “All sides are tired of fighting. We’ve arrived at a historic opportunity for peace. It won’t be easy to obtain. We should seize the moment.”

The senior administration official said the only reason the two sides are at the table is because “all sides recognize there’s no military solution to the conflict.”

The U.S.-Taliban deal includes two main elements: The Taliban must sever ties with terrorist groups such as al-Qaeda and its leaders must negotiate a powersharing agreement with the Afghan government; in exchange, the U.S. will begin a phased drawdown of troops.

Pompeo refused to say what, if any, red lines the U.S. would set in the intra-Afghan negotiations that are set to begin in early March. The U.S. will participate in those talks in a supportive role, he said, but will not require any guarantees for women’s rights or other democratic reforms.

But Afghan civil society and women’s groups will be part of the negotiations, said a second administration official, who also spoke to reporters on the condition of anonymity. It will be a “very high priority for us” to protect women’s rights, this official said.

“We aren’t without influence in the process going forward. The United States is still a major presence in Afghanistan,” this official said. “There’s all sorts of ways that we and others will be able to help defend the rights of women in Afghanistan, and certainly, that would be very much” in the interest of the United States.

Before the 2001 U.S. invasion, the Taliban subjected women and girls to ruthless violence and oppression. Women could not work or study; they could not leave their homes without a man; and they could be flogged for showing even an inch of skin under mandated full-body veils, known as burqas.

Afghan women have seen enormous gains in the wake of the 2001 international intervention, with many schools now open to girls and some women allowed to work and be involved in the political process. It is not clear if any of those changes will be preserved in the intra-Afghan negotiations.

Meanwhile, the war-torn country remains violent and divided. On Feb. 8, two Army Special Forces soldiers were killed in Afghanistan. Insurgent attacks that caused casualties in the last quarter of 2019 were at the highest level since recording began in 2010, according to a report by the Special Inspector General for Afghanistan Reconstruction.

The inspector general also found fault with the administration’s lack of a strategy to deal with narcotics, which generate cash the Taliban uses to pay fighters and buy weapons and bombs.

Taliban insurgents retain control over large portions of the countryside, while the government primarily holds sway in large cities like the capital Kabul. Extremist groups linked to ISIS remain active in rural areas.

In addition, the U.S. conducted more airstrikes in Afghanistan in 2019 than in any other year of the war, including 2011, the year of peak U.S. involvement with 100,000 troops on the ground.

There are about 13,000 U.S. troops in Afghanistan. Their mission is split between training Afghan security forces and conducting counter-terrorism missions.

Pompeo acknowledged that talks could fail to achieve a permanent peace.

“ … I think we’re all eyes wide open about the complexity and the challenges. There’s a reason it’s been this long since they’ve sat at the table together. They have deeply divergent views,” he said.

More than 2,400 U.S. troops have been killed there, and more than 20,000 wounded in the fighting. Last year, the Pentagon estimated the cost to taxpayers for the war there at $737 billion.

Trump announced during a visit to Afghanistan on Thanksgiving that peace talks had resumed after a brief hiatus last year.

“The Taliban wants to make a deal – we’ll see if they make a deal. If they do, they do, and if they don’t, they don’t. That’s fine,” Trump told reporters traveling with him.

In September, Trump abruptly canceled a then-secret summit with the Taliban, as well as Ghani and other Afghan officials, after the militant group killed a U.S. soldier. That controversial meeting, aimed at finalizing an agreement that had been in the works for months to reduce U.S. forces in Afghanistan, would have taken place at Camp David two days before the 18th anniversary of the Sept. 11, 2001, terrorist attacks.