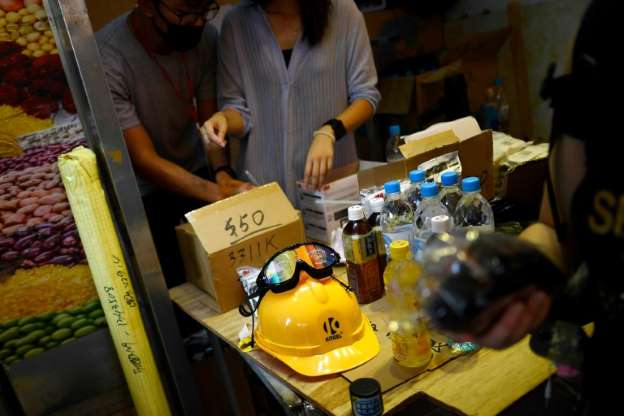 Lee Ching-hei runs a pop-up store in Hong Kong but instead of offering the latest food trends or fashion must-haves he sells another highly sought-after commodity: protest supplies.

Helmets, goggles and gas masks are bestsellers at “National Calamity Hardware”, which has held two pop-up sessions in the districts of Mong Kok and Tai Po — both major hotspots during Hong Kong’s two months of huge, sometimes violent, pro-democracy protests.

“We sold 50-60 sets of gas masks in the first hour of business, so we’re sold out now,” the 33-year-old businessman said while fitting a customer for a helmet ahead of a planned protest in Hong Kong’s Tai Po neighbourhood.

Lee said he had been an avid collector of gas masks — dubbed pig snouts in Cantonese — even before the protests began.

“So I had a really large number of 3M masks saved up,” he said, referring to the most popular brand among protesters as his shop bustled with customers.

Hong Kong’s protesters have been gearing up with increasingly protective equipment as clashes become more violent.

While millions have hit the streets for peaceful rallies, a minority of hardcore demonstrators have used bricks, Molotov cocktails and slingshots after police began routinely using tear gas and rubber bullets to disperse crowds.

The demonstrations started as rallies against a controversial bill that would allow extraditions to mainland China, but have since morphed into a call for greater democratic reform in the semi-autonomous city.

Now in their 10th week, the protests have seen violence escalate on both sides.

One woman suffered a horrendous eye wound last weekend — something demonstrators have blamed on a bean-bag round — and dozens have been hospitalised with serious injuries.

The police have also reported casualties. In clashes last weekend, an officer sustained burns to his legs from a Molotov cocktail.

Lee said he sells supplies at a big discount to students, nearly 90 percent off, portraying his involvement as both a business opportunity and also a way to help young people.

The best gas masks sell for around HK$1,000 (around US$130), but they are increasingly hard to come by with many shops running out.

“I don’t have much sense for stocktaking and price-setting, so basically we lose money,” he admitted.

“The youngsters aren’t even afraid of dying. Why should we be afraid of losing reputation and money or bankruptcy?”

The vast majority of Hong Kong’s pro-democracy protesters are university-educated with almost half in their twenties, according to a recent survey by multiple universities.

Lee uses Facebook and Telegram — a messaging app popular among protesters — to advertise his appearances.

He rents a store for a single day but grumbles over an issue that has long fuelled anti-government sentiment — eye-watering property prices.

“Rents are too high in Hong Kong,” he fumed. “So we’re open today, closed tomorrow.”