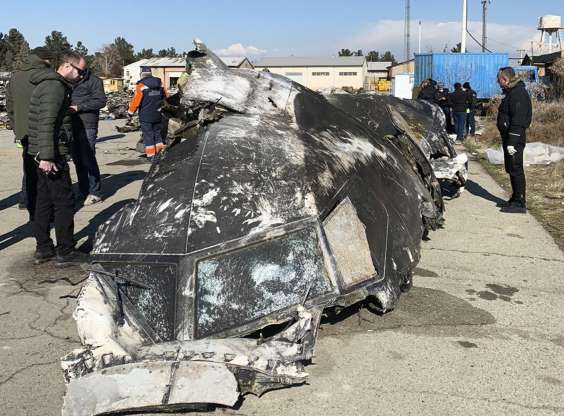 Iran’s stunning admission that its forces errantly downed a Ukrainian jetliner — reversing three days of denial — did little to quell growing fury inside the country and beyond on Saturday as the deadly tragedy turned into a volatile political crisis for Tehran’s leaders and overshadowed their struggle with the United States.

Ukrainian officials in the capital Kyiv criticized Iran’s conduct, suggesting that the Iranians would not have admitted responsibility if investigators from Ukraine had not found evidence of a missile strike in the wreckage of the crash, which killed all 176 people aboard.

Protests erupted in Tehran and other Iranian cities as dumbfounded citizens found a new reason to mistrust Ayatollah Ali Khamenei, Iran’s supreme leader and other officials. Protest videos even showed some shouting “Khamenei is a murderer!” and anti-riot police tear-gassing violent demonstrators.

President Volodymyr Zelensky of Ukraine, in his first reaction to Iran’s announcement, said his country would “insist on a full admission of guilt” by Tehran.

Contradictions and miscues complicated Iran’s message even as it took responsibility for the disaster. Iran’s military, in its initial admission early Saturday, said the flight’s crew had taken a sharp, unexpected turn that brought it near a sensitive military base — an assertion that was immediately disputed by the Ukrainians.

Hours later, an Iranian commander who accepted full responsibility for the disaster agreed that the Ukrainians were right.

“The plane was flying in its normal direction without any error and everybody was doing their job correctly,” said the commander, Gen. Amir Ali Hajizadeh, who leads the airspace unit of the Islamic Revolutionary Guards Corps — a powerful, hard-line military force. “If there was a mistake, it was made by one of our members.”

The New York Times has obtained and verified video showing the moment a Ukrainian airliner was hit in Iran.CreditCredit…Screenshot from video

The Ukrainians further accused Iran of having recklessly permitted commercial flights during a security emergency and of having violated universally accepted procedures for a post-crash investigation. Bulldozers had heaped debris from the plane into piles on the ground.

“Everything was done absolutely inappropriately,” Oleksiy Danilov, the Ukrainian security official overseeing the crash inquiry, said in an interview with The New York Times, referring to how Iranian authorities had handled the site of the crash.

Within Iran, citizens vented anger toward their government in the first hours after the admission and President Hassan Rouhani called the error an “unforgivable mistake.” General Hajizadeh, whose forces were responsible, said he had wished death upon himself because of the blunder.

“Death to liars!” and “Death to the dictator!” shouted Iranians gathered in squares in the capital Tehran, videos shared on social media showed. “You have no shame!” shouted several young men, and the crowd joined in a chorus.

Iranians who only a few days earlier were united in outraged grief over the American killing of a storied Revolutionary Guards leader, Maj. Gen. Qassim Suleimani, were now once again out en masse protesting their government.

Many carried candles and placed flowers at the gates of the universities and other public places in Tehran. Conservatives and supporters of the government accused the authorities of having intentionally misled the public initially about what had brought down the plane. Its passengers included many young Iranians on their way to Canada for graduate study.

The plane went down in fiery destruction just a few minutes after having departed Tehran’s Imam Khomeini airport Wednesday morning, only hours after Iranian military forces had fired a barrage of missiles at bases in Iraq housing American troops in retaliation for the killing of General Suleimani by a United States military drone in Baghdad on Jan. 3.

Iran’s aerial defense forces, worried about possible American reprisals for the missile attack, were on alert — even though commercial aviation in Iran was allowed to proceed normally.

For three days after the crash, Iranian officials not only denied their military forces were responsible but blamed what they called the aircraft’s mechanical problems and said suggestions of Iranian culpability were American propaganda. Satellite surveillance and video clips of the plane strongly suggested Iran’s own air defense missile system blasted the plane out of the sky.

The Iranians reversed themselves early Saturday.

The newly critical language by Ukrainian officials in the aftermath of Iran’s admission stood in sharp contrast to more cautious statements in recent days. It partly reflected the frustrations in a country that had been thrust in the middle of the conflict between the United States and Iran.

The Trump administration made no immediate comment on Iran’s admission of responsibility.

Mr. Danilov, the Ukrainian security official, said Iran had been forced into conceding its military had brought down the jet because the evidence of a missile strike had become overwhelmingly clear to international investigators.

He said Ukrainian experts on the ground in Iran had gathered such evidence since their arrival on Thursday despite apparent Iranian efforts to complicate the investigation, including by sweeping debris into piles rather than carefully documenting it.

Mr. Zelensky’s office posted on Facebook photos of what appeared to be shrapnel damage on the plane wreckage and a Canadian man’s passport showing piercings about half an inch in diameter — consistent with the hypothesis that shrapnel from a surface-to-air missile hit the plane.

“We expect Iran to assure its readiness for a full and open investigation, to bring those responsible to justice, to return the bodies of the victims, to pay compensation, and to make official apologies through diplomatic channels,” Mr. Zelensky said in a post on his Facebook page. “We hope that the investigation will continue without artificial delays and obstacles.”

The official reaction from Iran was a mix of contrition and suggestions that the tragedy should be viewed as a consequence of American hostility.

Mr. Rouhani, in a statement cited by the Fars News Agency, offered condolences to the victims’ families and said that “the terrible catastrophe should be thoroughly investigated.”

The Iranian expressions of remorse were met with frustration by Ukrainian aviation officials who had been struggling since the crash to get meaningful information from Iran about what had actually happened.

“Even in the statement of Iran there is a hint that our crew was acting independently, or that it could have acted differently,” said the airline director, Yevhenii Dykhne.

The crew received no warning before leaving Tehran, the Ukrainian officials said. The plane took off as Ukrainian flights from Iran had dozens of times before, and followed the same departure routes as other airliners leaving that morning, Ihor Sosnovsky, the vice president for flight operations, told journalists.

“There was no deviation from any routes that some are hinting at,” he said.

The crew maintained normal radio contact with the tower in Tehran, he said, and followed a standard departure procedure for the airport. After having reached an elevation of 6,000 feet, they were instructed to make a slight northerly turn. In the last communication, he said, one of the pilots read back this instruction from the tower, saying “turn and climb.”

Addressing criticism that the airline should not have sent a plane to Iran at all, in light of tensions in the region, the airline officials said it was Iran’s responsibility to close airspace if it had intended to fire missiles.

Mr. Danilov said Iran had no choice but to admit to shooting down the plane because the facts had become apparent to Ukrainian experts on the ground and to the international community.

The “cherry on top” in Ukraine’s probe, he said, came on Friday evening Iran time, when Ukrainian investigators found fragments of the top part of the airplane cabin that had been pierced by what appeared to be the shrapnel of a missile warhead.

“As we saw it, Iran had to face the reality that there’s no way they’ll get out of this,” Mr. Danilov said.

In the hours immediately after the crash, Mr. Danilov said, Iran was resistant to letting Ukraine conduct its own investigation. He said the possibility that international aviation authorities might shut down passenger flights to Tehran also placed enormous pressure on Iran.

“They said: ‘Sorry, this was a technical error, either due to the pilots or the technical condition of the airplane.’ We said: ‘Let us have a look.’ They said: ‘We won’t let you,’” Mr. Danilov said. “It took rather concerted efforts of our diplomats and our consul working there in order to make sure everything went well for our specialists.”

Mr. Zelensky spoke by phone to President Emmanuel Macron of France, and both agreed that French specialists would help decode the plane’s black box flight recorders.

Mr. Hajizadeh, the Iranian official who accepted responsibility for the missile strike, said the plane had been misidentified as a cruise missile and was shot down with a short-range missile that exploded near the plane.

He said the Iranian missile operator had acted independently because of “jamming.” Asked during his address why Iranian airspace was not shut to commercial air traffic amid the attacks, Mr. Hajizadeh had no clear answer.

“I wish I was dead,” Mr. Hajizadeh was quoted as saying by local news outlets. “I accept all responsibility for this incident.”