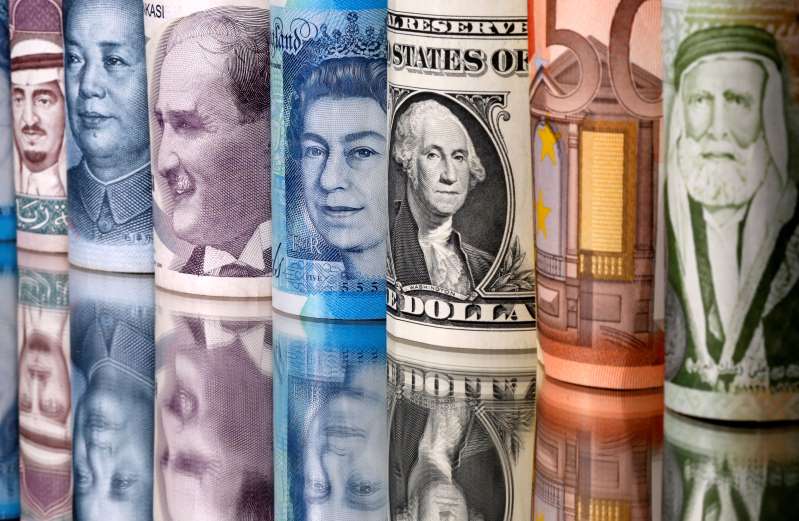 The dollar was under pressure on Wednesday, after upbeat data in Europe boosted the euro and helped stoke hopes for a global economic recovery, underpinning investor appetite for riskier currencies.

That is still below the 50 mark separating growth from contraction, but the strong rebound – together with upbeat data in Britain and the United States – lent support to a sense that growth is returning at pace.

It also seemed enough for now to offset worries about a resurgence in U.S. coronavirus cases, and to draw bets – reflected in a rising gold price – on broad dollar weakness.

The euro is headed for its best month against the dollar since October, and in morning trade clambered back toward a one-week high hit overnight, last buying $1.1321. The risk-sensitive Australian dollar led morning moves, with a 0.3% gain to $0.6952, pushing it towards the top end of the range that it has held for a couple of weeks. [AUD/] The New Zealand dollar was down slightly on the day at $0.6477 after the country’s central bank said the balance of economic risks remains to the downside and it is prepared to use additional monetary tools as necessary.

The RBNZ kept interest rates on hold, as expected.

“We’re still seeing the counteracting forces of the economic recovery on the one hand and concerns around the virus spreading on the other hand,” said Kim Mundy, FX analyst at the Commonwealth Bank of Australia in Sydney.

“But overnight the Eurozone PMIs lifted, PMIs in the UK lifted and PMIs in the U.S. lifted, so the economic story, that we are seeing the recovery, is helping to underpin the commodity currencies.”

The mood lifted the British pound a fraction higher to $1.2524 and helped scrape it off a three-month low against the euro . The yen held on to overnight gains at 106.46 per dollar, reflecting caution and also corporate flows as investment juggernaut SoftBank <9984.T> started a $21 billion sale of its stake in U.S. telco T-Mobile .

The moves came in spite of a spike in coronavirus cases.

For a second consecutive week, Texas, Arizona and Nevada set records in their coronavirus outbreaks, and 10 other states from Florida to California were grappling with a surge in infections.

Australia has reported its first COVID-19 death in more than month, amid an upswing in new cases in Victoria state, where some restrictions on gathering have been re-imposed.

Investors are so far betting that this will not prompt further lockdowns, or dent global economic recovery.

“We expect over the coming couple of weeks as we get more clarity on this, state Governors will be in a better position to decide how to proceed,” RBC Capital Markets’ Chief U.S. Economist, Tom Porcelli, said of the U.S. cases.

“For now, we have not seen any negative shift in consumer behaviour as a result.”