Skip to content
Home » Foreign Policy » Do Joe Biden and the Democratic Party Understand the Threat Posed by China?
Previous Next

Do Joe Biden and the Democratic Party Understand the Threat Posed by China? 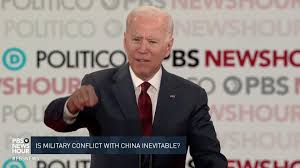 In an October interview with “60 Minutes” correspondent Norah O’Donnell, President-elect Joe Biden stated, “Well, I think the biggest threat to America right now in terms of breaking up our — our security and our alliances, is Russia.”

Does the former vice president truly believe this? If he does he is either naïve or woefully unprepared to face the challenges he will assume once he is officially inaugurated in January.

A famous quote uttered by the famous Chinese General Sun Tzu seems to sum up Biden’s approach of the threat posed by China.  This statement was true over two millennium ago and it’s certainly true today. “If you know the enemy and know yourself, you need not fear the result of a hundred battles. If you know yourself but not the enemy, for every victory gained you will also suffer a defeat.  If you know neither the enemy nor yourself, you will succumb in every battle.”

Unfortunately, for Biden and the Democrats they seem to live in a world of illusions, always hoping for a world they wish to live in, never understanding the world they currently are in. Which fundamentally means do you know who your true enemy is?

Russia is threat, but they are not even on the same political, economic, and military levels of the threat posed by China.

China is vastly different, from Russia, in security challenges. Beijing is trying to supplant the United States and dominate in trade, industry, and technological development, primarily coming from stealing America’s intellectual properties.

This begs the question do Biden and the Democrats understand the threat posed by China?  Throughout the 2020 presidential campaign, the media has failed to ascertain from Biden his decade long support for every trade deal and agreement with China since he joined the Senate in 1973.

One aspect as Brandon Weichert, wrote in “America Surrenders to China” is there is a “… new space race between the United States and China. Private launch companies, including SpaceX, have revolutionized America’s overall space sector. But the lack of political vision or leadership means that real gains for America in space will be slowly realized, if ever. President Trump was the only American leader in decades who seemed to understand the promises and challenges of space. Yet, the rest of the government never fully embraced Trump’s robust space program.

Throughout the 1990’s when China was struggling in its missile and satellite programs Mike Armstrong, CEO of Hughes Electronics, the leading U.S. satellite builder, lobbied heavily to the Congress and the Clinton administration to allow his company to assist China.

Even Bernard Schwartz, the CEO of satellite maker Loral, who during this period and a prolific fundraiser for the Democratic Party, and with this relentless pressure the government relented.  The U.S. helped China’s satellite and missile program get off the ground.

While Biden was in the Senate his entire career was acquiescing and supporting every overture, agreement and trade deal with China. The recent alleged revelations that Biden’s son Hunter made millions utilizing his father’s position while he served as vice president only to be suppressed just months ago by the media and the tech industry companies. This is now coming to light, but shows how the Biden family allegedly profited from business dealings inside China. Meanwhile, Joe Biden served as vice president, this should give Americans pause on how tough Biden will be on Beijing.

What we don’t know nor was Biden asked throughout the campaign, is what he would do differently from Trump?  Prior to serving as vice president, Biden served, over twelve years, as either the chairman or ranking minority member of the Senate Foreign Relations Committee with oversite over U.S. foreign policy toward China.

Additional questions should be asked of Biden, since he was President Obama’s point person on China.  Especially his warm words toward then Chinese Vice President XI, who would become China’s next leader.  How would he handle China now?

Do the Democrats really understand the threat posed by China? A recent development involves Democratic Rep. Eric Swalwell who may have had a close relationship with a suspected Chinese spy who fled back to China a few years prior.  This situation is even more tantalizing for the fact that Swalwell is a member of the House Intelligence Committee.  All we hear from the media, Biden and Democrats is crickets.

One only has to remember back in 2013, when China hacked into the Office of Personnel Management (OPM) and obtained the personnel records of over 22 million individuals who had undergone background checks, to include families and friends.  What was the purpose of this hack by China? Could this be the reason?

Even Democratic House Speaker Nancy Pelosi stated, “I don’t have any concern about Mr. Swalwell.”  Pelosi continued “In terms of Mr. Swalwell — in the spring of 2015, the leadership of the House and the [Intelligence] Committee were informed that overtures from a Chinese person were being made to members of Congress,” Pelosi said. “When that was made known to the members of Congress, it was over.”

Why was he allowed to remain on the House Intelligence Committee? If this were a Republican would they get the same treatment? Little attention was paid to a staffer who served as Democratic Senator Diane Feinstein’s driver for some twenty years, but also was a Chinese intelligence operative. In this capacity the individual was aware of where she went, who she met with, knowledge of any conversations she might have had in the car, and access to any documents that were left in the car.

Would a Republican receive the same treatment?

This was far different when these same individuals were calling for treason charges against Donald Trump Jr.  When a liberal Democratic member of Congress is accused with far more extensive contacts everyone is now quite! Why?

In the month prior to the November election, the New York Post broke a story about Biden’s son Hunter who was heavily involved in nefarious business dealings with China and Chinese businesses that has ties to the Chines Communist Party.  This bombshell report was suppressed by the mainstream media and American tech companies, and only now is coming to the forefront.

For decades Biden, Democrats and Republicans have believed that if they accommodate China over time they would become less authoritative, instead the opposite has happened.

President Trump has been the first American leader to call out and confront the threat posed by China.  Unfortunately, for America, Biden was never asked what he would do differently with regard to China.  Even Vice President-elect Kamala Harris, when asked during a debate what would a Biden administration do differently from Trump, she could not be direct in answering.

All she stated was that Trump’s China policies have been a failure, but both Biden and Harris have been never pressed by the media for how they would challenge Beijing, or even if they believed they are a threat.

Remember early in the run-up to the 2020 presidential race, during the Democratic primary, Biden stated, “China is going to eat our lunch? Come on, man.”

“I mean, you know, they’re not bad folks, folks. But guess what? They’re not competition for us,” former vice president Biden added.  Biden was forced to take back that statement, but does he truly believe they are a threat or not, considering he thinks Russia is America’s number one national security threat.

Director of National Intelligence John Ratcliffe wrote an op-ed in the Wall Street Journal stating, “The intelligence is clear: Beijing intends to dominate the U.S. and the rest of the planet economically, militarily and technologically. Many of China’s major public initiatives and prominent companies offer only a layer of camouflage to the activities of the Chinese Communist Party.”

Even former Treasury Secretary Henry Paulson, in the Bush Administration, recently commented that China is trying to become the world’s banker supplanting the U.S.  If allowed, this would have severe economic repercussions for America and the global financial system.

With Biden’s decades long support of Chinese trade agreements and his comments that China is not a threat, leaves it a confusing aspect how he would deal with Beijing, considering his cozy past relationship and that of his family.  In 2015 the Obama-Biden administration turned a blind eye when in 2015, Beijing issued its national strategic plan, called “China 2025” where they plan on dominating all aspects of manufacturing and technology.

Prime Minister Li Keqiang launched “Made in China,” (MIC 2025) which set in motion China’s national strategy to modernize its industrial capacity in 10 strategic sectors.  This national strategy went unnoticed by the United States, as Beijing would begin dominate each of these key technological sectors.  Thus, securing China as a global powerhouse.

Beijing’s primary goal is not to compete with the rest of the world but to dominate with China as the center, crushing the United States as the world’s technological leader.  The liberal economics would be eliminated in favor of an economic system controlled and dominated by China.

Ratcliffe mentioned this month that the FBI frequently arrests Chinese nationals for stealing research-and-development secrets. Until the head of Harvard’s Chemistry Department was arrested earlier this year, China was allegedly paying him $50,000 a month as part of a plan to attract top scientists and reward them for stealing information. The professor has plead not guilty to making false statements to U.S. authorities. Three scientists were ousted in 2019 from MD Anderson Cancer Center in Houston over concerns about China’s theft of cancer research. The U.S. government estimates that China’s intellectual-property theft costs America as much as $500 billion a year, or between $4,000 and $6,000 per U.S. household.

The question for Biden does he view China as a threat, because when he rolled out his national security team, China was not mentioned once.  With all the contentious and hostile actions by Beijing toward the U.S., it’s interesting that China wasn’t mentioned one time, nor had the media asked the incoming president anything about China.

Senior Fellow and Director for Chinese Strategy, at the Hudson Institute, Michael Pillsbury recently commented that Biden’s national security team in recent articles and statements is strong on rhetoric, but stop woefully short of calling China a threat. Considering that Biden wants a climate deal and needs China, would Biden look the other way just to secure a deal?