Skip to content
Home » U.S. Politics » Democrats Scale Back Language as Trump and GOP Press Ahead With Attacks on Senate Impeachment Trial
Previous Next 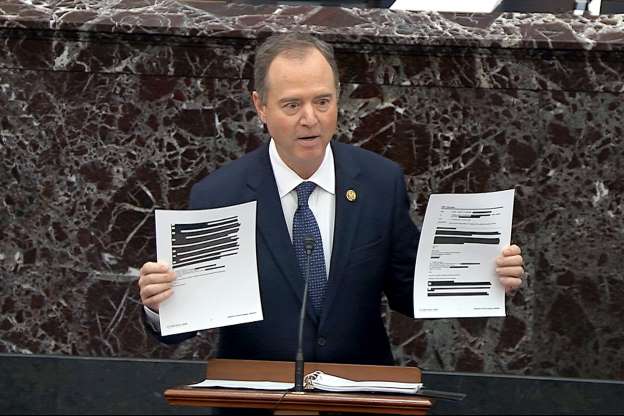 House Democrats charged with prosecuting the impeachment case against President Trump on Wednesday scaled back their fiery language following a rare scolding from Chief Justice John G. Roberts Jr., as they began laying out their case for Trump’s removal from office for pressuring Ukraine to help him win reelection.

But as Democrats softened their tone if not their message, Trump and his fellow Republicans dialed up their partisan rhetoric, with GOP senators largely ignoring Roberts’s admonition and leveling scathing attacks against the trial’s prosecutors.

Democrats also appeared to shut down talk of a deal to secure testimony from former national security adviser John Bolton by offering to trade testimony from the son of former vice president Joe Biden, who was the focus of Trump’s alleged pressure campaign on Ukraine. Biden himself said he would refuse such an arrangement.

The Republican barrage was led by Trump himself, who in Davos, Switzerland, called the top House managers “sleazebags” while denouncing his impeachment as a “hoax” and “disgrace” to his presidency.

“I watched the lies from Adam Schiff. He’ll stand, he’ll look at a microphone, and he’ll talk like he’s so aggrieved,” Trump said at a news conference from the World Economic Forum in Davos, referring to the House Intelligence Committee chairman leading the prosecution.

As he flew back to Washington on Air Force One, Trump stirred up a veritable Twitter storm as he tweeted and retweeted messages primarily about impeachment, particularly from his Republican defenders — a barrage that marked the most tweets of any day of his presidency, with 142 as of 10 p.m., according to Factba.se , a website that tracks Trump’s tweets and speeches.

That posturing provided a sharp contrast to the Democratic House managers, who struck a chastened tone in the Senate chamber Wednesday after the Roberts admonishment issued in the early hours of Wednesday. Saying that the Democrats had “adrenaline going through our veins,” Schiff began opening arguments Wednesday afternoon by expressing gratitude for the senators’ attentiveness.

And Nadler, whose accusations that GOP senators were engaging in “treacherous” behavior angered Republicans, made sure to thank Roberts and the lawmakers for “your temperate listening and your patience last night as we went into the long hours.”

“I think that was an attempt to shift the tone,” said Sen. Josh Hawley (R-Mo.). “A lot of senators were offended last night at saying that a vote against their amendments was treachery, that it was a vote against the United States.”

But the politics of the trial Wednesday rippled not only in Europe and in Washington but also in Iowa, where 2020 Democratic presidential candidate Biden was confronted with questions about whether he would be willing to testify in the proceedings.

The former vice president — who, along with his son Hunter, has been the target of political investigations that Trump had asked of Ukraine — dismissed the idea that Democrats were even talking about a witness exchange involving Hunter and insisted he himself would not testify.

“The reason I would not make the deal, the bottom line is, this is a constitutional issue,” Biden said in response to a voter’s question in Osage, Iowa. “We’re not going to turn it into a farce or political theater. I want no part of that.”

Some Senate Democrats had started grappling with the prospect that they might have to greenlight witnesses desired by Republicans to subpoena key Trump administration officials. Such a decision could be made if a majority of senators agree to call witnesses after listening to opening arguments and questioning the two sides.

But Senate Minority Leader Charles E. Schumer (D-N.Y.) told reporters Wednesday that any deal with Republicans on a witness trade involving the Bidens is “off the table.” His remarks echoed those of Schiff, the lead impeachment manager, who said “trials aren’t trades for witnesses.”

Schiff laid out high expectations for senators as the trial got underway, calling on them to “decide what kind of democracy that you believe we ought to be” and what Americans can expect “in the conduct of their president.”

© AP In this image from video, House impeachment manager Rep. Zoe Lofgren, D-Calif., speaks during the impeachment trial against President Donald Trump in the Senate at the U.S. Capitol in Washington, Wednesday, Jan. 22, 2020. (Senate Television via AP)As he continued his remarks, Schiff called Trump “the key player in the scheme” to pressure Ukraine for investigations that could benefit him politically in exchange for a White House meeting and the release of nearly $400 million of military aid. Both coveted items were of a “great consequence to Ukraine,” Schiff said, particularly the funding meant to help the small Eastern European nation guard itself from Russia.

“Everyone was in the loop,” Schiff said. “[Trump] directed the actions of his team. He personally asked a foreign government to investigate his opponent. These facts are not in dispute.”

Trump, who had wanted Ukraine to investigate the Bidens as well as a discredited theory that Ukraine worked with Democrats to interfere in the 2016 election, insists he has done nothing wrong and that a rough transcript of a July 25 call with Ukraine’s president, Volodymyr Zelensky, exonerates him of any wrongdoing.

But if the Senate does not hold Trump accountable, Schiff warned, “the damage to our democratic elections, to our national security, to our system of checks and balances will be long-lasting and potentially irreversible.”

Even on the first day of opening arguments, the seats of many Republican senators and a handful of Democrats were empty as Schiff wrapped up his remarks. Some members were standing against the back wall to stretch their legs, but others stayed out of the chamber for an extended period, even though the rules call for senators, like jurors at any trial, to be in their seats the entire time.

During breaks outside the Senate chamber, Republicans dismissed the proceedings and said they were learning nothing new as they kept up their attacks on the House managers, particularly Nadler.

When asked whether Trump’s attorneys had also deserved their admonishment by Roberts, Sen. John Cornyn (R-Tex.) responded, “No,” saying Nadler “is embarrassing.”

“And it’s outrageous,” Cornyn added. “At some point, you got to call it what it is.”

The heated rhetoric from some Democrats on Tuesday risked turning off a small slate of influential GOP senators in the center of the procedural fight over witnesses and documents.

“Well, I took it as very offensive,” Sen. Lisa Murkowski (R-Alaska) said of Nadler’s performance. “As one who is listening attentively and working hard to get to a fair process, I was offended.”

At a news conference in Davos, Trump said he “can live either way” with the Senate’s decision about whether to call witnesses at his impeachment trial, but he argued that testimony by former national security adviser John Bolton could pose national security and other concerns, including that Bolton left the administration on bad terms.

Democrats seized on another portion of Trump’s news conference, when he praised his legal team and added: “Honestly, we have all the material. They don’t have the material.”

Rep. Val Demings (D-Fla.), one of the House impeachment managers, said that comment provided more evidence of obstruction of Congress. But Jay Sekulow, one of Trump’s lawyers, responded by defending the president’s executive privilege rights.

“This isn’t nonsense,” Sekulow said. “This is really what the Constitution is about.”

Meanwhile, Trump said he would like to see an “acquittal fairly quickly” during a Fox Business Network interview in which he also called the Democrats pressing the case against him “totally nuts.”

But the White House set aside one avenue to end the proceedings quickly, at least for now, deciding against filing a motion Wednesday to dismiss the charges.

That does not preclude Trump’s lawyers from filing such a motion later, but Senate Republican leaders have warned that such a move would not have majority support from senators until fuller trial proceedings take place.