Skip to content
Home » U.S. Politics » Democrats Gear Up for ABC News Debate in Houston, with Front-Runners Set to Face Off
Previous Next

Democrats Gear Up for ABC News Debate in Houston, with Front-Runners Set to Face Off 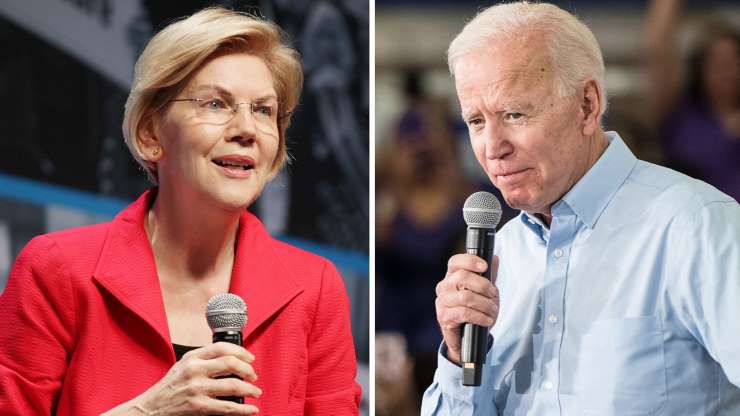 The winnowing presidential primary field is five months out from the first ballots being cast – but Democrats all vying for the top of the ticket are still carving out their own paths to defeat President Donald Trump.

Those differing routes are never more apparent than when standing shoulder-to-shoulder on a debate stage.

“You know, we have a president, as everybody has acknowledged here, every day is ripping at the social fabric of this country, but no one man has the capacity to rip that apart,” former Vice President Joe Biden said in his opening pitch at the second Democratic debate. “It’s too strong. We’re too good … Mr. President, this is America. And we are stronger and great because of this diversity, Mr. President, not in spite of it.”

“Our problems didn’t start with Donald Trump,” Massachusetts Sen. Elizabeth Warren told the crowd at the same debate one night prior, as she articulated her theme of striving for bold reforms. “Donald Trump is part of a corrupt, rigged system … We’re not going to solve the urgent problems that we face with small ideas and spinelessness. We’re going to solve them by being the Democratic party of big structural change.”

On Thursday, the 10 highest-polling candidates will appear for a single night of debate in Houston hosted by ABC News and Univision — the smallest roster yet in the third matchup of Democratic National Committee-sanctioned primary debates, with a field that still counts 20.

(MORE: Democrats target suburban voters in key battlegrounds ahead of 2020)

But as the former vice president relies on winning back the voters that propelled the first African-American president, Barack Obama, to the White House, liberals Sanders and Warren are running a different kind of race, seeking to forge their own coalition to capture the party’s presidential nomination.

Much like in 2008, the 2020 contest could see a state-by-state battle for the nomination — with each caucus and primary bringing a different front-runner and resetting the path to victory.

(MORE: What to watch for in ABC News’ Democratic presidential debate)

The divisions in the candidates’ strategies were made clear at the second debates in Detroit, when several Democrats took aim at Obama’s presidency — both directly and indirectly — and the very legacy Biden is running to extend.

Despite the former president being the party’s most popular member, the more liberal flanks and some lower-polling candidates forced Biden to fend off the attacks on his former boss, particularly on health care and immigration.

“Right now we have a dysfunctional health care system. Eighty-seven million uninsured or underinsured, 500,000 Americans every year going bankrupt because of medical bills, 30,000 people dying while the health care industry makes tens of billions of dollars in profit,” said Sanders, who along with Warren spent a large portion of their time vigorously defending Medicare for All.

“Medicare for All will fix that and that’s why I’ll fight for it,” said Warren about the legislation introduced by Sanders and seen by some as a more comprehensive replacement for Obama’s signature piece of legislation, the Affordable Care Act.

“The reality is that our plan will bring health care to all Americans under a Medicare for All system,” said California Sen. Kamala Harris, defending her plan which is more of a hybrid health insurance system that allows private companies to be able to offer health insurance plans within the Medicare system for consumers. “Your plan by contrast leaves out almost 10 million Americans,” she said of the Sanders.

On immigration, although the previous White House took steps to overhaul the immigration system — even using executive powers to protect Dreamers — several 2020 Democrats took aim at the three million deportations under the Obama presidency, leaving Biden as the sole navigator of those criticisms.

At one point, Booker interrupted the elder statesman: “You invoke President Obama more than anybody in this campaign. You can’t do it when it’s convenient and then dodge it when it’s not.”

“Mr. Vice President, it looks like one of us has learned the lessons of the past and one of us hasn’t,” said Castro, who served under Obama. “My immigration plan would also fix the broken legal immigration system because we do have a problem with that.”

Biden responded by calling out his fellow Democrats for unleashing friendly fire against Obama instead of railing against Trump.

“To compare him to Donald Trump, I think is absolutely bizarre,” Biden said at one point during the July debate.

South Bend, Ind., Mayor Pete Buttigieg echoed Biden’s sentiment to reporters in Las Vegas days after the debate, saying, “[I’m] a little puzzled that when we’re all running against President Trump, some folks felt the need to run against President Obama.”

Even the president saw the last debate as more of a disavowing of Obama than of himself.

At a rally in Cincinnati following the second round of debates, Trump called out his Democratic rivals for unleashing on his predecessor, telling the crowd, “The Democrats spent more time attacking Barack Obama than they did attacking me practically.”

Those who took aim at parts of Obama’s record — either by backing Medicare for All over Obamacare or by rejecting certain aspects of his immigration agenda — might run into a tougher road ahead as they seek to win back those voters who drifted from Democrats and turned to Trump.

Finding a lane in a still crowded primary

At this next debate, the contenders outside of the top tier — standing on the edge of the stage and in need of a breakthrough — will likely be trained on finding their lane by giving Democratic primary voters more than just a return to the pre-Trump era (like what Warren and Sanders are pitching), without alienating moderates or disapproving of the Obama legacy (which Biden is campaigning on).

For some in the field hoping to pick up voters that might stray from the 76-year old Biden, that middle ground oftentimes reflects a message of “generational change,” “unity” and rising above the divisiveness.

Buttigieg, who touts a refrain fueled with urgency, said over the weekend in New Hampshire, “None of us can afford to wait to act on our current problems, because they’re becoming a crisis … It’s not enough to think up a good policy. We have to unify Americans around these solutions or nothing will actually get done.”

Harris invokes her prosecutorial past and compelling backstory to appeal to a broad coalition — often telling voters as she did in the last debate, “I come from fighters … My sister Maya and I joke we grew up surrounded by a bunch of adults that marched about this thing called ‘justice.’ And I’m prepared to march with you, to fight with you for the best of who we are, and to successfully prosecute the case against four more years of Donald Trump.”

“I’m going to make sure the American people know about my strong, compelling vision for the future of our country. I believe that I can bring our country together, that we can reunite the old Obama coalition and then take that to the next level,” Castro, who frequently pushes for a fairer system to even the playing field, said in Beaufort, South Carolina last month.

Former Texas Congressman Beto O’Rourke, newly impassioned by a mass shooting in his native El Paso that killed 22 people last month, is on an unvarnished quest to fill the void in moral leadership he sees in the era of Trump.

“Though we’re connected to a president with no values and no morals, we’re also connected as a people by our ambitions and aspirations,” he told reporters over the weekend, later admitting that he might swear on the debate stage. “Democrats, Republicans, independents, before any of those things, we are Americans first and need to start treating each other like it.”

Minnesota Sen. Amy Klobuchar, who traded few barbs at the previous two debates while focusing on her roots in the Midwest — and her ability to work across the aisle — seeks to restore dignity to the presidency for “all of America.”

For entrepreneur Andrew Yang, who is carving out his own base in the shape of an eclectic cult-like following, the debate stage is an opportunity to attract a wide swath of voters, across the ideological spectrum, as his substantive campaign seeks to make the masses “think harder.”

“We automated away 4 million manufacturing jobs in Michigan, Ohio, Pennsylvania, Wisconsin. If those states sound familiar, those are all the swing states that Donald Trump needed to win and did win. So to me this was a straight automation story that immigrants are being scapegoated for economic problems they have little to nothing to do with … It’s not immigration, it’s automation,” he said in a recent interview with CBS This Morning.

In store this time around will be opportunities for the contenders to hash out differences that first drew sparks in the earlier rounds and across different stages.

But the main show will be at center stage, where Biden and Warren will face off side-by-side, as she continues to narrow the gap between them in recent polling. In an ABC News/Washington Post poll out this week, the former Harvard professor saw a six-point gain from June.

Biden argued at a campaign stop in Laconia, New Hampshire on Friday that sharing the stage “will be a good thing” because he says, “I’ve never had to break through.”

Warren, too, appeared to dismiss a potential clash with Biden, telling ABC News it does “not really” change her approach.

“The way I see this is, this is a chance to talk to people all across the country, about how we’ve got a government that works great for the wealthy and the well connected, just not working for everyone else. And we got a chance to change that in 2020,” she said.

While all eyes seem to be on the moderate vs. progressive showdown between the two, an advisor for Biden suggested that he will be ready to take on Warren’s “I have a plan for that” mantra — saying Biden’s plans were anything but middle of the road.

“I expect you’ll see Biden echo an important point he made during last week’s climate forum: We need more than plans, we need a president who can deliver progress on the most pressing issues facing Americans, which Joe Biden has proven he can throughout his career,” the official told ABC News.