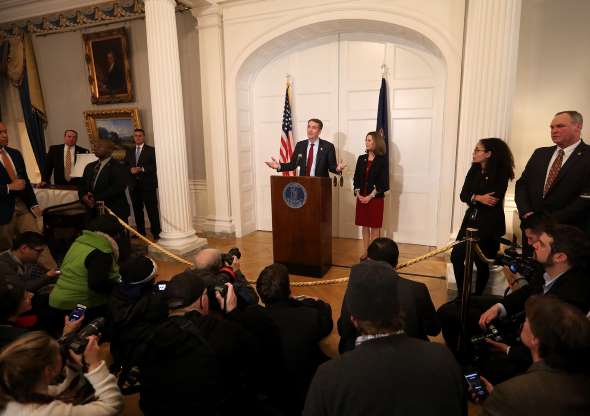 Only days ago, Democrats believed they had an obvious fix for a sudden political crisis after Virginia Gov. Ralph Northam was found to have a racist photo on his medical school yearbook page.

The solution came with moral clarity and easy resolve: Northam had to go.

Moral clarity has gotten a lot harder ever since.

First, the state’s popular lieutenant governor, Justin Fairfax, a promising young African-American politician who looked poised to pull the party out of its mess by moving into the governor’s office, became tainted by an allegation of sexual assault.

Then, on Wednesday, the state’s residents learned that Northam’s troubling history was not unique. The third Democrat in the line of succession, state Attorney General Mark Herring, confessed that he, like Northam, had once dressed in blackface.

Next in the state’s chain of succession is a Republican.

“It is like the plane is breaking up in midair for Democrats here,” said Quentin Kidd, a pollster and dean of the College of Social Sciences at Christopher Newport University in Newport News. “I suspect over the next few days, moral clarity will become a little less clear for Democrats. It starts to become relative when it threatens to essentially wipe out your party.”

Indeed, many of the top Democrats – including most of the party’s declared presidential candidates – who late last week demanded Northam’s resignation have gone silent at a time there are no longer any good options for exiting the crisis.

The collapse of Virginia’s political leadership is confronting the party – and the state – with tough questions about the standard to which it will hold elected officials as well as the legacy of racism in a place where many politicians came of age amid the fresh wounds of segregation.

The issues are especially fraught for Democrats, for whom the votes of African-Americans and women are crucial to winning elections, and for whom zero tolerance for racial or sexual misbehavior has become a rallying cry.

“I’m doing a lot of soul searching,” said Jaime Harrison, the former chair of the South Carolina Democratic Party. “We have to figure out some process by which we grade these things. There is so much historical and generational pain attached to these images.”

Republicans have tended to be more forgiving of party members – including President Donald Trump – who have said or done things deemed racist, sexist or insensitive. But even some in the GOP are rattled by the fast pace of revelations on the other side of the aisle.

“What we’re discovering is the deep roots that have not been dug up before, and once you see the light of day, it becomes disturbing,” said Sen. Tim Scott, R-S.C., the only black Republican in the Senate.

“I don’t know what people were thinking back in the day when it comes to blackface and costume choices – everybody lives in a glass house, but my goodness gracious, this is interesting.”

Virginia’s Democrats had been working for years to shed their roots in the era of good old boys and Confederate flags. Over the last decade, an alliance between old-timers and the huge influx of multiethnic out-of-staters who have settled in Virginia’s booming northern suburbs successfully turned the state from deep red to purple and then, in the last couple of elections, to a seemingly reliable blue.

Before this leadership crisis emerged, Democrats looked poised to cement their control over Richmond in legislative elections this fall. Yet those same shifting demographics – in Virginia and throughout the South – mean leaders can no longer easily sidestep past misbehavior.

“The very bright light that is shining on Virginia right now is sparking a painful but, I think we all hope, important conversation,” Herring wrote in a long, remorseful statement in which he revealed putting on blackface to attend a party dressed as a rap artist nearly 40 years ago. The incident haunted him “each time I took a step forward in public service, realizing that my goals and this memory could someday collide and cause pain for people I care about,” he wrote.

More such confessions could be coming. Larry Sabato, who runs the University of Virginia Center on Politics and graduated from the school in 1974, tweeted that he was embarrassed the Herring blackface incident happened at the university.

“And my guess is this wasn’t an isolated incident,” he added. “A certain element here has long thought blackface was amusing and acceptable.”

“There is a whole generation of white male politicians of this generation that have these kinds of things in their past,” said Kidd. “Theirs is a generation that came to a place of political prominence when we weren’t looking, or didn’t care to look for this stuff in the past. Now we do.”

The scandals that have rocked Virginia began suddenly last week when a conservative website published a photograph from Northam’s 1984 medical school yearbook showing two men standing next to each other, one dressed in a Ku Klux Klan robe, the other in blackface.

Northam apologized, but then, the next day, insisted that neither of the people in the picture was him and that he had no idea how the image got on his yearbook page. He had never bought a copy of the yearbook and had never seen the photo before, he said. But he admitted having worn blackface at least once, in a dance routine where he imitated Michael Jackson.

Democrats across the country – including all the major declared and potential 2020 presidential candidates – called for him to resign despite those protestations of innocence. Some saw the demands as an encouraging demonstration of the party’s commitment to addressing racism in its ranks.

Northam has refused to quit, and as the debate over his future has raged, the same conservative site, Big League Politics, published allegations that Fairfax had sexually assaulted a woman, Vanessa Tyson, during the Democratic National Convention in 2004. Fairfax denied the allegation, and said their intimate relations had been consensual.

Tyson described the encounter in detail in a statement released Wednesday in which she said he had forced her to engage in oral sex.

Some women began weighing in on Tyson’s side. The National Organization for Women issued a statement Wednesday calling for Fairfax’s resignation.

Rep. Jennifer Wexton, a freshman Democrat from Virginia, said on Twitter, “I believe Dr. Vanessa Tyson” – a statement much like the ones other Democrats made last fall during the confrontation between Christine Blasey Ford and Supreme Court nominee Brett M. Kavanaugh.

Sen. Cory Booker of New Jersey, one of two black candidates running for the Democratic presidential nomination, deflected initial queries about Fairfax but told CNN on Wednesday that the allegation was “deeply, deeply disturbing,” and he commended the accuser for coming forward.

“I have not read the allegations, but it takes tremendous courage for someone to come forward in the way that she did,” he said.

Herring would be next in line to be governor if both Northam and Fairfax were to step down, but his admission that he had donned blackface in his youth threw that into question.

The imbroglio could complicate an emerging element of Democrats’ strategy for challenging Trump and the GOP in 2020: They have wanted to draw a contrast between the parties by saying that they are willing to police their own ranks while Republicans have been willing to tolerate racism and sexism by officeholders.

Democrats point to Trump and Rep. Steve King of Iowa, who was stripped of committee assignments in January, but only after years of saying racially inflammatory things. By contrast, they note, when Sen. Al Franken faced allegations of sexual misconduct in 2017, leading Democrats quickly pushed him to resign.

“Being willing to hold a leader accountable creates a clear and bright line between Democrats and Republicans,” Rashad Robinson, president of Color Of Change, said after the Northam scandal broke.

That bright line may get blurry if Northam, Fairfax and Herring all remain in office under a cloud of scandal.