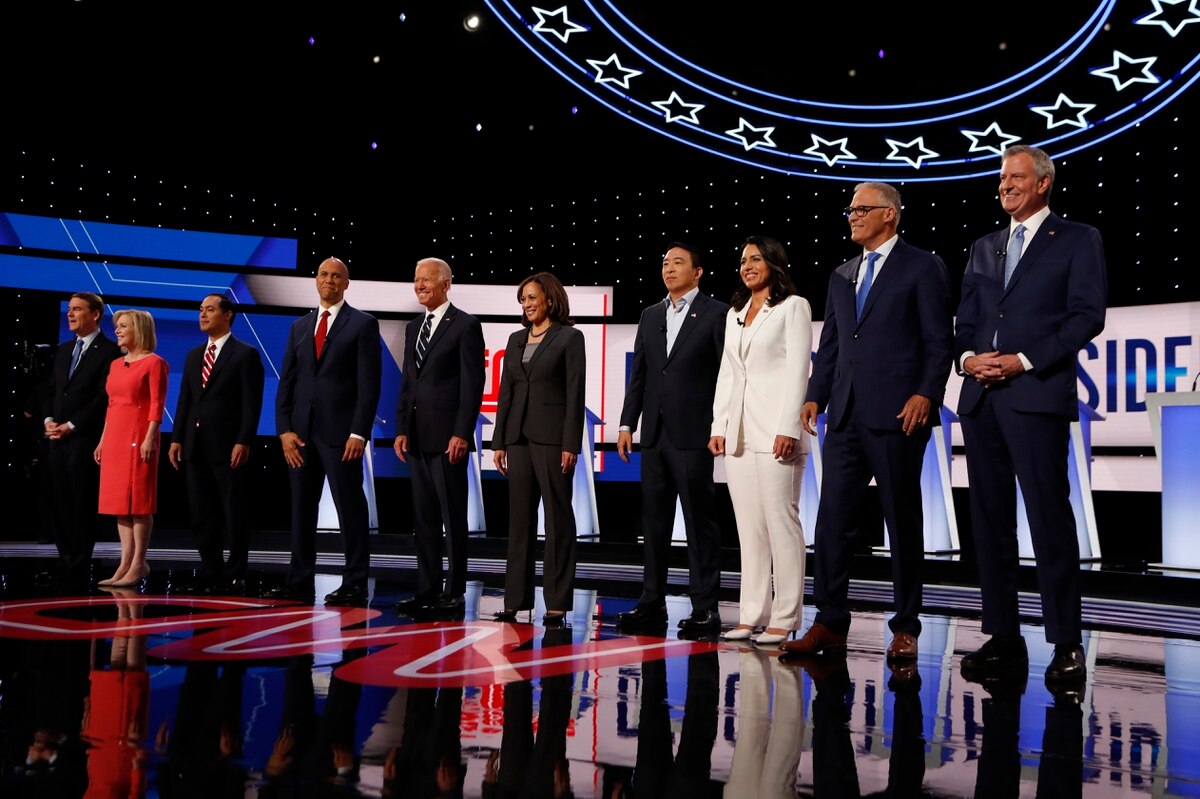 The 2020 presidential hopefuls saw their first significant foreign policy discussion this week during the two-night Democratic Party debate in Detroit, including questions about how long U.S. troops should remain in Afghanistan.

In-depth conversations on national security issues were absent from the first presidential debates — held in late June — despite numerous comments from the 20-plus declared Democratic candidates using their time on the campaign trail to attack President Donald Trump for his performance as commander in chief.

And while issues of health care policy and immigration reforms still dominated the second round of debates, moderators devoted a small portion of the nearly six hours of the two-part event to foreign military threats and current U.S. military operations.

Here’s what the candidates said:

Multiple candidates were asked if they would withdraw all U.S. forces from Afghanistan in their first-term in office, ending the nearly 18-year-old conflict. John Hickenlooper Jr., former governor of Colorado, was the only one who said he would keep a smaller peacekeeping force there than the current 14,000-personnel deployment.

“If we completely pull our troops out of there, you are going to see a humanitarian disaster,” he said. “We are going to have to be in Afghanistan. Look at the progress that has happened in that country. We are going to turn our backs and walk away from people that have risked their lives to help us and build a different future for Afghanistan and that part of the world?”

New Jersey Sen. Cory Booker offered a similar response, saying that setting an “artificial deadline” for any withdrawal could ”create a vacuum and the environment for terrorism.” But he did commit to bringing troops home “as quickly as possible.”

He also took a swipe at Trump for announcing military moves on social media, saying, “I will not do foreign policy by tweet.”

Others in the field said they believe U.S. involvement in Afghanistan must end immediately.

“We will withdraw. We have to,” said South Bend Mayor Pete Buttigieg, the only current presidential candidate to serve on the ground in Afghanistan (with the Naval Reserves).

“Around the world we will do whatever it takes to keep America safe. But I thought I was one of the last troops leaving Afghanistan (in 2014) … We’re pretty close to the day when we will wake up to the news of a casualty in Afghanistan who was not born on Sept. 11.”

He also promised a three-year sunset on any new authorization of military force, to prevent future open-ended military engagements overseas.

Hawaii Rep. Tulsi Gabbard, who served with the National Guard in Iraq, similarly said she would bring troops home “within my first year in office, because they shouldn’t have been there this long.”

Sen. Bernie Sanders, I-Vt., was asked why voters should believe his promises to keep America from being “policemen of the world,” a pledge which Trump also made and has found problematic to enforce.

“What we need is a foreign policy that focuses on diplomacy,” he said, citing the length of the war in Afghanistan. “Ending conflicts by people sitting at a table not by killing each other. I will go to the United Nations and not denigrate it, not attack the UN, but bring countries together … and solve those problems peacefully.”

Former Texas congressman Beto O’Rourke echoed that sentiment. “It is time to bring those service members back home from Afghanistan but also from Iraq, also from Yemen and Somalia and Libya and Syria. There is no reason for us to be at work all over the world tonight.”

Ryan blasted Trump for meeting with Kim, saying he gave the dictator “global credibility” without any real return for the United States.

“(Diplomacy) is long, tedious work,” he said. “Much of it done outside of the eye of the TV camera. And as president, you’ve got to monitor that and be very disciplined every day. Don’t go give a dictator a huge win. Sit down and do your job.”

But as she has said on the campaign trail, Klobuchar said she wants to leave open the option of meeting with any world leader, in hopes of avoiding military conflict.

Entrepreneur Andrew Yang said Wednesday he would work to de-escalate tensions with Iran, which he blamed on the Trump administration’s withdrawal from the Iran nuclear deal. He railed against Trump’s “erratic and unpredictable” conduct, even with allies.

Washington Gov. Jay Inslee similarly chastised Trump for “beating the drums of war” with Iran, saying the next commander in chief needs to be a more moderate, thoughtful negotiator.

Asked how he would handle the current situation in the Middle East, Inslee said there is “no primer” for a president, but noted he believes he made the right call when, as a member of Congress, he voted against the Iraq War.

Massachusetts Sen. Elizabeth Warren and Montana Gov. Steve Bullock squared off over their campaign trail comments regarding preemptive nuclear strikes. Warren said she is completely opposed to the idea.

“The United States is not going to use nuclear weapons preemptively and we need to say so to the entire world,” she said. “It reduces the likelihood that someone miscalculates, someone misunderstands.”

But Bullock said he doesn’t want to “take that off the table.” He said he wants a stronger focus on diplomacy over threats in U.S. foreign policy, “but drawing those lines in the sand at this point I would say no.”