Coronavirus Cases Surge as Trump Ramps up Aid For States 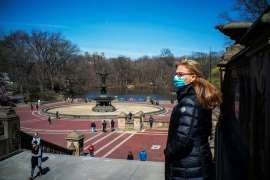 The number of confirmed novel coronavirus cases world-wide more than doubled in a week to nearly 330,000 on Sunday, as President Trump ramped up federal assistance to New York, California and Washington, the three states hardest hit by the outbreak in the U.S.

Mr. Trump announced the assistance at a White House press conference as U.S. lawmakers failed to reach a deal on Sunday on a potentially $1.3 trillion federal stimulus package to address the coronavirus emergency and the economic fallout. The sweeping legislation hit a stumbling block when Democrats blocked a procedural vote in the Senate.

Mr. Trump said he was optimistic a deal would still be reached after saying that he had ordered the Federal Emergency Management Agency to supply New York, California and Washington with thousands of hospital beds. The federal government would also provide the three states with hundreds of thousands of masks and surgical gowns, and deliver more respirators to them.

The president on Friday approved a major disaster declaration for New York, unlocking federal funding and assistance for the strained state. On Sunday he approved the same declaration for Washington and California.

“Our goal is to get relief to Americans as quickly as possible,” he said.

The governor of Hawaii announced a mandatory two-week self-quarantine for arrivals.

The number of confirmed cases in the U.S. surpassed 32,000 on Sunday, a 10-fold increase from a week earlier. The mounting infections came as state leaders ordered residents to stay home as much as possible, sought medical supplies and moved to expand hospital capacity to prepare for an influx of patients.

Among those who have tested positive for the disease is U.S. Sen. Rand Paul, his office said. The Kentucky lawmaker was in quarantine and asymptomatic, according to his office. He is the first senator and third member of Congress to be infected.

German Chancellor Angela Merkel was in self-isolation after receiving a vaccine on Friday from a doctor who tested positive for the virus, a government spokesman said. She will be tested regularly in coming days.

New York state has emerged as the center of the crisis in the U.S., with 15,777 confirmed cases reported Sunday—about 4,000 infections more than a day earlier and thousands more than any other U.S. state.

New York Gov. Andrew Cuomo asked the federal government to nationalize the acquisition of ventilators and other medical supplies as states compete with each other for a scarcity of resources, leading to price gouging.

“This is just an impossible situation to manage,” Mr. Cuomo said at a briefing. “If we don’t get the equipment, we can lose lives that we could’ve otherwise saved if we had the right equipment.”

Mr. Cuomo said the state was moving to expand hospital capacity, ordering the U.S. Army Corps of Engineers to erect four temporary hospitals in facilities in Long Island, Westchester County and Manhattan. Hospitals in New York City have already felt the strain of the rising number of patients, with equipment shortages forcing doctors to wear the same masks for as long as weeks and emergency-room physicians to reuse gowns.

Mr. Cuomo said he asked New York City officials to create a plan within 24 hours to reduce the density of crowds in city parks, where residents have gathered despite social-distancing orders. There were at least 8,000 confirmed infections and 60 deaths in New York City alone—comprising close to a third of all cases in the country, Mayor Bill de Blasio said on CNN.

“This has only just begun,” said Mr. de Blasio, who warned the pandemic may stretch into the coming months. “The worst is yet to come.”

States around the country were increasing efforts to acquire essential equipment for doctors and health-care employees, while also tightening restrictions on people’s movement.

New Jersey Gov. Phil Murphy said the state needs more personal protective equipment in an interview on ABC on Sunday morning, and Washington Gov. Jay Inslee said his staff stepped in to give N95 masks sold at a Target in Seattle to health-care workers.

California Gov. Gavin Newsom, who ordered the state’s nearly 40 million residents to stay at home as much as possible last Thursday, said Apple Inc. CEO Tim Cook would provide 1 million medical masks to the state specifically. The state was also working on other efforts to acquire more supplies, he said.

Meanwhile, Louisiana Gov. John Bel Edwards issued a stay-at-home order to all residents, as the number of confirmed cases in the state topped 800. The order, which takes effect Monday afternoon, allows people to leave their homes for essential tasks like getting groceries and for exercise.

Pennsylvania also prepared to enforce the closure of nonessential businesses as state police said they would begin to assist these efforts Monday morning.

The number of deaths world-wide from Covid-19, the disease caused by the virus, surpassed 14,376 as of Sunday, according to data compiled by Johns Hopkins University.

Italy on Sunday reported 651 deaths. The day before, the country had recorded the world’s highest one-day death toll, with 793 fatalities, prompting the government to tighten a nationwide lockdown. Italy, which has reported more total deaths than China, shut down all industrial production deemed nonessential and many private and public offices were ordered closed.

The blistering speed of the virus’s spread shows the challenge confronting policy makers, many of whom are implementing more drastic containment efforts at huge costs to their economies.

Each new case appears to be causing about three new infections, said Dale Fisher, an infectious-disease expert at the National University of Singapore.

“The whole world knew this was coming and some countries prepared,” said Mr. Fisher, while the rest “clearly weren’t ready.”

The number of deaths reported in Iran rose 129 over the previous 24 hours to a total of 1,685, the highest in the world after Italy and China.

Ayatollah Ali Khamenei, Iran’s supreme leader, belittled a U.S. offer to help his country fight the coronavirus, calling it “strange.” In a televised speech, he cited an unfounded conspiracy theory that the U.S. had created the virus.

Syria, with no reported coronavirus cases but vulnerable to infection because of its close ties with Iran, took its first significant steps against the pandemic, closing government offices, markets and commercial activities, according to the state news agency.

Lebanon expanded its lockdown as the military set up checkpoints, patrolled streets and sent helicopters over the capital, Beirut, directing people to stay inside. The government threatened to arrest anyone who disobeys.

Singapore said it would no longer allow short-term visitors to enter or transit through the country, saying it needs to conserve resources to focus on Singaporeans. The new measure shows the growing concern gripping many Asian countries of importing fresh cases from travelers as the infection spreads rapidly in Europe and North America.

Across the city, many stores and restaurants were more aggressively encouraging social distancing, marking red Xs on dining chairs and placing lengths of tape to space out checkout lines. Singapore had 432 confirmed cases as of Sunday.

Meanwhile in Hong Kong, where confirmed cases jumped by 44 on Sunday to 317, officials ordered civil servants to work from home again and postponed university entrance exams. The city recently imposed a 14-day mandatory quarantine on all visitors as a second wave of infections is being fueled by people flying into the city.

Questions about whether Japan could continue with the 2020 Olympic Games continued to mount, with the U.S. track and field federation becoming the latest American sports organization to push for a delay to the games.

The International Olympic Committee said Sunday it would make a decision about a possible postponement of the event over the next four weeks. The IOC emphasized, however, that a complete cancellation is “not on the agenda.”

In Australia, bars, nightclubs, casinos, movie theaters and places of worship are to close at noon on Monday. The government said schools should stay open until the end of the first term, which varies between one and three weeks away depending on the state.

Afghanistan’s health ministry said 10 people, including two foreign diplomats, had tested positive for the coronavirus in Kabul, the capital. It didn’t identify the diplomats or their countries. The U.S. Embassy urged U.S. citizens to leave Afghanistan on commercial flights immediately, saying it couldn’t provide medical care or evacuation.

Egypt suspended mass prayers as the country recorded 294 confirmed cases of coronavirus infection and 10 deaths Saturday. The government halted all commercial flights into and out of the country but allowed foreign airlines to evacuate stranded tourists.

Health officials in the Gaza Strip said two Palestinians who had traveled to Pakistan tested positive for the coronavirus, the first cases reported in the Palestinian territory. The two were quarantined at a field hospital near the Egyptian border upon their return Thursday.

Hamas, which governs the densely populated strip of two million people, responded by ordering the closure of weekly outdoor markets, wedding halls and cafes and canceling Friday prayers. Health officials said Gaza is at risk of a spreading infection because of a weak health-care system and poor sanitation. Israel and Egypt imposed a blockade on Gaza in 2007 when Hamas took control.

Hungary’s Prime Minister Viktor Orban asked the parliament to vote Monday on a measure that would extend the country’s state of emergency until his government declares the medical crisis over. The current emergency, which parliament has authority to renew, gives Mr. Orban power to rule by decree. The new measure calls for prison terms of up to five years for journalists convicted of spreading information the state deems false and harmful to its efforts to fight the coronavirus.