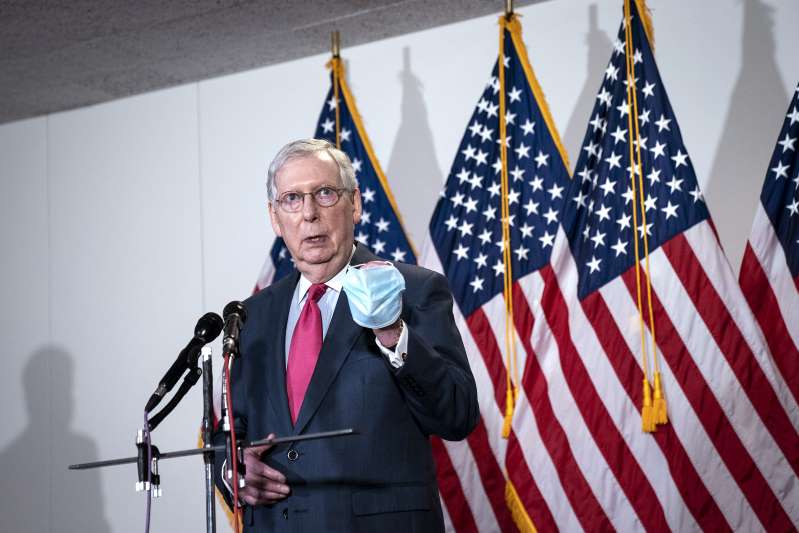 Congress is moving toward another round of coronavirus relief as jittery Republican senators demand action and the Trump administration says more legislation is likely to be needed, with unemployment soaring and the U.S. death toll approaching 100,000.

Lawmakers are far from a deal, but the battle lines are emerging in what is likely to be the most contentious negotiations yet after trillions of dollars have already been spent to ease the economic and public health devastation wrought by COVID-19.

In the House, Democrats last week passed the $3 trillion HEROES Act, which includes state and local aid, another round of $1,200 direct payments, pay raises for front-line workers, an extension until January of the $600-per-week unemployment compensation and a raft of other measures that Republicans have derided as a “liberal wish list” unrelated to the suffering of Americans because of the pandemic.

President Donald Trump has dismissed the bill as “dead on arrival.” Senate Majority Leader Mitch McConnell, R-Ky., has replaced his suggestion to let cash-squeezed states go bankrupt with a call for a “pause” in new relief funding.

The Senate left town for a 10-day recess Thursday without taking up any coronavirus relief legislation, but while McConnell is urging patience, he hasn’t shut the door to another bill, indicating that discussions could begin next month.

“If we do another bill, it won’t look anything like the House Democrats’ bill,” McConnell told House Republicans in a teleconference Wednesday.

Full coverage of the coronavirus outbreak

McConnell said he won’t support extending the temporary unemployment insurance benefit of an additional $600 per week, and he said the bill must protect employers from lawsuits, calling trial lawyers “vultures” and insisting that liability protection is his red line.

While McConnell’s office hasn’t been specific about what liability protections would look like, the U.S. Chamber of Commerce is pushing for protection from claims that a client, a customer or an employee contracted COVID-19 in a business. The chamber also wants to ensure that health care providers and companies that make protective gear are protected from COVID-19-related lawsuits.

Still, some Republican senators in tough re-election battles are growing impatient as they face pressure at home for action.

“Given the crisis that we face, I think it would be far more productive if the leaders in both the House and the Senate put away partisan wish lists and seriously began to negotiate a package,” said Sen. Susan Collins, R-Maine, who wants up to $500 billion in aid for states.

Some Republicans from the hardest-hit states are joining blue state colleagues in urging more relief: Sen. Bill Cassidy, R-La., is pushing for aid to states, while Sen. Rob Portman, R-Ohio, is proposing that people who return to work should get federally funded bonuses.

‘Strong likelihood we will need another bill’

A stunning 38.6 million Americans have applied for first-time unemployment insurance during the pandemic, and the $600-per-week boost in benefits in the CARES Act expires at the end of July.

Treasury Secretary Steven Mnuchin said Thursday that as states feel the strain of plummeting revenue due to mass lockdowns, “there is a strong likelihood we will need another bill.”

“But we just have $3 trillion we’re pumping into the economy, and we’re going to step back for a few weeks and think very clearly how we need to spend more money and if we need to do that,” he said at a virtual summit hosted by The Hill.

House Speaker Nancy Pelosi, D-Calif., has gone on a media blitz to pressure Republicans to act. “Instead of telling laid-off workers to pause,” she said Thursday, “Leader McConnell and the Senate GOP need to come to the negotiating table to help deliver the relief to protect lives and livelihoods.”

Her office circulated two polls this week: One by Quinnipiac University, which showed that Americans believe by a 2-to-1 ratio that Congress should pass another COVID-19 economic stimulus bill, and another by a Democratic firm, which found similar 2-to-1 public support for the House legislation.

Senate Minority Leader Chuck Schumer, D-N.Y., who has endorsed the HEROES Act, accused Republicans of sitting on their hands: “The House has passed a major bill dealing with COVID. We have done nothing on this floor to vote on anything about COVID.”

There is bipartisan support for making technical changes in the Paycheck Protection Program to give small businesses more flexibility in spending their loans.

While economic relief measures will feature heavily in the talks, the fate of proposed changes in election procedures in the HEROES Act is uncertain. The bill, which would provide $3.6 billion to states, includes federal requirements such as allowing every eligible American to vote by mail. Republicans strongly oppose national rules, and Trump has blasted the provisions with unfounded claims about fraud.

Experts say that states are dangerously unprepared for the presidential contest and that failure to send them additional funding could lead to chaos and errors that would threaten the integrity of the election.

Other provisions in the Democratic bill will be a tough sell for Republicans, such as direct payments to those who file taxes with tax identification numbers, a group that includes people in the U.S. illegally and some who are present lawfully.

Pelosi said Sunday that she has “no red lines” other than to save lives and protect workers, especially those on the front lines serving essential functions.

Two senior Democratic aides said party leaders wouldn’t negotiate with themselves until Republicans make some sort of counteroffer. One of the aides said “cracks” are emerging in the Republican resistance to additional measures.

The second aide said: “The ball is in their court.”