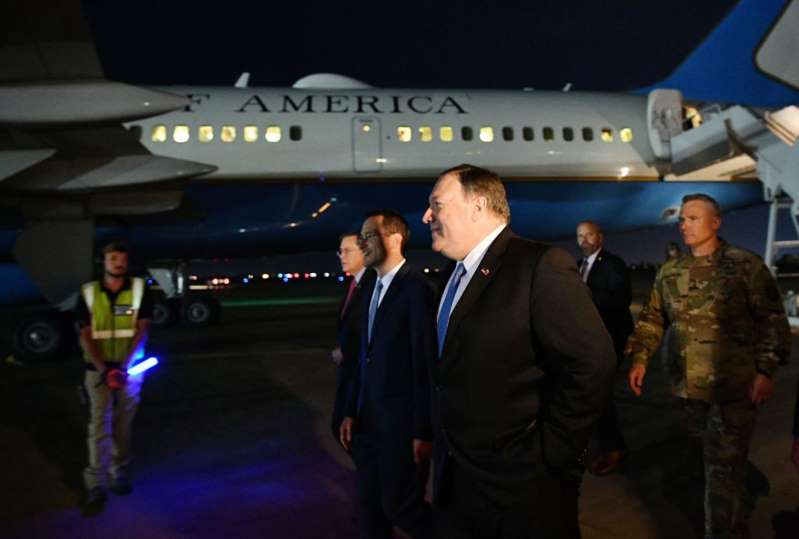 The State Department ordered several hundred U.S. diplomatic personnel to leave Iraq on Wednesday, citing heightened threats from neighboring Iran amid a buildup of U.S. military forces in the volatile region and growing concerns of a potential conflict with Tehran.

The uptick in tensions came nearly two weeks after the White House warned of what it described as potential targeting of U.S. forces, allies and interests by Iranian security forces or their proxies. It provided no details and some military allies and senior members of Congress questioned the administration’s assessments.

So far this month, the Pentagon has sent the Abraham Lincoln carrier task force and Air Force B-52 bombers to the region and dusted off contingency war plans, the Treasury Department has increased sanctions on Iran’s economy, and Secretary of State Michael R. Pompeo made a sudden trip to Baghdad to consult with U.S. and Iraqi officials.

Few allies embraced the aggressive U.S. moves and several warned of an accidental clash in Iraq, where U.S. military forces and Iranian-backed militias operate in close proximity, or in the Persian Gulf, where Iranian and U.S. ships sometimes sail at close quarters.

Iran’s leaders sought to ease concerns, saying the Trump administration’s actions and rhetoric were psychological warfare intended to rattle the regime as it pushed back against growing U.S. pressure.

“Neither they, nor we, want war,” Supreme Leader Ayatollah Ali Khamenei said on Iranian TV at an iftar dinner breaking the Ramadan fast in Tehran late Tuesday.

Trump expressed optimism about his efforts to force Iran back to the negotiating table a year after he unilaterally withdrew from the 2015 nuclear disarmament deal and began re-imposing U.S. sanctions on Iran’s oil, metals, banking and other core sectors of the economy.

“I’m sure that Iran will want to talk soon,” he tweeted Wednesday.

Iran has shown no sign of bending, and has appealed for support from other signatories to the nuclear deal to allow it to continue exporting oil, a crucial source of foreign revenue, after the Trump administration threatened to impose sanctions on countries or companies that import Iranian oil.

Iranian President Hassan Rouhani last week said Tehran would stop complying with parts of the 2015 nuclear deal by stockpiling low-enriched uranium, rather than shipping the surplus out of the country, but the moves did not put Iran on the path to a nuclear weapon.

The State Department ordered nonessential personnel to leave the country from the U.S. Embassy compound in Baghdad and a U.S. Consulate in Irbil in the Kurdish region of northern Iraq. The order affected about 30% of the staff, or several hundred people in all. U.S. diplomats are not allowed to bring families to Iraq because of security concerns.

Germany and the Netherlands put out statements saying their embassies remained open, although both temporarily suspended military training programs in Iraq.

Pompeo met with European counterparts in Brussels on Monday in an effort to rally more support for what the White House calls its “maximum pressure” campaign against Iran.

“We fundamentally do not seek a war with Iran,” Pompeo said later. “If American interests are attacked, we will most certainly respond in an appropriate fashion.”

Allied doubts were evident Tuesday when a senior British military officer, speaking to Pentagon reporters via a teleconference in Baghdad, seemed to contradict the U.S. warnings.

“There are a substantial number of militia groups in Iraq and Syria, and we don’t see any increased threat from any of them at this stage,” Maj. Gen. Chris Ghika, deputy commander of the Iraq-based coalition fighting the Islamic State militant group, told reporters.

On Wednesday, the British Ministry of Defense sought to paper over the dispute by noting that Ghika spoke only of the area where he operates, Iraq and Syria.

Though there is broad bipartisan antagonism toward Iran in Congress, several Republican lawmakers questioned whether the White House was overreacting to Iranian threats that have long existed in the region.

“I have no idea what the threat stream is beyond what I read in the paper,” Graham told reporters Wednesday. “And I think there’re a lot of people in my shoes that are going to support standing up to Iran but we need to understand what we’re doing.”

Sen. Mitt Romney, R-Utah, who sometimes has clashed with Trump, said it was “close to inconceivable” that Trump would consider going to war with Iran.

“The president made it clear when he ran for president that one of the worst foreign policy mistakes in American history was the decision to go to war with Iraq,” Romney said.

Veteran diplomats and foreign policy experts also questioned the strategy, and the role of Trump’s national security adviser, John Bolton, who long advocated regime change in Tehran before he joined the White House.

Richard Haass, president of the nonpartisan Council on Foreign Relations, cautioned against thinking that a U.S. war with Iran would be relatively easy, as Bolton once suggested.

“Would not be quick, easy, or confined to Iranian territory,” he tweeted. “Iran could take war to much of region and even globally with cyber, militias, etc. Oil prices would spike. And rather than weaken regime war could bolster it.”

As tensions rose this week, several Saudi oil tankers off the United Arab Emirates and pumping stations along a major pipeline in Saudi Arabia sustained damage in still-unexplained explosions.

Floating mines reportedly caused the oil tanker explosions, although the source was not clear. Saudi officials blamed the pipeline attack on drone aircraft flown by Iran-backed Houthi rebels who are fighting a Saudi-led coalition in Yemen, and struck back with more than a dozen airstrikes against rebel positions in Yemen.