Skip to content
Home » U.S. Politics » Biden urges a new economic relief package and warns again of a ‘dark winter’ ahead
Previous Next 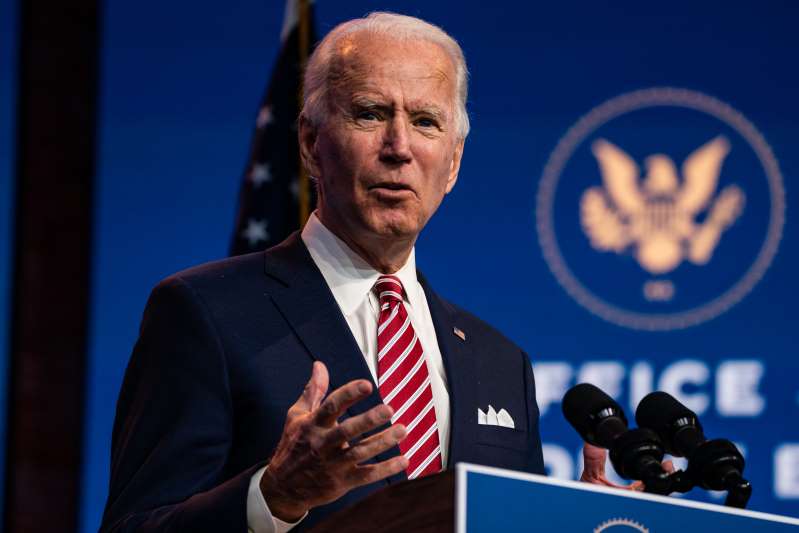 President-elect Joe Biden urged Congress to immediately pass an economic relief package Monday as he warned that the coronavirus pandemic will worsen in the coming months.

President-elect Joe Biden urged Congress to immediately pass an economic relief package Monday as he warned that the coronavirus pandemic will worsen in the coming months.

The delay in cooperation is setting back plans for a coordinated rollout of a coronavirus vaccine, Biden said. Most of that rollout would fall to the Biden administration next year, but the Trump White House is not sharing details of its distribution plan.

Trump falsely claims that he won the Nov. 3 election and is holding up the normal transition process for a new president.

“I interpret that as Trumpianism,” Biden said. “No change in his modus operandi.”

Federal help can ease the pain for workers and employers as the virus surges across the country, Biden said as he and Vice President-elect Kamala D. Harris expressed optimism that businesses and labor unions are ready to work together to reboot the economy.

The holdup is Congress, Biden said, as he criticized Democrats along with Republicans for inaction this fall.

Biden called on Congress to pass a large package approved by House Democrats earlier this year and said they cannot wait any longer to act.

“Refusal of Democrats, Republicans to cooperate with one another is not due to some mysterious force beyond our control. It’s a conscious decision. It’s a choice that we make. If we can decide not to cooperate, we could decide to cooperate.”

As he has before, Biden warned of a “dark winter” ahead as the pandemic continues to spread.

“Things are going to get much tougher before they get easier,” Biden said. He suggested that the economic relief needs to be approved during the lame-duck session of Congress while Trump is still in the White House.

Separately, Biden said he and his family, like many Americans, are rethinking their Thanksgiving plans because of the pandemic. He endorsed public health advice to limit gatherings to 10 people or fewer.

The speech followed one last week on Biden’s approach to tackling the virus, which has killed at least 246,000 Americans. The pandemic that took hold in March continues to widen, and its toll on Americans’ lives and livelihoods hangs over Biden as he plans to assume the presidency in January.

Repairing the economy is entwined with an effective response to the pandemic, Harris said in brief remarks ahead of Biden’s address.

“Now is when the real work begins,” Harris said. “The necessary work, the good work, of getting this virus under control, saving lives and beating this pandemic and opening the economy responsibly while rebuilding it,” she said.

“To state the obvious, we seem to be turning a pretty dark corner now,” Biden told the gathering while reporters were present.

As a candidate, Biden claimed that his economic plan would restore the jobs lost this year as businesses shut down or scaled back because of the pandemic and then create 5 million new jobs.

Biden’s speech comes amid deepening worries about the national economy suffering from a nationwide surge in coronavirus cases and new restrictions on dining and other economic activities.

When the United States was first hit with a wave of coronavirus cases, Congress quickly acted on a bipartisan basis to approve more than $2 trillion in emergency aid for laid-off workers, distressed businesses and other sectors of the economy.

With most of that aid expired, Americans may be facing a new wave of lockdowns — this time without federal assistance.

Lawmakers had expressed hope that at least a partial coronavirus relief package could be coupled with an extension in funding for the federal government, which is necessary to avoid a Dec. 11 shutdown. But senior congressional officials have grown increasingly pessimistic that can be achieved in the lame-duck period, according to multiple congressional aides and outside economic advisers.

House Speaker Nancy Pelosi (D-Calif.) and Senate Majority Leader Mitch McConnell (R-Ky.) have not talked recently about covid negotiations, according to a spokesman for Pelosi.

“President-elect Biden has been emphatic about the urgency of enacting a relief package as soon as possible, including in the lame-duck, to meet the needs of working families, small businesses, state and local governments, and virus control,” said Jared Bernstein, an outside economic adviser to Biden.

Biden spoke to Pelosi and Senate Minority Leader Charles E. Schumer (D-N.Y.) on Friday about the need for a stimulus package, said Ron Klain, the incoming chief of staff for the president-elect. Biden has not spoken to McConnell, Klain said.

“We need action during the lame-duck. There are a lot of things that are going to have to wait until Joe Biden is president,” Klain said Sunday on NBC News’s “Meet the Press.” “This is not one of them.”

Trump had pushed aggressively for a deal before the election, but the White House is now expected to take a back seat in negotiations and not offer new stimulus proposals, according to one person who spoke on the condition of anonymity to discuss internal administration planning.

The president campaigned on a promise to rebuild what he frequently calls the best economy the country had ever experienced, while blaming the “China virus” for ruining it earlier this year. He has pushed for an end to restrictions on businesses and travel and the reopening of schools, despite the surge, while promising that a vaccine and better treatment are imminent.

Biden has not yet pushed Pelosi to take the $500 billion spending plan put forth by McConnell, although Federal Reserve Chair Jerome H. Powell has warned that failure to approve more aid could threaten the economic recovery. Powell has not endorsed a specific congressional plan.

“Congressional staff seems to be very gloomy. As of today, spirits are dampened,” said Bill Hoagland, senior vice president at the Bipartisan Policy Center and former Republican staff director for the Senate Budget Committee. “There does not appear to be any movement on either side.”

Congress will face a series of deadlines that could deepen Americans’ economic pain if unaddressed. Unemployment benefits for millions are set to expire, as are protections for renters and student borrowers amid mounting signs Americans are struggling to pay their utility bills and rent.

“It’s a mess,” said Doug Holtz-Eakin, former director of the Congressional Budget Office who served as an adviser to the late senator John McCain (R-Ariz.). “People will be evicted, people will not eat, people will have problems. Even if you don’t get a double-dip recession, you have to worry about the 11 million people out of work since April.”

Biden’s plan would include $400 billion in federal spending over four years on materials and services made in the United States, as well as $300 billion on U.S.-based research and development involving electric cars, artificial intelligence and similar technologies.

He also advocated a 100-day “supply chain review” that could require federal agencies to buy only medical supplies and other goods manufactured in the United States. And he urged an end to loopholes that let procurement officers and federal contractors get around existing “Buy American” clauses.