Biden Humiliated on the World Stage 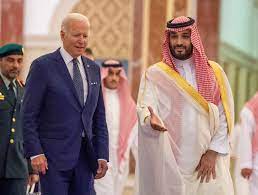 With energy prices surging President Biden traveled to Saudi Arabia in an effort to convince the Kingdom to increase oil production in an effort to reduce the prices of gas Americans feel when they fill up, unfortunately all he received was humiliation on the world stage.

This entire Middle East trip by the President was one enormous humiliation on the international stage that showed to the world how hapless and ineffective Biden is, with our allies nervous and our adversaries salivating at a weakened America.

This was a far cry from what then candidate Joe Biden portrayed to the nation that he would stand up to China, he is the only one who has gone toe to toe with Russian President Vladimir Putin, and he once stated that if president he would make Saudi Arabia a “pariah” nation after the killing of journalist Jamal Khashoggi in 2018.

None of this happened!

Biden placed himself in a very untenable position, first he campaigned on ending U.S. energy independence that was made possible by the presidency of Donald Trump, with the Democratic Party’s rigid stance of eliminating fossil fuel as America’s primary energy source in favor of alternative energy placed America’s national security in jepordy.

Throughout 2021 the price of energy has risen impacting what Americans pay at the pump, and twice at the end of last year, Biden released oil from the Strategic Petroleum Reserve, and again in March in an effort to bring down gas prices all to no avail.

Biden continues to blame Russia’s invasion of Ukraine for inflation and gas prices but all this was happening before the war even began.

The president was forced to ask Saudi Arabia, and OPEC to increase energy production to reduce gas prices, unfortunately these nations are already at max capacity, and can’t or won’t do more.

Two weeks ago, at the G-7/NATO summit French President Emmanuel Macron informed US President Joe Biden that OPEC’s two leading oil exporters are already pumping almost as much oil as they can, but either he didn’t listen or Biden and his national security advisors thought they knew better.

Feeling the pain at home with cratering poll numbers, and having wrecked America’s energy independence, Biden had to be seen doing something so off to Saudi Arabia he went hoping that the Kingdom, OPEC and the Gulf States would rescue him.

Unfortunately, for Biden and his entire national security team ignored the reality on the ground.

As President Biden began his travels through the Middle East, he was caught in a bind with his progressive allies who hold upright contempt for Israel, with a laser focus on human-rights with strong support for the Palestinians against the hard realities of what is in America’s long term national security interests.

The Democratic Party progressive elites want the U.S. to also end U.S. commitments and engagement with the Gulf States, and revive the Iran nuclear deal. The Biden is still trying to re-negotiate the Iran nuclear deal with China, France, Germany, Russia, and the United Kingdom, by giving Tehran billions in revenue as part of resumption of the agreement.

Why would the U.S. give Iran billions in revenue to Iran with no inspections of their facilities and where they are in the process of selling Russia drones to be used in the war in Ukraine, plus why is Moscow playing the role of mediator for the U.S.?

The one topic Biden was pressed on did he bring up Khashoggi to Crown Prince Mohammed bin Salman? Biden stated he did, but there seems to be confusion as the Saudi Arabia’s foreign minister seems to amply with a different narrative.  This would be pattern for Biden who stated while campaigning he would press Chinese President Xi Jinping on the origins of the coronavirus and would force a medical team to find out the true origins; he never did!

What is the true story, and this was leaked by the kingdom’s foreign ministry as soon as President Biden departed the country, further humiliating the president.

The one image no one is focusing on is the look on President Biden and his entire national security team as Saudi Arabia stated that they would not increase energy production beyond incremental levels left a look of utter defeat, leaving the United States humiliated before the entire world to see.

A sad day for America, which will only embolden our adversaries!