America needs an Open Discussion on Income and Racial Inequality 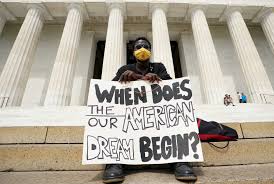 The brutal killing of George Floyd by a Minneapolis police officer has opened a deep seated wound centered on income and racial inequality.  Since this horrific event America has been polarized over race and for any meaningful discussion the U.S. needs an open dialogue, one that looks at all issues, not just police misconduct.

Could this even take place in this highly charged political environment?

What has to take place is not to look at one side in racial terms.  All Americans across the political spectrum were horrified and disgusted at the conduct of Minneapolis Police Officer Derek Chauvin resulting in the death of George Floyd.  Equally disturbing was why the other officers failed to intervene.

Since that horrific incident many of our political leaders and the media around the country have painted only one side as racists; the Republican Party and its supporters.  The focus has been squarely on police brutality, income and racial inequality which many in the black and Hispanic communities face on a daily basis.

This is a discussion worth having and the nation needs to have.  If America is to address income and racial inequality faced by the black and Hispanic communities, you have to openly examine the other fundamental problems systematic to these communities.  Right now many are openly voicing highly charged inflammatory politically slogans that that do nothing, except exacerbate an already tense situation that does nothing to solve core issues prevalent in the black and Hispanic communities.

As protests and riots erupt across America’s cities no media coverage has shed any light on how urban cities are run, considering the vast majority are governed by progressive Democrats.

Former civil rights activist, and former head of the National Urban League Department of Criminal Justice, Bob Woodson, who is now President of the Woodson Center stated, “In the past 50 years, $22 trillion has been spent on poverty programs.  Seventy percent goes not to the poor but those who serve poor people,” he said. “So many of those people taking office use this money to create a class of people who are running these cities, and now after 50 years of liberal Democrats running the inner cities, where we have all of these inequities that we have, race is being used as a ruse, as a means of deflecting attention away from critical questions such as why are poor blacks failing in systems run by their own people?”

Woodson continued, “It’s more class than it is race … and now race is being used to deflect attention away from the failures of people running those institutions,” he added. “The question is why are black kids failing in school systems run by their own people?”

In 2015, the city of Baltimore experienced a major riot similar to the situation in Minneapolis, like Minneapolis Baltimore has singular party control.  Recent corruption scandals by top elected officials in the city from which they pled guilty, with the real tragedy were perpetrated by members of their own community.

Why has this not been addressed, when black and Hispanic citizens in Baltimore face failing schools, depressed neighborhoods, devoid of any economic viability, all the while receiving over $1.1 billion in federal grants and assistance over a three year period!  Has anyone asked how this revenue was spent?

If you looked at all the cities that have erupted in protest and violence all are run by progressive Democrats and have been on average for the past 60-70 years.

Many of these cities after the “Great Society” poverty programs of the 1960’s led many blacks who obtained middle class status to flee to the suburbs avoiding urban decay.  What was left was rampant poverty, high crime rates and failing schools.

Having been raised in a family with a father who only obtained an elementary education in another country, he wanted better for his children and moved his family so they could receive a better education.

In a recent article I wrote in June, which research has shown that many of these states and cities have over 70% black and Hispanic students who can’t do English or math to grade level.  This equates to 7 out of 10 being deficient in basic educational requirements.

Even the epicenter which the protest and riots began, Minnesota has a dismal record of black and Hispanic academic achievement with 70% deficient in educational skills.

The city of Baltimore ranks as one of the highest spenders for school spending per-student in the U.S. placing third among the 100 biggest school systems during fiscal year 2017.  Accordance to the 2015 National Assessment of Educational Progress, only 18 percent of black fourth-graders are proficient in reading and 19 percent in math.  Here in Baltimore City, which maintains one of the country’s highest per-pupil spending levels, there are six schools that do not have any students who are testing proficient in either reading or math.

Many advocates of public education claim more funding will solve this problem but the situation in Baltimore hasn’t fixed the educational achievement gap it made it only worse.

Where is the media coverage on this major issue affecting black and Hispanic students?

Last month the California University system board of regents decided to scrap the use of the SAT and ACT for college admission examinations, because in their estimation it discriminates against blacks and Hispanic students.

Maybe if black and Hispanic student aren’t forced to attend failing elementary and secondary schools they would score better on college entrance examinations.  70% of black and Hispanic students in California fail to achieve componence in Math and English, so when they enter high school they already are at a sever disadvantage.  Could this be the reason they fare poorly on college entrance examinations.

President Obama a strong advocate for public schools enrolled his children in private schools.  Obama’s first Chief of Staff Rahm Emanuel while serving as mayor of Chicago from 2011 to 2019, but early in his first term the city endured a two week long teacher strike that greatly impacted black and Hispanic children.  Emanuel’s children were unaffected as his children attend the same prestigious private school Obama’s children had been enrolled in.

During the 2020 Democratic presidential primary Massachusetts Democratic Senator Elizabeth Warren advocated strong support for public schools but heavily regulating charter schools if not advocating for an outright ban.  We later learned that Warren had indeed sent her children to a private school, but denies that opportunity to black and Hispanic children.

The nation desperately needs an open debate about racial and income inequality that includes not only reforming police policing but also must reexamine polices enacted      with the best intentions that have harmed the black and Hispanic communities.

One such act was the passage of the Dodd–Frank Wall Street Reform and Consumer Protection Act (commonly referred to as Dodd–Frank) which was enacted in 2010.  The law was the complete overhaul of financial regulations stemming from the Great Recession of 2008-09. This new law made substantial financial changes to all federal financial regulatory agencies, affecting every aspect of the nation’s financial service industry.

This new law was supposed to rein in the big banks that were responsible for the financial crisis; unfortunately the best intentions have had severe unintended consequences.   The Center for American Experiment reported that Dodd-Frank has imposed substantial new compliance costs on financial institutions, particularly small banks. The data on this is clear; small banks are not lending at the rate that they used to.  New community banks are not being formed. We used to have about 100 new banks starting every year; now we have about three, and in some years we’ve had one.

Thus, there is a huge disparity now between the health of the small-bank sector before the financial crisis and today.  Small banks are not lending, these small community banks used to serve a need especially for the black and Hispanic community.  Large banks service the wealthy not middle class Americans, or black and Hispanic communities, but are bigger than before the financial crisis.

If Dodd-Frank hadn’t eliminated small and community led banks would this have helped the black and Hispanic communities gain greater economic equality?  The small and community run banks operated by black and Hispanic individuals they were essentially providing a service to their own communities as they know the needs of their own community.  In essence they would be reversing income inequality.

The National Community Reinvestment Coalition (NCRC) findings have shown large gaps in black and Hispanic entrepreneurship when compared with Asian and white business owners. This gap is one of the fundamental causes of the racial wealth divide within the United States. The accessibility of credit is essential to establish and grow small businesses, yet lending to borrowers located in black and Hispanic neighborhoods severely lags. With the insufficient quantity of small business data, it is difficult to assess individual bank performance in small business lending.

Has the failure to implement Section 1071 of the Dodd Frank Wall Street Reform and Consumer Protection Act (Dodd Frank Act) hampered the ability of regulators and the public to comprehensively understand whether capital is allocated in an equitable way to women-owned and minority-owned small businesses, a critical component to the operation of a modern economy? Or is the regulatory burden imposed by Dodd-Frank been an anvil around the neck of black and Hispanic businesses?

As the nation wrestles with the horrific events surrounding the death of George Floyd, the country needs to not only look at policing the police, but all aspects of income and racial inequalities.  Otherwise we will be doing a disservice to the black and Hispanic communities we seek to help.