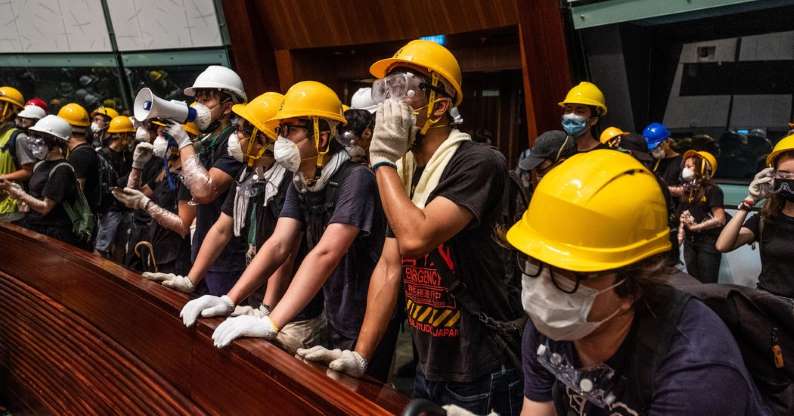 The protests in Hong Kong, leaderless but well coordinated, took a destructive turn on Monday, complicating what had been a mostly cohesive movement.

Scenes of protesters shattering glass to break into the Legislative Council building, followed by demonstrators scrawling graffiti on the walls inside and damaging furniture, caused some residents to question some of the tactics used. But many protesters defended the escalation by saying nothing else has worked, and that they were left with no choice if their demands — including the full withdrawal of a despised extradition bill — were to be met.

The resolution to the growing conflict could affect Hong Kong’s standing as an international business hub and its status as a foothold of democracy in China. Hong Kong is a semiautonomous Chinese territory with its own system of government separate from the mainland, which has mostly watched the unrest at arm’s length.

Here are the main takeaways from the recent protests, and a look at why they took a destructive turn on Monday.

There is no single leader or group deciding on or steering the strategy, tactics and goals of the movement. Instead, protesters have used forums and messaging apps to decide next steps.

Anyone can suggest a course of action, and others then vote on whether they support it. The most popular ideas rise to the top, and then people rally to make them happen.

At its best, this structure has empowered many people to participate and have their voices heard. Protesters say it keeps them all safe by not allowing the government to target specific leaders. Their success in halting the extradition bill, which was shelved by the territory’s chief executive, speaks to the movement’s power.

But that same leaderless structure’s weaknesses were on display on Monday. Such a system makes little distinction between the thousands of people who marched peacefully, the scores who vandalized the Legislative Council building, and the dozens who physically forced a path in. It also does not allow for a forceful leader who can discourage such violence. Though many aided those attacking the legislature by moving supplies through the crowd, other protesters disapproved of the destruction, driving a wedge between residents who broadly share a common ideology.

“Not too many Hong Kong citizens are able to differentiate between the radical protesters who barged into the Legislative Council and the general protesters whose agenda is peaceful and rational,” said Willy Lam, a political scientist at the Chinese University of Hong Kong.

Despite the lack of a clear leader, protesters have shown extensive coordination at the demonstrations, having planned the specifics online beforehand. Supply stations are set up to distribute water, snacks, gloves, umbrellas and shields made of cardboard. Volunteer first aid workers wear brightly colored vests. People form assembly lines to pass supplies across long distances, with protesters communicating what they need through a series of predetermined hand signals. Anyone walking in dangerous areas without a helmet or a mask is quickly offered one.

Still, no individual can speak on behalf of the protesters, which makes negotiations difficult, if not impossible. Mr. Lam called the lack of a leader a potential “fatal weakness” of the movement, allowing a small group of destructive protesters to set the tone for the entire group.

Carrie Lam, Hong Kong’s chief executive, had plenty of political support in the territory’s pro-Beijing legislature to pass a bill that would allow extraditions to mainland China. The legislators were set to begin discussing the bill in early June, and intended to vote on it just weeks later.

After a June 16 protest saw the largest turnout yet, Ms. Lam made a major concession: She postponed the bill, at least temporarily.

It was an undeniable victory for the protesters — but it did little to quell the unrest. Since the bill could later be reintroduced, protesters felt they remained in danger.

The police tactics to break up the demonstrations on June 12, including the use of more than 150 tear gas canisters to push protesters far away from the government office, created a new set of demands from the protesters. Now, instead of just calling for the withdrawal of the bill and Ms. Lam’s resignation, they said they wouldn’t be content unless there was an independent investigation of officers’ conduct. They also wanted the release of protesters arrested on June 12, and for the government to rescind its description of the demonstrations as a “riot,” a designation that carries legal significance.

None of that has happened. Many analysts say Ms. Lam is unlikely to step down, nor would Beijing accept her resignation if she offered it. She has more wiggle room on the other demands, but has not indicated any willingness to budge.

It sets the stage for a protracted conflict.

China is reluctant to get too involved

Just a few minutes’ walk away from the Legislative Council building, the People’s Liberation Army, China’s military, has an outpost with thousands of combat-ready soldiers ready to do Beijing’s bidding. But they have remained on the sidelines, even as the extended protests have turned violent and pose a political threat to President Xi Jinping.

Ivan Choy, a political scientist at Chinese University of Hong Kong, said deploying the army would be a last resort and a worst-case scenario for Mr. Xi. It would be widely seen as China reneging on the autonomy Beijing promised when Britain handed Hong Kong back to China in 1997.

“If the P.L.A. came out last night, it would seriously undermine confidence in ‘one country, two systems’ of the Hong Kong people and also the international community,” Mr. Choy said on Tuesday.

Mr. Xi still prefers to let Hong Kong officials handle the situation, he said. Hong Kong’s successful self-governance is important for China’s international image, and its failure would be a major black eye for the president.

But some in the Chinese government could use Monday’s escalation to justify tightening Hong Kong policies. They could also argue against making the concessions protesters seek, painting them as radicals who won’t be satisfied.

Businesses are watching, but haven’t flinched

The international business community that has made Hong Kong such a crucial economic center did not bat an eye at Monday’s protests. Hong Kong’s stock market was up on Tuesday, indicating little concern that the protests have crossed a worrisome red line.

A collapse of Hong Kong’s autonomy — or a lack of confidence that law and order could be upheld — would cause businesses to scramble for a new home in Asia. Several business groups spoke out against the extradition bill, while more expressed concern privately.

Most have had little to say about the protests. But the American Chamber of Commerce in Hong Kong condemned the protesters’ behavior in a statement on Tuesday.

“We believe the violent protests of recent days do not reflect how the majority of people in this dynamic and advanced economy would choose to be heard,” it said. “We sincerely hope that Hong Kong will find ways for communication and collaboration between the government and the public in order to bring out the best of what Hong Kong has to offer as a premier business and financial hub.”